Escaped prisoner David Sweat is in stable condition after he was shot by a New York State trooper Sunday afternoon just a mile and a half from the Canadian border.

Sergeant Jay Cook shot Sweat, 35, twice in the torso during a chase in a field near Constable, N.Y., when he saw that he might make it to a tree-line and evade him, said New York State Police Superintendent Joseph D’Amico at a press conference Sunday evening.

Sweat was then taken to the Alice Hyde Medical Center in Malone and will be taken to a trauma center at another hospital soon, D’Amico said. Sweat was unarmed when he was captured.

The incident began during a routine patrol when Cook, who was alone, spotted Sweat walking on a roadway, called out to a man walking on a roadway and then recognized him as the escaped prisoner, D’Amico said. He added that police now believe Sweat and fellow escapee Richard Matt, who was shot dead by federal officials on Friday, were using “picnic-style pepper shakers” to spread pepper to conceal their trail.

“We did have difficulty tracking, so it was fairly effective,” he said.

New York Gov. Andrew Cuomo said he called Cook to congratulate him on his police work, joking with him about how his teen-aged daughters would react.

“You go home tonight and tell your daughters that you’re a hero,” Cuomo said he told the sergeant. “With teen-aged girls, that’ll last about 24 hours and you’ll go back to being a regular dad.”

Following the death of Matt, police redoubled their efforts with more than 1,300 officers searching for the remaining escapee. With officers on the ground and support from K-9 and aviation units, officers honed in on the 22-mile area where Sweat was found Sunday, despite unseasonably cold weather.

Sunday’s shooting brings to an end a three-week manhunt for the escaped pair, who managed to break free after befriending a prison worker and tunneling through prison walls. Bruises, bug bites and blisters found in Matt’s autopsy suggest that the prisoners had been living in the woods since their escape. 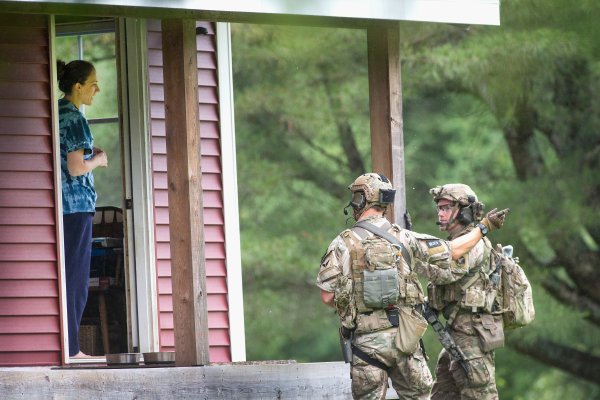 Bad Weather Could Hinder Manhunt for Escaped Inmate
Next Up: Editor's Pick