How Serious a Setback Is the SpaceX Rocket Explosion?

There are uncountable laws of physics and engineering that govern the launch of a rocket. But there’s one that supersedes them all: Ultimately, stuff will blow up. Always has, always will.

Elon Musk had never come face to face with that rule before — at least not in space travel — but Sunday morning he did in a very big way, when his Falcon 9 rocket and unmanned Dragon cargo vehicle exploded just two and a half minutes after launch. The rocket came undone before its first stage had even shut down and separated, blowing itself to pieces and auguring into the Atlantic just off the Cape Canaveral coast.

NASA, as NASA does, initially framed the failure as clinically as possible, describing it as a “non-nominal” liftoff. But NASA administrator Charles Bolden later described the agency as “disappointed” by the loss of the mission. “We will work closely with SpaceX to understand what happened, fix the problem and return to flight,” he said. “This is a reminder that spaceflight is an incredible challenge, but we learn from each success and each setback.”

Musk himself was more candid, if a little oblique:

But the most poignant and most apt response came from astronaut Scott Kelly, currently completing the third month of his marathon year aboard the International Space Station:

And so space is—very, very hard, and it’s the International Space Station (ISS) that has recently been paying the price. In April, a Russian Progress cargo vehicle carrying thousands of pounds of equipment and supplies reached orbit but spun out of control and eventually plunged back through the atmosphere, incinerating itself and its cargo. In October 2014, an Antares rocket—built by Musk’s cargo competitor Orbital Sciences—exploded just six seconds off the pad.

But it’s the SpaceX explosion that will prove the most costly. The key piece of cargo the now-destroyed Dragon was carrying was the first of a pair of International Docking Adapters (IDA) that was supposed to connect to the station’s Harmony module and serve as the attachment node for private crew vehicles that are scheduled to begin flying in 2017. Two companies won the contracts to build the new craft—SpaceX, which is modifying its Dragon craft to make it habitable; and Boeing, which is building a new vehicle dubbed the CST-100. Boeing built the lost IDA as well, but both companies are designing their craft to be compatible with it.

How big a setback this will be to the future of station operations is not clear. The current three-person crew—which will increase to six when the next expedition launches from Kazakhstan in July—is in no danger of running out of essential supplies like food, water and breathable oxygen. But luxuries like personal packages from family members and perishables like fresh fruit can make it aboard only as often as the cargo runs succeed.

The docking adapter is another matter, however. One of the biggest action items on the astronauts’ to-do-list for the next few months is reconfiguring ISS’s various modules to ready the station for the new crew vehicles. Kelly and soon-to-arrive crewmate Kjell Lindgren will be embarking on their first spacewalks to help get that job done. Without the IDA, however, the work can only proceed so far.

Worse, the Obama White House and NASA itself have bet their space reps on NASA’s ability to make a smooth transition to private suppliers for trips to low Earth orbit, freeing the space agency to focus on unmanned missions to the planets and, eventually, manned trips to deep space. Serial failures by Orbital Sciences and SpaceX do not do much to boost confidence in that plan.

Geopolitics play a role too. American leverage in the increasingly strained relationship between Washington and Moscow has not been helped by the fact that, since the grounding of the shuttles, the U.S. has been entirely dependent on the Russian Soyuz rocket to carry astronauts to space.

In response to the U.S. and European measures to clamp down on Russian banking and overseas assets in the wake of the invasion of Ukraine, Russian Deputy Prime Minister Dmitry Rogozin snarkily Tweeted, “After analyzing the sanctions against our space industry, I suggest to the USA to bring their astronauts to the International Space Station using a trampoline.”

Rogozin was bluffing. Russia charges the U.S. more than $70 million per seat for trips on the Soyuz and a cash-poor Kremlin is not inclined to say no to the ready pocket money. But it was galling at least for the U.S., and nobody in Washington or at NASA wants America’s dependency on the Russians to go on any longer than it absolutely has to go.

That, however, is for tomorrow. Today, Musk, who is experiencing his first major launch failure, must dig into his telemetry and the remains of his rocket and see what in the world went wrong. He’s not the first to have to conduct such a post-flight autopsy and he won’t be the last. Space is always hard—and on some days it’s too hard. 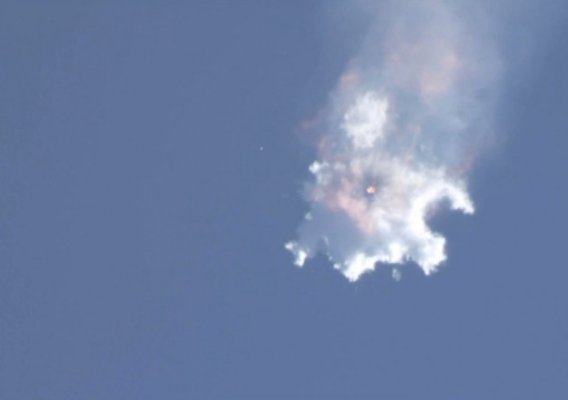