Here's Where Same-Sex Marriages Are Still Being Blocked in the U.S.

A man waves a marriage equality flag in front of The Supreme Court following the decision in favor of same-sex marriage in Washington, DC, on June 26, 2015.
Brittany Greeson—The Washington Post/Getty Images
By Justin Worland

The U.S. Supreme Court struck down prohibitions on same-sex marriage in all 50 states on Friday, in a ruling embraced as a historic moment for LGBT rights.

But now the ruling has to be implemented — and many counties in Southern states where marriages between partners of the same sex had been either outlawed or not recognized are not rushing to change their policies in the wake of the ruling, and in some cases are actively delaying it coming into effect.

Here’s a look at how some states have responded:

Louisiana
Governor Bobby Jindal, a vocal opponent of same-sex marriage, has authority over marriage licenses in the city of New Orleans and has said that the city cannot issue licenses to same-sex couples until the local federal court specifically orders them to. Implementation of the court ruling has also been held up in other parts of the state: Louisiana attorney general Buddy Caldwell told the state’s 63 other parishes to wait 25 days before issuing licenses, according to the Times-Picayune.

Texas
Confusion reigns in the Lone Star State, where attorney general Ken Paxton told county clerks before the ruling not to issue any licenses if it was upheld, until he passed along word to do so. But the ruling came and Paxton has reportedly had nothing to say, according to the Houston Chronicle. Still, some more liberal counties have begun issuing same-sex marriage licenses on their own.

Mississippi
The state is waiting for the local federal court to order county clerks to begin issuing same-sex marriage licenses, per a statement from state attorney general Jim Hood. Another official, Mississippi judiciary chairman Andy Gipson, suggested that the state should consider not issuing marriage licenses altogether as a result of the ruling, according to the Clarion-Ledger. 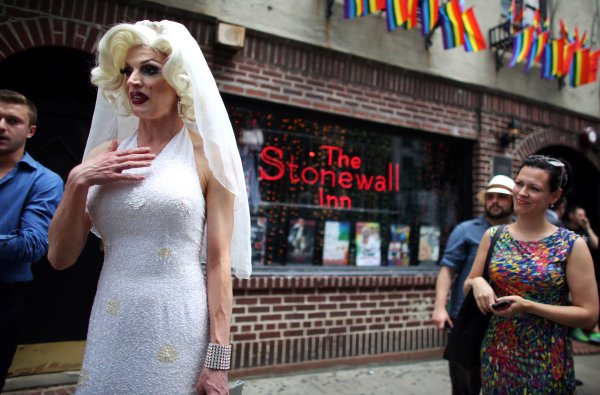 See the Celebration at Stonewall Inn After Gay Marriage Ruling
Next Up: Editor's Pick