President Obama delivered a stirring eulogy and meditation on the nature of grace at the funeral of Rev. Clementa Pinckney Friday, one week after the pastor and eight others were gunned down in a church.

For a little over 30 minutes, Obama traded his typical even tone for a more rousing preacherly style, bringing the crowd of thousands at College of Charleston’s TD Arena, to its feet again and again. At one point, he even sang “Amazing Grace,” a hymn written by a reformed slave-trader who converted to Christianity.

Though the touchstone of his remarks was Pinckney, Obama blended personal remembrances with calls for political renewal and a recurring theological discussion of grace, evoking the very kinds of sermons an AME pastor might give.

He referred to Pinckney, who also served as a Democratic state senator, as a “good man,” and noted that though he didn’t know Pinckney well, he did have the pleasure of knowing him.

Upon meeting the man who friends and family members have said was “anointed,” and destined to be a public servant and leader, Obama said he was drawn to his “graciousness” and “reassuring baritone.” Pinckney in many ways fulfilled the destiny those around him prophesized, entering the pulpit at age 13, getting ordained by 18 and later becoming the youngest black person ever elected to the state legislature.

Obama said Pinckney was, “wise beyond his years in his speech, conduct, in his love, faith, and purity.”

“What a good man,” Obama said of Pinckney. “Sometimes I think that’s the best thing to hope for when you’re eulogized. After all the words and recitations and resumes are read, just to say somebody was a good man.”

Obama remarked that he was proud of Republican Gov. Nikki Haley for calling for the removal of the Confederate flag at the South Carolina state capitol. The alleged killer in last week’s massacre, Dylann Roof, was found to have embraced the flag and a white supremacist mindset that would later fuel his hatred and lead him to open fire in Emanuel AME Church.

Obama would later recall the names of each of the nine victims of last week’s massacre, noting that they had all found grace — a grace that Obama said the alleged killer couldn’t have known they possessed when he entered the church with the intention of ending their lives.

“Blinded by hatred, the alleged killer could not see the grace surrounding Pinckney and that Bible study group,” Obama said.

Grace, the president noted, was the virtue he’d been reminded up in the week since the brutal killing. “Grace,” he said, “ is the free and benevolent favor of God.”

“As a nation, out of this terrible tragedy, God has visited grace upon us,” he said. “For he has allowed us to see where he have been blind.”

But the politics of the moment were not lost on the president. Obama again called for serious reflection on gun reform and gun violence. “I’m convinced that by acknowledging the pain and loss of others, even as we respect the traditions and ways of life that make up this beloved country,” Obama said, “by making the moral choice to change, we express God’s grace.”

Obama called on the nation not to retreat into a “comfortable silence” in the wake of last week’s tragedy in hopes that by refusing to do so, despite the lack of movement on policies from gun control and ongoing debates on race relations.

“It would be a betrayal of everything Rev. Pinckney stood for, I believe, if we allowed ourselves to slip into a comfortable silence again,” Obama said. 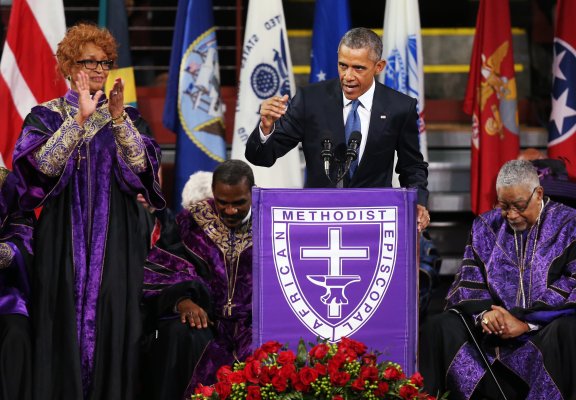