Emilia Clarke Defends Abuse Toward Women in Game of Thrones

It’s never easy for any character on Game of Thrones, no matter the gender. (Just ask Jon Snow.) But women seemed to have a particularly rough go of it in season 5, from Ramsay Bolton’s treatment of Sansa Stark to Cersei’s naked walk of shame.

Such sequences sent social media into overdrive, but not all the reaction was positive, with many criticizing the prevalent physical and emotional abuse directed at female characters. We asked Daenerys herself, Emilia Clarke, about this when she stopped by EW Morning Live on Entertainment Weekly Radio (SiriusXM, channel 105), and Clarke shared her reaction to fan and media criticism about the treatment of women on the show.

“Well, obviously, it’s never nice hearing criticism about something that you, and you know everybody else puts their heart, soul, blood, sweat, and tears into,” said Clarke. “But in the same breath, it’s a shocking show so it’s going to invite commentary that everybody is free to have about the show. So I think it’s a couple of things, because I mean, as an actor, it’s bizarre, because you’ll relish those dark moments that allow you to get your teeth into a character and really kind of explore the darker depths to the reality of life and things that happen every day. But I think the thing that’s important to remember is that sadly, first and foremost, it’s a story that we’re telling that is make-believe—that is based in a fantastical world. So, whilst there is a political commentary that people can take from the show because that is everyone’s right to do so, I think not taking it too seriously is kind of the key here. So yeah, that’s kind of what I think, basically.”

There you have it. Khaleesi has spoken! And you can hear her thoughts on the subject for yourself by clicking on the SoundCloud audio clip below. 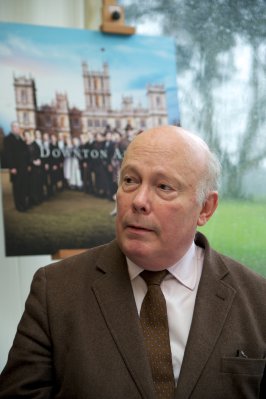 Downton Abbey Creator: I Didn't Want to End the Show With Nazis
Next Up: Editor's Pick