Gay Americans who were already celebrating their birthday this Friday got an extra surprise: the constitutional right to same-sex marriage in all 50 states.

Monet Sutton, who celebrated her 24th birthday on Friday, was driving into Washington for some red velvet cupcakes with her cousin when she heard the news. “Words can’t describe how I feel right now,” she told TIME over the phone. “I literally just stopped crying. I may start crying again!”

Sutton, who works for a radio station in Virginia Beach, married her wife Kayla just three weeks ago, less than a year after Virginia legally recognized same-sex marriage in October 2014.

“I grew up feeling like my government wasn’t on my side,” Sutton said of the landmark national ruling. “With this decision I feel like they are finally seeing me and my wife as people. We can move to any state and our marriage will be acknowledged as being just as legitimate as any other.”

Jesse Stommel, a professor at the University of Wisconsin-Madison, was more or less bedridden with a broken ankle on his 39th birthday on Friday. Still, Stommel was thrilled by the Supreme Court decision.

“Twenty years ago I don’t think I could have imagined that this would happen in my lifetime,” said Stommel, who married his partner of eight years on June 13, 2014, in the final hour of a week-long stretch in which gay marriage was legal in the state of Wisconsin.

“On that Thursday night, I said to my partner, ‘What are you doing tomorrow? Want to get married?’” Stommel recalled. The couple married in an impromptu ceremony the following day at noon—which Stommel, who says he’s usually pretty private on Twitter, live tweeted.

“Some things need to be public,” Stommel told TIME. “This was something we needed to loudly proclaim.”

Stommel and Sutton weren’t alone in their double celebrations on Friday. Here’s what other Americans had to say about the gay marriage ruling falling on their birthdays: 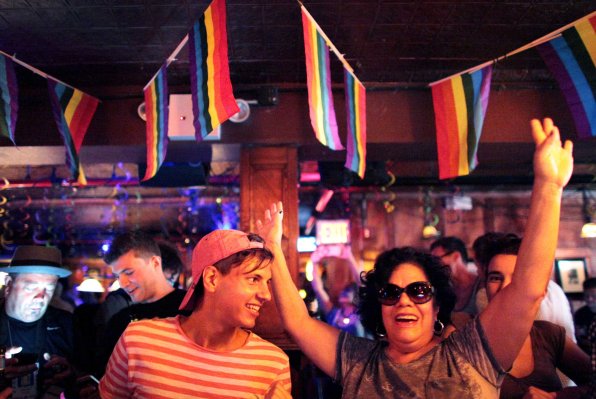 Crowds at Stonewall Inn Celebrate Gay Rights Victory Decades in the Making
Next Up: Editor's Pick