President Obama declared “our union a little more perfect” on Friday after the Supreme Court ruled same-sex couples have the constitutional right to marriage.

Speaking from the Rose Garden on the second day in a row that the Supreme Court handed down a historic ruling, Obama said Friday’s landmark decision could be credited not only to the Supreme Court, but also to the “countless small acts of courage” of gays, lesbians and allies who stood strong in the face of adversity over decades.

“What a vindication of the belief that ordinary people can do extraordinary things,” Obama said Friday, speaking for just under 10 minutes. “What a reminder of what Bobby Kennedy once said about how small actions can be like pebbles being thrown into a still lake and ripples of hope cascade outwards and change the world.”

Though many Republican lawmakers stand firm in their belief that marriage should be between a man and a woman, there has been a seismic shift in the country’s feeling on the subject. On Friday, the Supreme Court affirmed that point of view, declaring that states do not have the right to keep same-sex couples from getting married, and that gay and lesbian couples have the legal right to marry in the U.S.

Obama’s celebration of Friday’s ruling came just one day after he declared “victory” for his signature health care law, which the Supreme Court saved from being upended, and he used the same word to describe the same-sex marriage decision.

Obama said that though the U.S. was founded on the principle that all were created equal, each generation has faced its own test to ensure that those words ring true for all.

“Progress on this journey often comes in small increments. Sometimes two steps forward, one step back, compelled by the persistent effort of dedicated citizens,” he said. “And then sometimes there are days like this, when that slow, steady effort is rewarded with justice that arrives like a thunderbolt.” 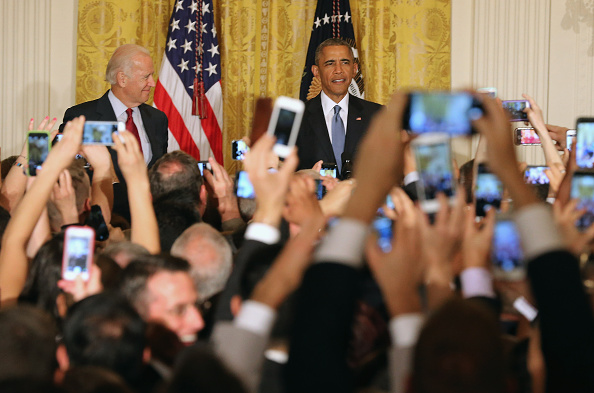 Watch a Mashup of President Obama Getting Heckled
Next Up: Editor's Pick