Inside the Love Story That Changed the Gay Marriage Battle

Friday’s Supreme Court decision making gay marriage a legal right in the U.S. is the culmination of work by many activists in the gay and lesbian community.

One of those unlikely activists is Edith Windsor, a feisty and loving former computer programmer who lived an ordinary and happy life, but whose legal battle for spousal rights led to the first high-court victory for gay marriage in 2013.

“I’m thrilled. I’m absolutely thrilled,” she said of the decision. “It’s not an end in itself, but it does give us an enormous amount of joy, and pleasure, and possibility. It’s another step on the way to total equality.”

Even in her joy, she spoke passionately about the many gay people who still suffer as a result of inequality: “Every gay person is not feeling that joy today. There are kids in the streets and people who are hungry and isolated, and hopefully we go next for total equality.”

After Windsor’s spouse Thea Spyer died in 2009, leaving Windsor her entire estate, Windsor fought for the spousal exemption to the estate tax that gay couples were denied under the Defense of Marriage Act. After hearing Windsor’s case, on June 26, 2013, the Supreme Court found DOMA unconstitutional, thus ending the federal ban on gay marriage.

That decision was a huge win in itself, but it also paved the way for today’s victory for the LGBT movement. Partly due to the Supreme Court ruling in the Windsor case, several more states have since changed their marriage laws. Thirty-six states, home to more than 70% of Americans, now allow gay marriage.

In 2013, Windsor was one of TIME’s Persons of the Year. As part of that project, TIME’s deputy photo editor Paul Moakley created this lovely video of Windsor talking about photographs she and Spyer had taken over 40 years together. Their marriage in 2007 would ultimately change history, but their relationship is also an inspiring love story for any married couple.

Windsor thanked many people for their role in Friday’s court decision. She called Jim Obergefell, the plaintiff in the case, the gay movement’s “next hero.” “I thank Supreme Court for once again proving to me that the Constitution of this country does matter and that justice will prevail.” 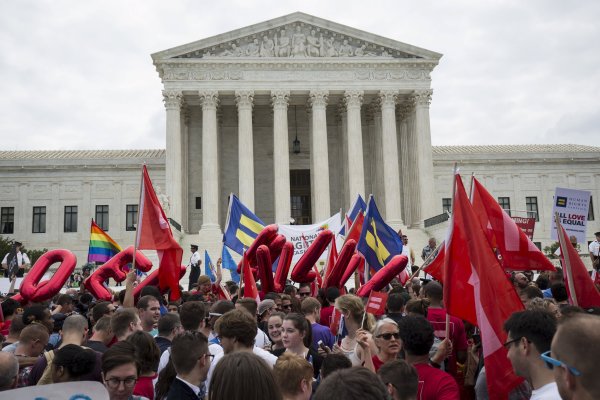 21 Other Countries Where Same-Sex Marriage Is Legal Nationwide
Next Up: Editor's Pick