In a day of terror and bloodshed on Friday, Islamist attackers possibly aligned with the Islamic State of Greater Iraq and Syria (ISIS), launched three separate assaults thousands of miles apart — in France, Tunisia and Kuwait — creating an impression that the group had adopted a new tactic of launching punitive external attacks rather than just focusing on state-building and territorial acquisition.

The attacks, which killed at least 54 people, had little obvious connection to one another except the assailants’ suspected inspiration from ISIS. Yet their rapid succession, one after the other, seemed more than a coincidence to some experts, who warned that it could become increasingly difficult for officials to ward off such threats. “It is very unusual to have three separate attacks on the same day,” Sujjan Gohel, a terrorism expert at the London School of Economics, told CNN. ISIS, he said, is “spreading the message, getting their doctrine out, encouraging followers.”

The day’s lethal attacks began shortly after 10 a.m. in France, when at least one man rammed their car into the plant of a U.S. industrial-gas company near the French city of Lyon, and then decapitated one man and scrawled Arabic writing on his severed head, according to police.

Within hours of that attack, at least one gunman opened fire on a beach packed with European tourists in Sousse, Tunisia killing at least 28 people. That assault came little more than three months after two ISIS gunmen killed 21 tourists, most of them European, at the Bardo Museum in the capital Tunis.

Kuwaiti security forces gather outside the Shii'te Al-Imam al-Sadeq mosque after it was targeted by a suicide bombing during Friday prayers in Kuwait City, on June 26, 2015,
Yasser Al-Zayyat—AFP/Getty Images

Shortly after that an attacker whom witnesses described as a man in his 20s entered a Shi’ite mosque in Kuwait City and blew himself up while people prayed killing at least 25. ISIS quickly claimed responsibility for that attack. If that is correct, Friday’s assault is the first the group has carried out in the Sunni countries of the Persian Gulf.

The anniversary of its declaration of a caliphate, or holy Islamic state, by ISIS leader Abu Bakr al-Baghdadi is on June 29. Since last June, there have been numerous attacks carried out in the name of the organization — some with just one attacker — in places as far afield as Copenhagen and Sydney.

Friday’s events come days after ISIS spokesman Abu Muhammad al-Adnani urged supporters all over the world to turn the holy month of Ramadan into “a time of “calamity for the infidels … Shias and apostate Muslims.”

Since ISIS established itself in Syria in 2013, its fighters have focused on gaining territory and imposing their control on it. Unlike al-Qaeda, they have avoided attacks outside their immediate theatre of operation. But this week a group of ISIS fighters infiltrated the Kurish town of Kobane, which they were forced out of earlier this year. Their attack did appear to be part of a concerted effort to re-take it. Rather, the attack seemed punitive and left more than 120 Kurdish fighters and civilians dead.

The attacks in Kobane, France, Tunisia and Kuwait do not appear to have any military purpose and may suggest that ISIS has decided to pursue its war for territory in tandem with its war against the world of unbelievers, which includes almost everyone.

Police and security will increase their vigilance. On Friday, all seemed caught off guard — a sign of how difficult it is to avert terror attacks by an organization whose followers are scattered across the world, and who appear to act without any direct central command.

Police officers control the crowd, while surrounding a man suspected to be involved in opening fire on a beachside hotel in Sousse, Tunisia, as a woman reacts, on June 26, 2015.
Amine Ben Aziza—Reuters

In Tunisia, officials have waged a tough battle against ISIS since the Bardo attack. Around 3,000 Tunisians are estimated to fight with ISIS, making Tunisis the largest supplier of fighters. The Bardo attackers were believed to have returned to Tunisia from ISIS’s Libyan offshoot.

Tunisia, whose economy depends on European tourists, has scrambled to reassure Westerners that its country, a democracy and the birthplace of the 2011 Arab Spring revolutions, is safe. Tunisia’s tourism agency published posters reading, “Keep Calm and Visit Tunisia.” That assurance might be hard to believe for many European holidaymakers now, especially in France, which retains close ties to its former French-speaking colony. “Tunisia’s economy is heavily dependent on tourism, and that revenue is now about to all but disappear,” Geoff Porter, CEO of the North Africa Risk Consulting, told clients after Friday’s attack. The tourist killings, he said, is “leaving Tunisia in dire straits at a critical junction in its political transition.”

The attacks come nearly six months after three French gunmen waged the worst terrorist attacks in decades in Paris, killing a total of 17 people in an assault on the Charlie Hebdo satirical magazine and on a kosher supermarket in a Parisian suburb. One claimed his allegiance to ISIS, while the other two said they were operating under instructions from the Yemen-based al-Qaeda in the Arabian Peninsula; all three were killed as the police moved in.

French officials believe about 3,000 French citizens have fought with various jihadist groups in Syria since 2011, and that hundreds might be back home, perhaps battle-trained and battle-ready. Yet none of the three January attackers had been in Syria, underscoring how complicated it is for police to monitor every possible terror operative.

After January attacks, French officials increased security and surveillance. But Friday’s attacks made clear that such ramped-up security and surveillance go only so far. The attack outside Lyon was in an industrial zone, far from high-profile sites in Paris. And while the Charlie Hebdo terrorists armed themselves with Kalashnikov rifles and grenades, the attackers on Friday used just their car as their weapon, and perhaps a knife for the beheading. France’s internal intelligence agency, the DSGI, reported that they had knowledge of the man the police had arrested, and that he was a Lyon resident. Even so, Minister of Interior Bernard Cazeneuve told reporters later that the man had no criminal convictions, a fact that might have made him a lesser target of surveillance. 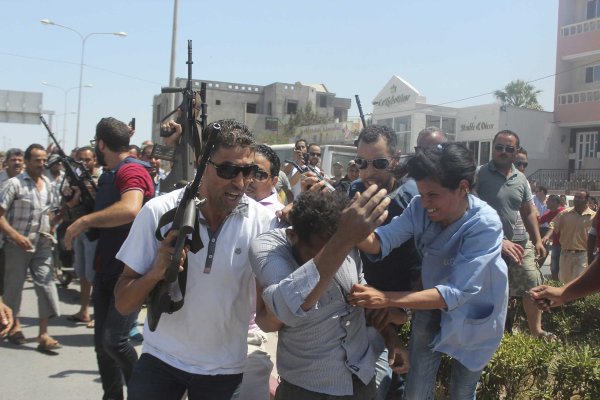 37 Dead After Gunmen Attack Tunisia Hotel
Next Up: Editor's Pick