Rev. Clementa Pinckney to Be Laid to Rest in Charleston

Members of the clergy wait to enter the funeral service where U.S. President Barack Obama will deliver the eulogy for South Carolina State senator and Rev. Clementa Pinckney who was killed along with eight others in a mass shooting June 26, 2015 in Charleston, S.C.
Win McNamee—Getty Images
By Charlotte Alter

Thousands gathered in Charleston, South Carolina on Friday for the funeral of Rev. Clementa Pinckney, the state senator who was shot dead with eight other worshippers in the Emanuel A.M.E. Church last week.

So many people lined up outside the TD Arena at the College of Charleston to pay their respects to Rev. Pinckney that the Red Cross is handing out bottles of water to attendees who might be at risk for heat exhaustion. Mourners started lining up at 4 a.m., the Charleston Post-Courier reports. President Obama gave an emotional address, in which he sang a passionate rendition of ‘Amazing Grace.’

Pinckney, who was both a prolific minister and a state senator, was considered one of the most respected figures in South Carolina before his death just weeks before his 42nd birthday. Called to the pulpit at 13, he became an ordained minister at 18.

He believed that political action goes hand-in-hand with worship, so at 23 he became the youngest elected black member of the South Carolina House of legislature, where he championed legislation for police body cameras, background checks for buyers of assault weapons, and insurance coverage for smoking cessation programs. He even considered supporting a casino in his district, because even though as a pastor he disapproved of gambling, he knew his constituents needed jobs.

“I always told him, ‘You’re going to be a national political figure,’” legislative aide Helen Pittman told the New York Times. “I’d like to scrub those words out of my mouth, because now he is.”

Many of Pinckney’s friends and family members spoke at the funeral. U.S. Rep. Jim Clyburn (D-SC) also spoke, encouraging mourners not to let the tragedy of Pinckney’s death cast a shadow across all he worked to achieve. “We’ve seen too many victories to let defeat have the last word,” he said.

Pinckney is survived by his wife and two young daughters, Eliana and Malana. Both girls wrote notes to their late father which were included in the funeral program. “Although he may be gone, he’s here with me all day and night long,” wrote Eliana. “I know you were shot at the Church and you went to Heaven. I love you so much!” wrote Malana, who signed her note, “your baby girl and grasshopper.” 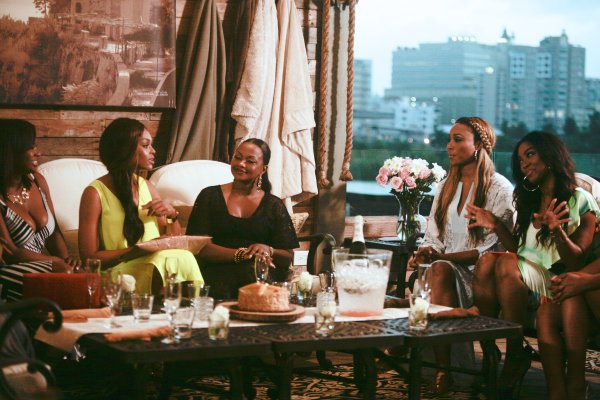 How Bravo TV Is Helping End Racism in America
Next Up: Editor's Pick