Donald Trump Leads All But Bush in New Hampshire

Donald Trump gives a speech as he announces his candidacy for the U.S. presidency at Trump Tower on June 16, 2015 in New York City.
Christopher Gregory—Getty Images
By Philip Elliott

Apparently, Donald Trump for President is a thing in New Hampshire.

A second public poll released this week shows the real estate mogul-turned-reality show star ahead of all other Republican presidential hopefuls except former Florida Gov. Jeb Bush. Earlier this week, when a Suffolk University poll showed Trump in the No. 2 spot in New Hampshire, some dismissed it as a fluke. Then on Thursday, a CNN and New Hampshire’s WMUR-TV showed the same. It is part of a one-two win for Trump this week, yet it also comes as Trump’s former business partners are moving away from the tough-talking bully and his incendiary comments about China, Mexico and immigrants.

While Trump is nipping at Bush’s heels, the polling also shows potential problems, including that few voters believe he has a chance at the White House. Trump is a recent addition to the race and none of his rivals have yet to treat him like a viable candidate. A trove of negative research is at the ready for his foes, Republicans and Democrats alike, to use against him. His record in business is certain to be a liability, much the way former Massachusetts Gov. Mitt Romney spent most of his 2012 campaign on the defense against charges his work in private equity hurt workers and communities.

And as Trump’s advisers were touting the new polls, they were also going to battle with Univision, Trump’s broadcast partner for the Miss Universe and Miss USA pageants. Trump’s lawyers said they were preparing to sue Univision for breaking its $13.5 million contract with the Miss Universe Organization, which Trump co-owns.

When Trump began his White House bid on Wednesday with a rambling speech, he said Mexicans coming to the U.S. were rapists and criminal. (“Some, I assume, are good people,” he added as an aside, as though that fixed everything.) Trump also said he would build a great, great wall on the U.S.-Mexican border. He later blamed the media for distorting his words.

Univision, a Spanish-language channel popular with Latinos, said it would not be broadcasting the Miss USA pageant on July 12. No matter, Trump said with typical bravado. He was still a star.

Voters in New Hampshire, at least for the moment, seem to share that view of the brash and blunt New Yorker. Jobs and the economy remain the top focus for New Hampshire Republicans, and Trump leads when voters asked who they best trust to address that subject. He also leads all others when voters were asked which candidate is least likely to act like a politician and who could handle international trade policy. He spent much of his kick-off speech railing against China, a key U.S. trading partner.

He also leads in another field: the candidate the most New Hampshire voters say they most definitely would not vote for. A full 23% of those surveyed said Trump is a non-starter. Trump is in negative territory when voters were asked their general opinion of him: 48% of New Hampshire voters see him unfavorably, while 38% look at him favorably.

At the same time, only 7% of those surveyed see Trump as having the best chance among Republicans to win the general election in November 2016. The clear frontrunner on that question is Bush: 37% see him as the best shot for the GOP to return to the White House for the first time since another Bush moved out. Jeb Bush’s brother, George W. Bush, ended his Presidency on Jan. 20, 2009.

The CNN/ WMUR New Hampshire Primary Poll was conducted between June 18 and June 24. The poll, considered one of the most reliable in New Hampshire, interviewed 402 like Republican primary voters and carries a margin of sampling error of plus or minus 5 percentage points. That could mean the number of New Hampshire voters who say they wouldn’t support Trump could be as high as 28%. 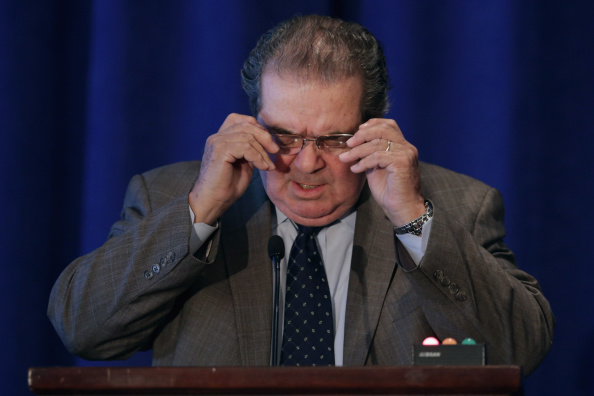 The Two Harshest Words Antonin Scalia Used Against Obamacare
Next Up: Editor's Pick