An embattled ministry building a replica of Noah’s Ark in Kentucky is getting a boost, thanks to the Amish.

According to the Cincinnati Enquirer, Amish communities in Indiana, Kentucky, Ohio and Pennsylvania are helping Answers in Genesis—a non-profit Christian ministry that advocates creationism—build Ark Encounter, the multi-million dollar theme park that the ministry says will include a full-size replica of the Biblical ark.

The project, first proposed in 2010, experienced a setback late last year when Kentucky officials denied $18 million in tax incentives to the group. The state’s tourism board said the project had “evolved from a tourism attraction to an extension of AiG’s ministry” and that state incentives would violate the separation between church and state.

State officials cited the group’s hiring requirements, which mandated that future employees give a “salvation statement” and believe that God created the world. AiG sued the state, accusing it of discriminating against the group based on its religious views.

Still, construction is reportedly underway on the 510-foot-long ark even without the tax incentives with the help of a number of Amish workers, who are working on the ark’s wooden structure. AiG says any state incentives will go to future expansions of the park. It plans to open Ark Encounter in the summer of 2016. 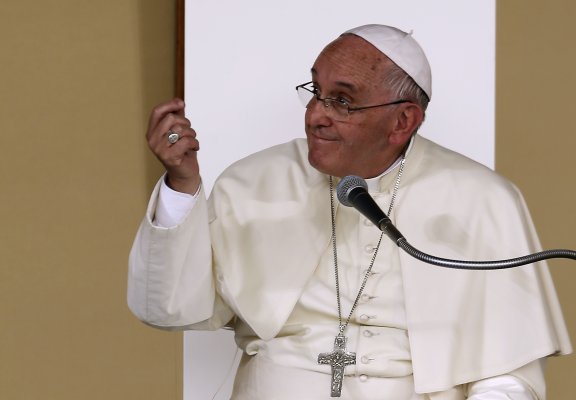 Pope Francis Says It's Un-Christian to Make Weapons
Next Up: Editor's Pick