Apple’s Co-founder: We’re All Going to Be Robots’ Pets One Day

Speaking at a recent technology conference, Wozniak said that at first the thought of artificially intelligent beings in charge of everything scared him. But now it’s a comforting thought.

Fast forward hundreds of years to when robots are in charge. At that time, humans will probably be treated in a similar fashion to dogs, Wozniak said during an event at the Freescale Technology Forum 2015 in Austin, Texas.

“It’s actually going to turn out really good for humans,” he added. “And it will be hundreds of years down the stream before [artificially intelligent beings would] even have the ability.”

“They’ll be so smart by then that they’ll know they have to keep nature, and humans are part of nature,” he continued. “So I got over my fear that we’d be replaced by computers.”

Wozniak believes robots will helps us because we’re the “gods originally.”

At the event, Wozniak also took the time to discuss the Internet of Things. He likes it, but cautioned that connected devices in the home have the potential to attack humanity.

Wozniak isn’t the only tech leader with thoughts on future human and robot interaction. In a recent interview with scientist Neil deGrasse Tyson, Tesla’s CEO Elon Musk warned that robots will use humans as pets once they achieve a level of artificial intelligence known as “superintelligence.” 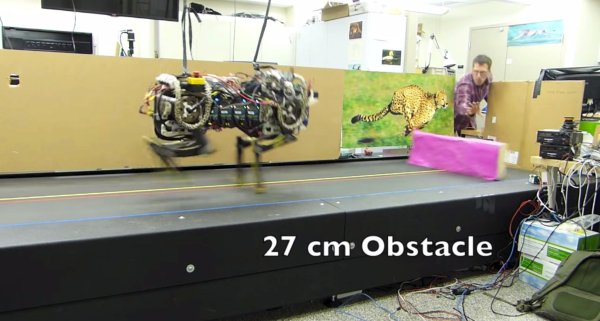 Watch the Scariest Robot in the World Jump Over Stuff Automatically
Next Up: Editor's Pick