President Obama took a brief victory lap over the Affordable Care Act before saying it was time to get back to work.

Speaking from the Rose Garden a little over an hour after the Supreme Court ruled in favor of keeping in place subsidies that make insurance affordable, the President declared victory for his signature health law.

“The Affordable Care Act is here to stay,” Obama said. “Today is a victory for hard working Americans all across this country whose lives will continue to become more secure in a changing economy because of this law.”

After five years, over 50 Congressional votes for its repeal and two Supreme Court decisions, Obama said the law is now “woven into the fabric of America” and won’t be unraveled.

Under the Affordable Care Act, over 16 million previously uninsured people have gained coverage. The uninsured rate has dropped dramatically and millions have access to subsidies that makes their new insurance plans more affordable.

‘This is not an abstract thing any more. This is not a set of political talking points. This is reality,” Obama said.

Still, the political debate over the Affordable Care Act has loomed large of the last three election cycles, and there are signs it may continue in 2016. Republican lawmakers and presidential contenders have vowed to make replacing the law their top priority once Obama leaves office. A number of Republican states have yet to expand Medicaid coverage under the law.

But in the Rose Garden, Obama vowed to “keep working” to get more Americans covered.

“With this case behind us, let’s be clear, we’ve got work to do to make health care in America even better,” he said. 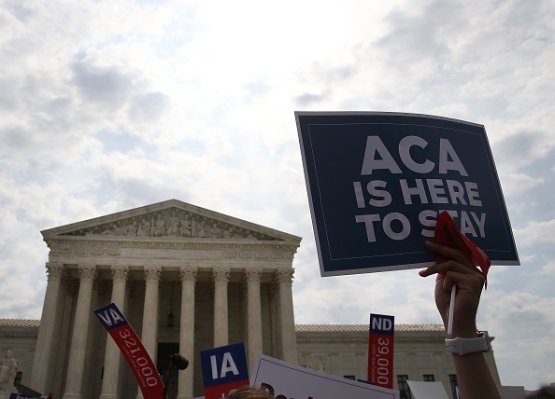 How Democratic Presidential Contenders Reacted to the Obamacare Decision
Next Up: Editor's Pick