Supreme Court Justice Antonin Scalia is known for his colorful language, using phrases like “argle-bargle” and “jiggery-pokery” in his dissents.

But the two harshest words he uses to signal his dissatisfaction with the court’s majority are actually pretty plain: “I dissent.”

Within the cloistered world of the nation’s highest court, it’s the little things that get noticed. Among them is the phrase that a Justice on the losing side of a case chooses to end their dissent with.

Scalia usually chooses to simply end his decision without a sign-off, but in a select few cases he has gone further and added “I dissent” just to underline the point. That’s how he ended his dissent Thursday from the 6-3 majority opinion in King v. Burwell that allowed subsidies on state-based insurance marketplaces set up through the Affordable Care Act to continue.

The court’s two decisions on Obamacare “will publish forever the discouraging truth that the Supreme Court of the United States favors some laws over others, and is prepared to do whatever it takes to uphold and assist its favorites,” he wrote. “I dissent.”

“I don’t know of any systematic studies, but it’s clear to me that the Justices know the difference between the two formulations and make deliberate choices about which to use,” he told TIME in an email.

The cases in which Scalia chooses to end with “I dissent” are interesting.

In 2003, he dissented from the 6-3 majority in Lawrence v. Texas striking down anti-sodomy laws.

“The matters appropriate for this Court’s resolution are only three: Texas’s prohibition of sodomy neither infringes a ‘fundamental right’ (which the Court does not dispute), nor is unsupported by a rational relation to what the Constitution considers a legitimate state interest, nor denies the equal protection of the laws,” he wrote. “I dissent.”

In 2011, he dissented in part from a 5-3 decision in Arizona v. United States that upheld a lower court ruling overturning an Arizona law that denied bail to illegal immigrants charged with some felonies.

“If securing its territory in this fashion is not within the power of Arizona, we should cease referring to it as a sovereign State,” Scalia wrote. “I dissent.”

And in 2012, he used the phrase in a dissent from a 5-4 decision in United States v. Windsor that overturned part of the Defense of Marriage Act which barred federal recognition of same-sex marriages.

“The Court has cheated both sides, robbing the winners of an honest victory, and the losers of the peace that comes from a fair defeat. We owed both of them better,” he wrote. “I dissent.”

Scalia’s liberal colleague, Justice Ruth Bader Ginsburg, recently said in an interview at the American Constitution Society that she stopped writing simply “I dissent” after liberals overreacted to her use of it in the 2000 Bush v. Gore case, even putting it on T-shirts. She now simply notes that she would uphold or overturn the lower court decision.

“I think of my colleagues who have just criticized the court’s opinion as being ‘profoundly misguided’ — that’s one from (former Justice) John Paul Stevens — or from Scalia ‘this opinion is not to be taken seriously’ and then after saying that, then you end it (with ‘I respectfully dissent’ when) you’ve show no respect at all,” she said. 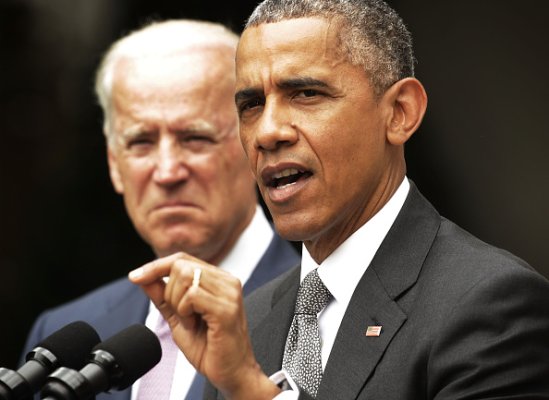 Obama Says More Work to Be Done on Expanding Health Insurance
Next Up: Editor's Pick