It’s been two months since a massive earthquake in Nepal left more than 8,500 people dead, leveled thousands of buildings and homes and triggered a deadly avalanche on Mount Everest. On Sunday, NBC will air “Avalanche,” a special episode of Dateline led by the network’s chief foreign correspondent Richard Engel, featuring eyewitness accounts from one expedition climbing Mount Everest during the quake on April 25. Engel, who reached Nepal with a crew shortly after the earthquake struck, talks with TIME about what he found in the country and what he has taken away.

TIME: At what point did you learn an avalanche had apparently hit Everest Base Camp?

Engel: It was social media, the first pictures taken by witnesses of the avalanche at Base Camp. But it wasn’t a complete picture. We just knew something bad had happened there, but we didn’t know: Were hundreds dead? Were thousands missing? Were people stranded at altitude? Were they going to be freezing to death? Starving? You get stranded at Everest or you get trapped under an avalanche on the highest peak in the world, it’s a strong possibility that there’s no help coming.

I think we were the first television crew up to Base Camp. So after we saw the pictures, we were up there I guess within 48 hours. But we got lucky, too. We got to the lower camp. There happened to be a time when there was good weather. We happened to have a chopper pilot who was willing to go. So we had a pretty fortuitous sequence of events to get us there quickly.

We follow, mostly, the experiences of one expedition, called the Madison Expedition Group, and it’s quite a well known outfitter that takes climbers up to Everest. And they had a very, very tough run. They lost a team member, they had a documentarian with them who was filming. They had a very strong, compelling story. We got to the story early. It’s on Everest, and it’s a story about that team and what happened to Base Camp, but it’s also representative of what this mountain means to Nepal, what this earthquake meant for the people of Nepal. We talk about all the 8,000, maybe 9,000, maybe 10,000 people—it’s still unclear how many people died—how this was a terrible turn of events for an expedition and a terrible turn of events for a country.

TIME: What happened when you arrived to Base Camp?

Engel: Well, I almost collapsed. Not because of what I saw, but because of what I felt. I wasn’t acclimated to the altitude, so I went from Kathmandu, which is at low altitude, to 17,598 feet in an afternoon, and that’s not an ideal way of doing it. The pilot basically told me, if you stay at this Base Camp for longer than an hour or two hours or three hours, you’re going to need medical attention. So I got out of the chopper, and I wasn’t alone—there were three of us: the pilot, myself and a cameraman—and the cameraman and I were dizzy. It was difficult to speak. It felt like my tongue was very thick in my mouth. So we were lucky. We were there for only a brief amount of time and got off and there was no medical problem, but I was struck by the altitude, I would say. That was the most immediate sensation.

TIME: You met a lot of sherpas and climbers and guides. Did you get a sense of how they deal with something like this when it happens?

Engel: For the sherpa people, Everest and that entire section of the Himalayas is sacred. This is a holy place. It is a place where you only approach after receiving the blessings of holy men. They construct altars before they go onto the mountain. So for the sherpa people, the dangers of Everest is something that they always are conscious of, something that they always ask the Gods to grant them safe passage. They clearly bore the brunt of this earthquake. A lot of these stone villages were devastated and they are still recovering from this. But it is also a fact that the sherpas make their livelihood from the Everest climbers and from the business that comes with it. So they respect the mountain, they fear the mountain, but they also live and work on the mountain.

It was the sherpas who decided this year that no more climbers would go up Everest. We saw some climbers who, even after the avalanche, they wanted to keep going. They wanted to push. They’d spent a lot of money, they’d been training, they’d had their sights set on the summit. But it was the sherpas who said this year, “Climbing season is done. We’re not doing this anymore.” So they still very much own the mountain.

Everest has a special place in all of our imaginations. For centuries, Everest was a little bit like the moon. It was the place where everyone wanted to go. Empires wanted to be able to say that they were the first to put a climber on top of Everest. So it has long been part of our collective history. And part of our collective imagination. So when a tragedy happens up on that mountain, I think it has a global resonance. Everybody’s heard of Everest. Everybody knows what Everest is and what it means, and the significance.

TIME: There’s a Swiss helicopter pilot who is central in this Everest story. You credit him with saving dozens of people stranded on the mountain.

Engel: On the morning of the earthquake, there was solid cloud cover and the pilots couldn’t get up there. A few pilots that were nearby couldn’t get up to Base Camp. So, like we knew down below in Kathmandu that something bad had happened, the rescue pilots knew that something bad had happened. They just didn’t know what, and they didn’t know how severe. So this one pilot, a Swiss pilot named Reto Rüesch, who was locked under this cloud cover getting increasingly frustrated, saw a little hole, decided to punch through that hole, get above the clouds and go to Base Camp. He was the only pilot in the sky for many hours, and single-handedly rescued about 70 people. Afterward, we went and saw him in Switzerland.

TIME: And how is he reflecting on what he did that day?

Engel: The most humble guy you’ll ever meet. He told no one back home in Switzerland what he did. He was embarrassed that we even wanted to come and interview him. He said “Sure, I guess, if you want, you can come and talk to me.”

TIME: What will you take away from your time in Nepal?

Engel: I was just amazed at the people. They were so calm and resilient. I didn’t see any looting. I didn’t see any violence. There was no hostility toward us. They were resourceful, and just really astonishingly lovely. I was really impressed … because everyone moved outside. Think about like—an earthquake happens in Manhattan and all the social services are destroyed, all the phones are gone, the Internet’s gone, the banking’s gone, the buildings are damaged, and everyone just on their own moves into Central Park and lives there, without any orders form above. And there’s no fighting, no arguments, they’re just living under tarps in Central Park. It was beautiful, in a way. Tragic, but the way they came together was beautiful.

Read next: Cover Story: ‘This Is the Earthquake We’ve Been Waiting For’ 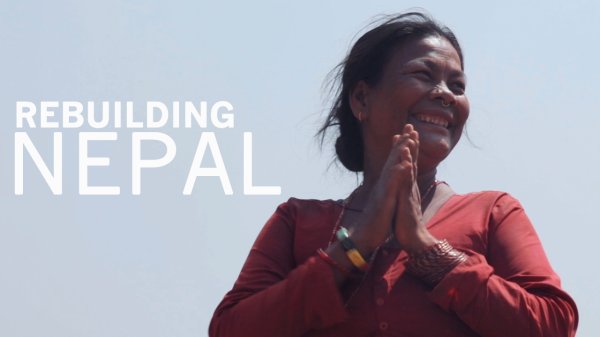 Go Inside the Effort to Rebuild Nepal
Next Up: Editor's Pick