President Obama takes pride all that his Administration has accomplished for the lesbian, gay, bisexual, transgender community. At a reception celebrating Pride Month at the White House on Wednesday, he listed off a series rights and protections the LGBT community has gained under his watch.

“Together, we ended ‘don’t ask, don’t tell.’ We passed a historic hate-crimes bill named in part after Matthew Shepard. We lifted the HIV entry ban, and this summer, we’re going to be updating our national HIV/AIDS strategy, which will focus on eliminating disparities that gay and bisexual men and transgender women face,” Obama said to bouts of raucous applause.

Under his tutelage, Obama said Wednesday, the Violence Against Women Act was expanded to protect LGBT victims and LGBT federal workers have gained protection against employment discrimination. As of Tuesday, he noted, federal workers’ insurance will no longer inhibit gender transitions.

Still the President couldn’t avoid the obvious. As soon as Thursday, the Supreme Court could issue a ruling that either guarantees that same-sex couples have a constitutional right to marriage or sends the state of same-sex marriages in some states into a tizzy. Most are confident that the Supreme Court will rule in favor of marriage equality, given the seismic shift the country has experienced on the issue. Whatever happens, Obama said, there’s no disputing that the social fabric of the country is more tightly woven around the rights of LGBT Americans.

“However the decision comes down on the marriage issue, one thing is undeniable — there has been this incredible shift in attitudes across the country,” he said.

“When I became President, same-sex marriage was legal in only two states. Today, it’s legal in 37 states and the District of Columbia,” he added. “A decade ago, politicians ran against LGBT rights. Today, they’re running towards them.”

Every year in June, Obama takes a moment to celebrate the LGBT community. And at nearly every Pride event, a political debate on issues surrounding the community has cast a shadow over the celebratory vibe. In 2009, Obama called for the repeal of “don’t ask don’t tell,” a charge he reiterated in 2010. From 2009 until 2011, Obama avoided explicitly saying whether or not he was in favor of same-sex marriage while calling for an end of the Defense of Marriage Act. The 2012 reception was the first event at which he formally expressed support for gay marriage. Every year, he’s called for a strengthening of laws that prohibit employment discrimination based on sexuality and gender identity.

And on Wednesday, as he has each year, Obama also acknowledged the work left to be done —i ncluding the long-stalled Employment Non-Discrimination Act.

“There are still battles to wage, more hearts and minds to change. As long as there’s a single child in America that’s afraid they won’t be accepted for who they are, we’ve got more work to do,” Obama said. “But if the people in this room and our friends and allies across the country have proven anything, it’s that even in the toughest of circumstances, against the greatest possible odds, in America, change is possible.” 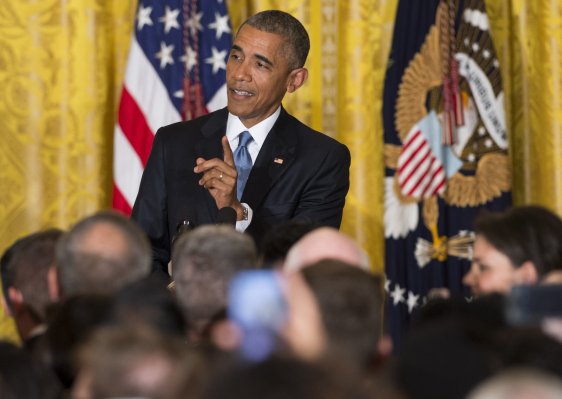