This Is the Safest Place to Sit on a Plane

By TIME Video and Emily Barone

Statistics show that the middle seats in the rear of an aircraft historically have the highest survival rates.

This is based on a study of aircraft accidents in the last 35 years. TIME went through the Federal Aviation Administration’s CSRTG Aircraft Accident Database looking for accidents with both fatalities and survivors. We found 17 with seating charts that could be analyzed. The oldest accident that fit our criteria was in 1985; the most recent was in 2000.

The analysis found that the seats in the back third of the aircraft had a 32% fatality rate, compared with 39% in the middle third and 38% in the front third.

After a crash, survivors who are near an exit are more likely to get out alive, according to a study published in 2008 from the University of Greenwich which looked at emergency exit usage after an accident.

Of course, the chances of dying in an aircraft accident have less to do with where you sit and more to do with the circumstances surrounding the crash. If the tail of the aircraft takes the brunt of the impact, the middle or front passengers may fare better than those in the rear. We found that survival was random in several accidents — those who perished were scattered irregularly between survivors. It’s for this reason that the FAA and other airline safety experts say there is no safest seat on the plane.

But one thing is certain: Flying is very safe, and it’s only gotten safer in recent decades. This is especially true compared with other means of transportation. The lifetime odds of perishing in a car are 1 in 112. As a pedestrian, the odds are 1 in 700 and on a motorbike, they’re 1 in 900. But on a plane? The odds of dying drop to just 1 in 8,000. 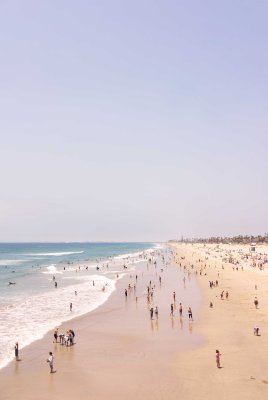 This Is the Best Beach in the U.S.
Next Up: Editor's Pick