How the Declaration of Independence Can Still Change the World

Three weeks ago Britain observed the 800th anniversary of the Magna Carta, the charter of liberties King John was forced to issue to his barons in 1215. Most contemporary commentaries took the opportunity to point out how far short that document fell of modern principles of justice. It benefited only the great nobles, not the common people; it was not, in any case, fully put into effect for a long time; and it contained some provisions, such as those relating to Jews, reflecting medieval prejudices. As the Fourth of July rolls around once again, some commentators will undoubtedly make similar points about the Declaration of Independence. Yes, the Declaration declared that “all men are created equal,” but it thereby left the female half of humanity out of account. It said nothing about slavery, which then existed in every colony and obviously contradicted its principles. It referred to “merciless Indian savages” whom the King had incited against the colonists. In short, the authors and signatories of the Declaration did not use the language that is fashionable in the 21st century, and thus it is a relic from another time that is irrelevant to our world today.

That view misses two very important points. Earlier generations have revered both Magna Carta and the Declaration because they were critical milestones in the development of modern ideas of liberty and government—milestones that can only be understood in the context of their own times, not according to 21st-century views. More importantly, the authors of the Declaration used universal language which has inevitably led to the extension of the rights and freedoms they championed to more and more of humanity. That language is why the Declaration of Independence still has the power to inspire progress.

Because we have taken the principles of the declaration for granted for so long, we must remind ourselves of how revolutionary they were in 1776. It was “necessary,” Thomas Jefferson and the others wrote, “to dissolve the political bonds” which had connected the Americans and the British, because the royal government no longer met the standards for just and effective government that they themselves were defining. The colonists were acting, they wrote, in the face of “a long train of abuses and usurpations,” acts by the King that in their opinion violated the long-standing principles of British law that had developed over the centuries, and especially since the Glorious Revolution of 1688, during which parliamentary control over the Throne was solidified. The King had refused to allow colonial governments to function properly. He had sent troops to the United States to enforce his will, and quartered those troops among the population. He had tried to deprive large numbers of people the right to elect legislators, and much more. But his government—like all governments—did not exercise power by divine right, only insofar as it respected established principles and traditions of liberty. That idea was shortly to set not only the colonies, but much of the western world, aflame.

In its most famous passage, the declaration asserted the ultimate authority of human reason. “We hold these truths to be self-evident,” it said: “that all men are created equal, that they are endowed by their Creator with certain unalienable Rights, that among these are Life, Liberty and the pursuit of Happiness.–That to secure these rights, Governments are instituted among Men, deriving their just powers from the consent of the governed, –That whenever any Form of Government becomes destructive of these ends, it is the Right of the People to alter or to abolish it, and to institute new Government, laying its foundation on such principles and organizing its powers in such form, as to them shall seem most likely to effect their Safety and Happiness.” Yes, it is true that the colonies had not, and for many years would not, extend all those rights to poorer men, or indentured servants, or slaves—but their language made no exception for any of those categories. Thus, the Declaration established a contradiction between their principles and existing conditions in the 18th-century world. That contradiction was bound to lead to further political struggles. So, although the Founding Fathers referred to “all men”—the Constitution, written 20 years later, generally referred more broadly to “persons”—it was equally inevitable that women would clam their rights as well, and that the logic of the founders’ language would allow that progress, too.

No one understood this better than Jefferson himself. Fifty years later, in the spring of 1826, he was invited, along with the few other surviving signatories, to attend a celebration of the signing in Washington. He began his reply by regretting that illness would not permit him to attend. (Indeed, his remaining ambition was simply to survive until July 4, which is exactly what he and his fellow signatory John Adams managed to do.) Yet he proclaimed the enduring significance of the declaration he had drafted:

And so it was, through most of the rest of the 19th and 20th centuries, on every continent.

The struggle for these principles, however, has proven to be an enduring one. In much of the world reason is once again fighting with superstition, and finds itself in retreat. In our own nation, inequality threatens to create a new aristocracy that will ride upon the backs of the masses. The principles and language of the declaration remain by far the best defense against oppression and superstition. Most importantly of all, it is only upon the basis of impartial principles that new coalitions for justice can form. The Declaration of Independence remains a precious part of our heritage—one which we simply cannot do without. 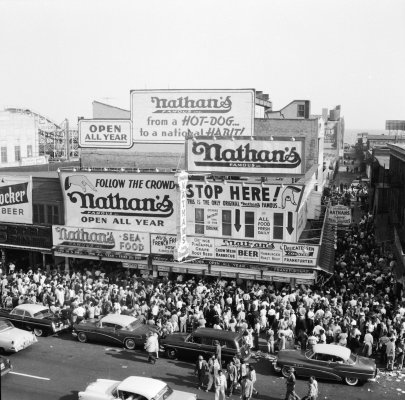 This Graphic Shows How Many Hot Dogs It Takes to Win the Nathan's Eating Contest
Next Up: Editor's Pick