State workers take down a Confederate national flag on the grounds of the state Capitol, June 24, 2015, in Montgomery, Ala.
Martin Swant—AP
By Nolan Feeney

Alabama Governor Robert Bentley has ordered that the Confederate flags on the state Capitol’s grounds be taken down.

Bentley made the order Wednesday morning as calls to remove the flag from government buildings and stores mount following the Charleston, S.C. shooting at a black church last week, the Associated Press reports.

“The Governor ordered flags removed from the Capitol this morning,” his office said in a statement to TIME. “He does not want the flags to be a distraction from other state issues so he ordered them removed.”
The statement echoes what Bentley told AL.com as he was leaving the Capitol on the way to an event Wednesday.

“This is the right thing to do,” he said. “We are facing some major issues in this state regarding the budget and other matters that we need to deal with. This had the potential to become a major distraction as we go forward. I have taxes to raise, we have work to do. And it was my decision that the flag needed to come down.”

Bentley said he checked to see if there were any state laws preventing the removal of the flag and found none. Workers also removed three other Civil War-era Confederate flags from the Confederate memorial on the Capitol grounds, AL.com reports.

Other governors have distanced themselves from the flag since the shooting. South Carolina Governor Nikki Haley called for the removal of the Confederate flag from the state Capitol grounds on Monday, while Arkanasas Governor Asa Hutchinson commended the decision from Wal-Mart, one of Arkansas’ largest employers, to stop selling Confederate flag merchandise. 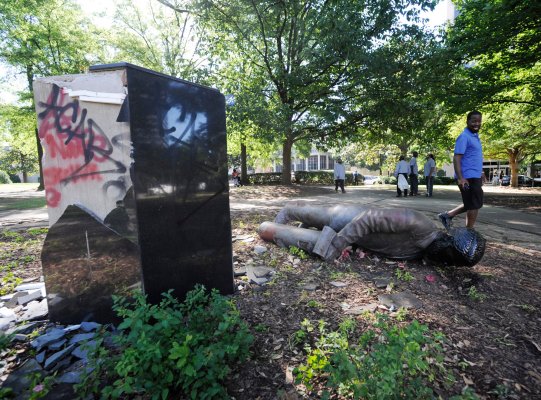