By Nolan Feeney and Salima Koroma

Walk the Moon’s infectious hit single “Shut Up and Dance” is finally getting its due. Months after it was first released, the song has cracked the Top 10 on Billboard’s Hot 100 and garnered serious buzz as a possible song of the summer—a title a rock band hasn’t taken since the days of Smash Mouth.

Not that the band minds having a sleeper hit on their hands: “I think the slower the rise, the better for us,” singer-keyboardist Nicholas Petricca tells TIME. “It’s pretty much doing everything we could possibly have hoped. If we made a list of all the things that we would like this song to do, it’s just knocking them down. It’s really surreal to be living that life right now.”

In addition to endorsements from Ed Sheeran (who counts himself as a fan) and Apple (the band played its Worldwide Developers Conference Bash in June), “Shut Up and Dance” is even getting love from Wyclef Jean, who is gracing the song with his rapping skills on an upcoming remix. “He loves weird rock’n’roll,” Petricca says. “He was introduced to some of our demos by a friend of a friend when we were making the record, and he wanted to meet up and hang out.”

TIME sat down with Walk the Moon to talk about the rise of “Shut Up and Dance,” their new single “Different Colors” and what makes a good song of the summer.

On the song’s real-life inspirations: “We were out [in Los Angeles] writing for Talking Is Hard, and I hit this roadblock with the song that would eventually be ‘Shut Up and Dance,’” Petricca says. “We didn’t have the chorus. So to take a break and blow off some steam, I went out with some friends to this funky soul dance party they have at this club called the Echo. And there was a girl there with a backless dress and beat-up red sneakers, and she actually told me to shut up and dance with her. So I did—and then came home and wrote the chorus.”

On why the song is resonating this time of year: “The song has this message that can resonate with anyone—get out of your head and live in the moment,” Petricca says. “I have moments where I can’t focus or don’t feel like I’m present. The song is about getting over that, embracing whatever it is you’re too afraid to show. Get out there and wave your freak flag.”

On how it differs from their new single: “‘Shut Up and Dance’ carried our torch of peppy indie rock from the last record, but we’re really stoked about ‘Different Colors’ because we feel that it shows a different side of us that’s equally important,” Petricca says. “That’s about taking this platform, this big megaphone that we’ve got as we get more popular to say something that’s meaningful to us. ‘Different Colors’ is all about not just tolerating each other’s differences but celebrating them and embracing them.”

On the deal with the face paint: “It just spiraled into this tradition,” Petricca says of fans who paint their faces before Walk the Moon concerts, something they picked up from the band’s video for “Anna Sun.” “We’ve heard time and time again that people make friends out there because they don’t have face paint, so they’ve got to meet the person [next to them]. For us, it’s just a fun expression of that inner child.”

The band has gotten smarter about their choice of materials, though. “In the early days of the face paint we used stuff that wasn’t necessarily face paint, and that was pretty gross,” says bassist Kevin Ray. Adds Petricca: “It really burned a bit.”

For more on what makes a song the song of the summer, check out TIME’s annual Answers Issue, on newsstands this Friday. 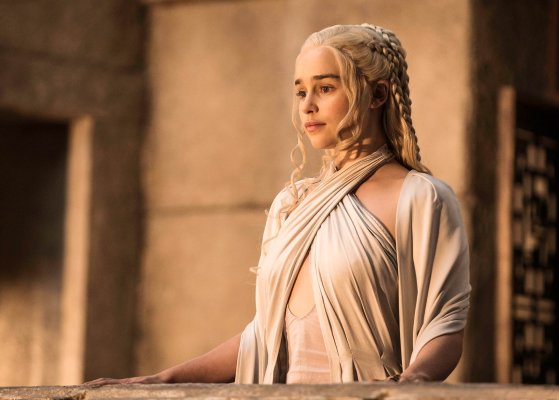 Did a Leaked Tape Feature Dialogue From GoT Season 6?
Next Up: Editor's Pick