For the past eight years, Melanie, whose name has been changed to protect her privacy, shared her Chandler, Ariz. home with several roommates. But when she finally got the place to herself this past spring, she felt her newfound privacy came at the cost of security. So, she decided buy a Canary all-in-one home security device, placing it in the bedroom of her 2,000-square-foot house.

“You don’t think you’re actually going to use it for home security,” says the 43-year-old. “I called it my puppy cam.”

You can indeed see Melanie’s dogs in a video her Canary recorded on May 4. But the device captured something else, too. On that day, a man later identified by police as Brian Pantoja appears to break Melanie’s window, climb inside her home, and rifle through her belongings. According to local news reports, thousands of dollars worth of jewelry went missing from Melanie’s home that day; the investigation remains open as of May. But before apparently pilfering Melanie’s home, Pantoja appears to grab a bottle of water from right in front of the camera that was recording him.

Here’s the footage from Melanie’s Canary, provided by the company and posted here with Melanie’s permission:

In fairness to the burglar, coming in black, white, or silver and about the size of a large soup can, the Canary looks nothing like most webcams. With air vents at the top and no obvious camera lens, it’s not the kind of device you’d expect to find standing vigil over a home. And Pantoja was hardly the first person to be busted by one. Since the device launched in late March, it has caught at least 30 serious incidents on video, the company claims, from alleged burglaries to caretaker abuse and arson.

Other than Canary’s discrete appearance, its 1080p HD camera with a 147-degree viewing angle is the killer feature. Besting the specs of the newly-announced and much ballyhooed Nest Cam, Canary’s video feed looks great on its mobile app, and that was key in solving Melanie’s burglary. Amidst a roomful of police officers, she pulled up the video and zoomed in on the burglar’s face. The authorities recognized him immediately.

“Everybody was just saying they’ve never seen a video that was such good quality,” she says.

Able to detect motion, light, temperature, and humidity, the $249 Canary is more than just a camera. Through the app, Canary can notify users of movement, loud sounds, and changes in air quality when they’re away from home. A built-in microphone lets users talk to the room when they’re away, and an embedded 90-plus decibel siren can scare off intruders at the push of a button.

But as useful as all this sounds, the Canary isn’t for everyone. Digital privacy has become an increasing concern, and gadget makers face an uphill battle in convincing people their private moments are safe from peering eyes online. Melanie never disclosed any trepidation about having a web-connected camera in her bedroom, but my wife shooed my review unit out of our living room like it was one of the neighbor’s cats.

In my wife’s defense — and she is employed as a crime prevention expert — I promised her I would never review a webcam in our home without her permission. But as I set it up in my office instead, she reminded me of an excellent point: devices like Canary will not prevent crimes from occurring. In fact, once a person has broken into your house, that’s already breaking and entering. But, as the Chandler Police Department might attest, it’s clear that cameras like these can help catch the bad guys after the deed is done.

Once I installed the Canary, I also started thinking of it as my puppy cam, watching as my dog pace back and forth while I was out running errands. Though it was nice to know she doesn’t get nervous in my absence, I discovered the Canary itself was on high alert. Via the Canary app and your phone’s GPS, the device knows when you’re home and when you’re away, automatically arming itself when you step out. This is good because you won’t get overwhelmed with sound and motion notifications when you’re walking around your house. That’s also a very robust way of arming the device — by tracking the owner’s (or owners’, as multiple phone-toting users can be detected) location, Canary doesn’t rely on a spotty Bluetooth or Wi-Fi connection with your smartphone to know that you’re home.

But personally, I found this feature a little creepy, as it kept tracking me even after I unplugged the camera. That’s has more to do with how geo-location works than with the Canary itself, but most smartphone users don’t understand that when you allow an app to track your location, it will do that until you tell it to stop.

Still, there’s no way my paranoia would sway Melanie and the dozens of other users who have found the Canary and similar devices to be tremendously helpful home security tools. In her case, even if the culprit hadn’t been caught, she’d find some sort of relief by seeing the crime in action. 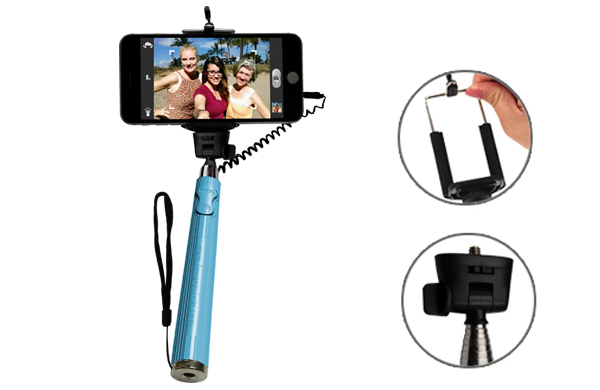 This Is the Best Selfie Stick for Your Smartphone
Next Up: Editor's Pick