A view of Jerry's apartment from Seinfeld, at Seinfeld: The Apartment in New York City on June 23, 2015
Monica Schipper—Hulu/Getty Images
By Hilary Lewis / The Hollywood Reporter

The fictional Upper West Side apartment where Jerry Seinfeld’s TV counterpart lived for Seinfeld‘s nine seasons and which served as the site of so many conversations about nothing is now the centerpiece of a pop-up Seinfeld exhibit in New York’s Meatpacking District.

The Milk Studios space, which is open to the public for five days, starting Wednesday, the same day Seinfeld starts streaming on Hulu, features a re-creation of Jerry’s 5A one-bedroom apartment and an exhibit of Seinfeld‘s famous props and set pieces. The gallery space also includes Seinfeld scripts and some of the real Seinfeld’s keepsakes from filming the show.

Fans enter the exhibit through a hallway of famous Seinfeld quotes and can take a left to stop by Jerry’s to dissect the day’s minutia. Although you can’t visit Kramer’s apartment, you can recreate George’s risque photo shoot, which Kramer directed, at the opposite end of the gallery.

And you can peek through Kramer’s reverse peephole, where you’ll see just what Silvio saw. There’s also a suspicious red light emanating from underneath Kramer’s door.

Once you get to Jerry’s apartment, you can barge through the door like Kramer (or more casually enter, a la George or Elaine) or just hold the door open from inside and glare at your neighbor and say, “Hello, Newman.”

Jerry’s place has been painstakingly recreated to look just the way it did during season 8 of the popular series. The turquoise couch and chair are there along with the bike hanging up against the back wall, the round table and Jerry’s desk and, now vintage, computer.

The re-created set faces an audience of New Yorkers (large windows look out onto the street).

Jerry’s kitchen also looks just as it did on the small screen, with its blue stools and shelves full of cereal and snacks, if you want to continue your Kramer role play and take some food. There’s even real fruit (four bananas, two oranges, an apple and a pear — but no Mackinaw peaches) in the bowl on Jerry’s counter.

The apartment also features plenty of hidden references to show storylines including a photo of former New York Mets player (and Seinfeld guest star) Keith Hernandez, copies of the Tropic of Cancer and Tropic of Capricorn and a Big Willie Style CD, which Jerry no doubt played to “get jiggy with it.” The real Seinfeld also gave the exhibit the same photo of his dad that he had on set, which was copied and placed in the model apartment.

If you exit the apartment through where Jerry’s bedroom would be (sadly not re-created), you’ll see a wall of scribbled notes on brick wallpaper with the Seinfeld logo in the middle. The real Seinfeld lent the exhibit this artifact from the final show of the NBC sitcom, and it was signed by famous guest stars like Kathy Griffin (“F— You, Jerry Seinfeld”) and Bryan Cranston (who identified himself as both “Tim Watley, DDS” and “the re-gifter,” in reference to one of his memorable episodes).

As you continue right, there’s a gallery of Seinfeld props and set pieces, anchored by the Costanza photo shoot set up in the far right corner. Among the items on display are the actual booths and table from the diner scenes, which were in storage; George’s beloved Frogger videogame; the Pez dispenser, the Superman figurine from Jerry’s apartment (the one in the re-created apartment is a replica); the New Jersey Devils jersey David Puddy wore in the “Face Painter” episode; a Bachman pretzels container and a newsstand with scripts and TV Guides featuring the cast. Each item is accompanied by a video showing the appropriate scenes.

The gallery also features replicas of show props like the Festivus pole, the Fusilli Jerry, the maestro’s wand and the “re-touched” beach photo belonging to George’s boss Mr. Kruger.

Next to the replicas is a re-creation of The Last Supper, featuring Seinfeld‘s creative team and lots of boxes of cereal. This painting was also in the real Jerry Seinfeld’s collection.

Puddy himself, Patrick Warburton, was even on hand to check out the exhibit and pose for photos with fans.

Warburton says he still gets recognized for his Seinfeld character, something that might only increase as the show starts streaming.

“As long as I somewhat resemble David Puddy…people will probably say something because the show always seems to be around somewhere,” Warburton said.

As for the re-creation of Jerry’s apartment, Warburton joked, “Initially when I walked in there, it broke me emotionally, I fell to the floor in tears…” before adding “it’s just fun.” 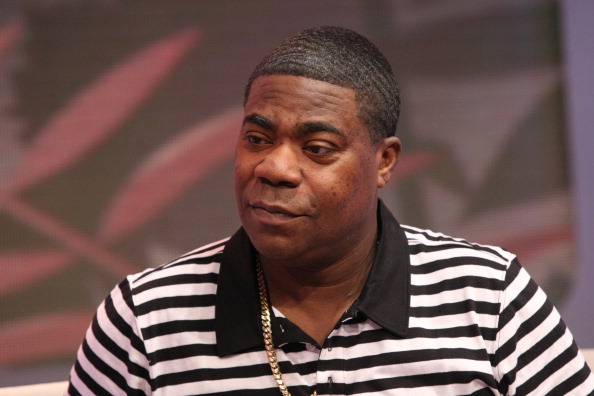 Tracy Morgan to Get Star on Hollywood Walk of Fame
Next Up: Editor's Pick