J.K. Rowling resurrected her legions of Harry Potter fans last year when she posted a new story about what Potter and the rest of Dumbledore’s Army were up to in their 30s. Since then, she posted a story last Halloween and bits of information throughout Christmas.

On Tuesday, fans were pleased to find some new information pegged to the release of the Deathly Hallows chapters on the site. They could find insight on the Dursleys, The Sword of Gryffindor and Hatstalls (those whose sorting took more than five minutes because the Sorting Hat found them equipped for different Hogwarts houses). The bulk of new information comes in the forms of “Alchemy” and “Extension Charms.”

In the latter, Rowling explains that this charm, which Hermione used to enhance the small handbag she carried in Deathly Hallows, was unlawfully used by Hermione: “As the latter played no insignificant part in the defeat of the greatest Dark wizard of all time, no charges have been brought” by the Ministry of Magic.

In “Alchemy,” Rowling explains “the search for the Philosopher’s Stone, which would turn base metal into gold and give the possessor eternal youth,” and provides some background on the relevance of alchemy in the Potter series. “The colours red and white are mentioned many times in old texts on alchemy,” she writes, explaining that some interpret that these colors symbolize base metal and gold, representing “two different sides of human nature.”

These colors inspired the names of two relevant characters in the Potter series: “Rubeus (red) Hagrid and Albus (white) Dumbledore…both hugely important to Harry,” Rowling writes. “Seem to me to represent two sides of the ideal father figure he seeks; the former is warm, practical and wild, the latter impressive, intellectual, and somewhat detached.”

Rowling also notes that Hermione never took advantage of the opportunity to research alchemy in the Hogwarts library. “Perhaps she feels (as Harry and Ron certainly do) that, far from wishing to make another Philosopher’s Stone, they would be happy never to se another one in their lives.”

Pottermore users can click around the Deathly Hallows chapters to find new information, unlock it and read it themselves. A couple hints: Take a look at “Splinched” and “Dragon Flight.” 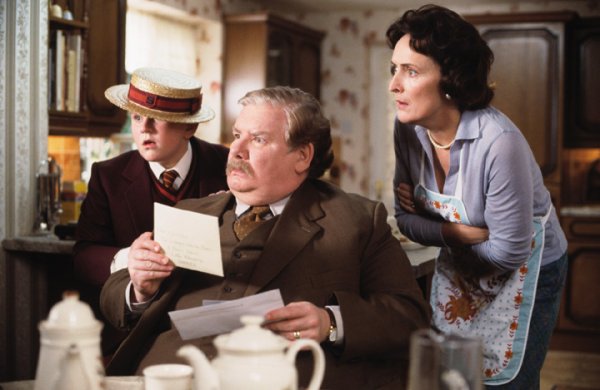