The moons Titan, Mimas, and Rhea, captured by Cassini in this image released on June 22, 2015.
NASA/JPL-Caltech/Space Science Institute
By Olivier Laurent and TIME Photo

On Earth, we’re used to seeing a crescent moon—so much so that we barely pay attention to it. But imagine seeing three crescent moons at the same time. This is what NASA’s Cassini spacecraft captured on March 25, 2015.

The rare image shows three of Saturn’s 62 moons: Titan (the largest moon in this photograph), Rhea and Mimas. While Titan appears fuzzy because of its cloud layer, Rhea clearly shows its rough, heavily cratered surface. “And a close inspection of Mimas (center bottom), though difficult to see at this scale, shows surface irregularities due to its own violent history,” says the team at the Cassini Imaging Central Laboratory for Operations, which released the image on Monday.

The Cassini spacecraft first arrived near Saturn in 2004 and is now on its second mission extension, dubbed the Cassini Solstice Mission, which will end in 2017. 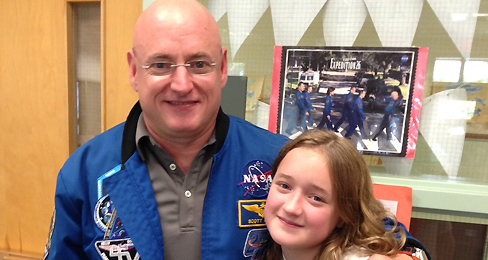 Thinking of My Dad in Outer Space
Next Up: Editor's Pick