Review: Humans is a Robot Chiller for the Smartphone Era

Pop-culture robots come in a couple different models. There’s the Helper–the Wall*Es and R2-D2s who exist to serve. And there’s the Enemy–the malevolent, sentient killing machines like the Cylons and the Terminator. What distinguishes AMC’s Humans (premieres June 28) is that we don’t quite know whether its robots are the first kind or the second.

In the alternative present-day of Britain of Humans (a co-production with the UK’s Channel 4 and Kudos), the latest must-have gadgets are “synths,” synthetic humans exactly like us except they have metallic irises and are far hotter. We first encounter a group of them warehoused in a storage room, standing, inert and naked except for briefs (a concession more to the universe of basic cable than their own, it seems). There’s not an Apple logo to be seen on their flawless, multiethnic forms, but like the iPhone, synths have become ubiquitous in a few short years after their invention, in the workplace, medicine, and the home.

Home is where Anita (Gemma Chan) is headed, when harried family man Joe Hawkins (Tom Goodman-Hill) picks her up, in a transaction more reminiscent of buying an upscale used car than Uncle Owen haggling with the Jawas–she’s a bargain, slightly used, with a 30-day return policy. (“What if she’s not pretty?” asks his youngest daughter Sophie [Pixie Davies]. “Can we change her if she’s not pretty?”) A tap under the chin, and she comes to life with a sound not unlike a Macbook booting up.

Anita’s meant to be a surprise–Joe and his wife Laura (Katherine Parkinson) work and have three kids to manage–but in the manner of these stories, not an entirely pleasant one. Laura, returning from a business trip, is upset that Joe went behind her back and feels the purchase implicates her as a “shit mother.” (As in our universe, labor-saving tech comes with implicit judgment of working women pre-installed.) Teen daughter Mattie (Lucy Carless) is tech-savvy but sees synths as stealing her future; why train to be a doctor, or anything else, when a few OS upgrades from now machines will do the work far better? Sophie loves Anita too well–she’s protective, friendly, always available to read a story–but doesn’t understand the distinction between synth and human. And teen son Toby (Theo Stevenson) becomes attached to her–well, precisely the way you’d expect a teen boy would.

The Hawkinses, like everyone else in this fictional world, have been handed life-changing technology with a few simple setup instructions, but no emotional or social manual. How much is appropriate to ask of a machine that is, from all outward appearances, essentially a human slave? What are your obligations to it? (Is it an it, or a she, or a he?) Do you treat a synth more like a member of the family or a Roomba? Chan’s performance–composed, warm-ish, but just mechanical enough to be uncanny–goes a long way toward heightening the conflict. (The creepiest scene in the pilot comes when the family explains a joke to Anita and she laughs–and laughs, and laughs, until she’s commanded to stop.)

Like the dystopian British anthology Black Mirror, Humans is a sci-fi premise smartly reimagined for our own age of tech outsourcing. The synths combine our reliance on devices with the app-enabled cheapening of service labor: they are Amazon drones and Über (yes, they can drive) cheerfully embodied.

It’s not entirely a reimagining, though; the themes of hubris, morality and human obsolescence are cobbled together from the Asimovian stock parts of robot stories past. Humans struggles with a problem of much dystopian sci-fi: it asks the audience to accept that the fictional world has embraced this technology as a panacea, even as nearly every character has a foreboding sense that it’s a terrible mistake.

And indeed, there is synth-trouble big and small outside the Hawkins house. A melancholy subplot follows Dr. George Millican (William Hurt), a scientist from the original synth project who’s in the early stages of dementia, desperately trying to keep his ancient outmoded home-health-aide synth running because it retains memories of his late wife. The larger arc, meanwhile, concerns a small band of synths–to whom Anita is apparently connected–who have become sentient, and a network of humans hunting them, in fear that this will lead to the Singularity: self-aware machines begin replicating and perfecting themselves, and it’s goodbye Rosie the Robot, hello Skynet.

Intriguingly, though, Humans is not clear whether these smart robots are a threat at all, at least in the two episodes screened for critics. For the series’ real concerns, read the title: it’s us, the end users, and how access to artificial, programmable humanity, stripped of even the nominal obligations society shows to minimum-wage workers, can enable our worst tendencies. The synths are characterized less in terms of what they might do than how they reflect problems we already have, be it loneliness, sexual predation (of course there are synth whorehouses), anxieties about gender and spousal roles. They’re problematic in the way that the technology we already have is; they’re just more efficient at it.

Humans’ programming runs toward melodrama at times, especially in Hurt’s subplot, but it’s mostly restrained and chilling. It doesn’t threaten and scare but hums enigmatically in power-saving mode. The human characters too are effectively grounded. Laura’s worry about being replaced is more immediately sympathetic. (When she insists on reading Sophie a story instead of Anita, her daughter protests, “But she doesn’t rush!” Ouch.) But Joe isn’t cast as a Stepford husband so much as a bit naive and at the end of his rope. The Hawkinses have entirely human problems that predate Anita–Laura has been increasingly, mysteriously absent–and he bought the machine, he says, “To give us time.”

In a way, after all, the most far-fetched aspect of Humans’ premise is not so much that people would invent robo-humans but that consumers would pay so much money for their labor, aid and companionship when we already have Taskrabbit, Grubhub and Tinder a finger-swipe away. (A scene of synths picking fruit in a greenhouse raises the cynical but inevitable question of whether they’re more cost-effective than exploited farm workers.) This sci-fi tale for the modern service economy purports to ask how dangerous it would be if apps took human form. But just as much, it’s asking us to reflect on a world in which we’ve made humans into apps. 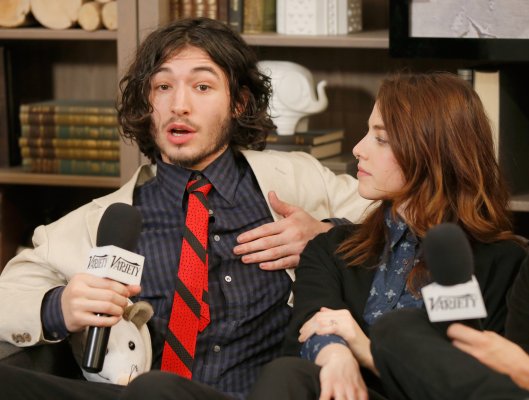