Inside the White Supremacist Group that Influenced Charleston Shooting Suspect

Dylann Storm Roof appears by closed-circuit televison at his bond hearing in Charleston, S.C. on June 19, 2015
Reuters
By Josh Sanburn

In 2012, the Council of Conservative Citizens started seeing a spike in traffic to its website. George Zimmerman was on trial for killing Trayvon Martin, an unarmed black teenager, after a confrontation in their Florida subdivision, and white supremacy organizations like the CCC had become vocal online defenders of Zimmerman’s innocence. Postings on the high-profile case attracted new visitors, and some of the curious became converts.

“When George Zimmerman was acquitted, white nationalists in the U.S. considered that to be a win for them,” says Stephen Piggott, who tracks white supremacist groups for the Southern Poverty Law Center. “The Council of Conservative Citizens’ website blew up. More people were going to the site, and Dylann Roof was one of those people.”

Since the Zimmerman trial, the CCC has been squarely focused on what it calls an epidemic of black-on-white crime. And when Roof Googled that phrase, he found the group’s website.

“I have never been the same since that day,” Roof wrote in a purported manifesto found online in the days after he opened fire at the Emanuel A.M.E. Church in Charleston, S.C. and killed nine people. “There were pages upon pages of these brutal black on White murders. I was in disbelief. At this moment I realized that something was very wrong.”

That moment apparently sent Roof on the road that ended in the massacre at the historic black church.

For years, CCC was one of the most prominent white supremacist organizations in the U.S. Today, however, the group exists primarily online. CCC started in the 1950s in Mississippi as the Citizens’ Councils of America (also known as White Citizens’ Councils), which formed to fight against the integration of public schools following the Brown v. Board of Education ruling.

The group’s influence dwindled as legal segregation was largely eliminated. In an effort to broaden its appeal, the group changed its name to Council of Conservative Citizens in 1985, according to Piggott. The messaging shifted, too. The group talked less about maintaining overt segregation and more about fighting interracial marriage and halting immigration.

On Monday, the Guardian reported that CCC president Earl Holt III gave thousands of dollars to three current Republican presidential candidates. Senator Ted Cruz said that he would be returning the donations. Senator Rand Paul and former Senator Rick Santorum have not commented on the donations, according to the New York Times.

Today, the CCC holds few events but appears to have a small but dedicated following online. While the SPLC estimates its members at less than 1,000, the CCC says it’s “in the thousands.”

“Every other group in the United States has organizations and publications,” says Jared Taylor, a CCC member and spokesman. “We believe whites also have that right. This is considered normal and encouraged with every group except whites.”

Taylor says that CCC members had never heard of Roof and that he never attended a meeting. The group has condemned the shooting, but they stand behind Roof’s ideology.

“For a young man like Dylann Roof to be constantly reminded of the sins of his ancestors, that’s going to make people hopping mad,” Taylor says. “Many people are angry about the genuine facts of interracial crime in the United States, but that anger should not by any means be channeled into violence.”

The group is particularly focused on crime perpetrated by African-Americans against white people. A CCC blog post from January said there were 361 black-on-white murders in 2014.

But according to the most recent numbers by the FBI, a majority of homicides are committed by whites against whites. In 2013, the FBI found that of the 3,005 white individuals murdered that year, 2,509 of the offenders were white and 409 were black.

The deadly shooting comes at a time of upheaval for the CCC. Gordon Baum, the president who helped the organization transition from the White Citizens Councils in the 1980s while maintaining much of its membership, died in March. Earl Holt, a longtime member, took over in May. Kyle Rogers, the CCC’s webmaster and one of its younger leaders, deleted his Twitter account after the attack. The SPLC says Rogers, who had 40,000 followers, was key to the group’s online resurgence. But CCC may see a resurgence of interest after being named in Roof’s manifesto.

“There certainly could be a boost in their membership,” Piggott says. “Their name is getting out there more than it was. You’ll have people defending them who will potentially want to help out and join.” 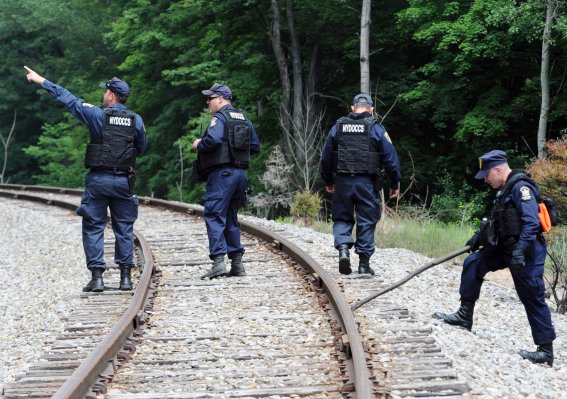 DNA From Escaped Prisoners Found at Burglarized Cabin
Next Up: Editor's Pick