If President Obama Can Say It, You Can Too

US President Barack Obama address the US Conference of Mayors during their annual meeting in San Francisco on June 19, 2015.
Mandel Ngan—AFP/Getty Images
Ideas
By John McWhorter

In many traditional cultures of Australia, it used to be taboo to use normal language with your mother-in-law. Instead, you had to use a whole set of different words and even grammar rules with her. She had to talk that way to you, too.

That’s the kind of thing we learn about in anthropology classes. But we reveal ourselves as more like those tribal people than we suppose in the way we police language such as the N-word. A perfect example is that we even bat an eye when President Barack Obama says to Marc Maron that racism is “not just a matter of it not being polite to say nigger in public” in an interview released Monday.

The issue isn’t whether Obama called someone the N-word. It has for decades been Civility 101 in American society that one does not do that without severe sanction. Where things have gotten complicated is the idea that it is equally sinful to even use the word at all. People have had a hard time wrapping their heads around the fact that referring to the word is not the same as using it.

At the University of Virginia in 2003, a medical-center employee said having a football team called the Redskins is as “derogatory to Indians as having a team called Niggers would be to blacks.” This sparked a protest by the black staff, with her union head suggesting she be fired. When civil-liberties advocate Wendy Kaminer used the N-word to criticize it in a panel discussion at Smith College last fall, she was roasted for committing an “explicit act of racial violence.”

According to the rules of our taboo, black people are allowed to use the word (including with one another to mean “buddy,” a complex matter in itself) because we have been the ones subjected to its abusive usage. Yet, it seems almost as awkward when the president, a black person, uses the word in that way as when a white one does.

Is that because using the word even to refer to it should be considered beneath the dignity of anyone regardless of color? I suspect that analysis misses something. To many, hearing blacks use the N-word, even to refer to it, is awkward because of how arbitrary it seems that whites are tarred as racists when they, too, are simply referring to it.

For example, I myself occasionally use the actual word in just the way that Obama did in my classes, when a societal issue comes up and I want the rhetorical clarity of the word itself rather than a coy euphemism. Occasionally one of my more vocal white students has jokingly commented “See, you can say it!” The comment carries an implication (which he would never venture out loud) that it seems a little arbitrary that I am allowed to say it just because I’m black. I just say “Yep!” and we all laugh a little and move on. But we know it feels arbitrary, not quite fully thought out, that they aren’t allowed to use the word even to refer to it.

There is also the unfortunate term “Niggeritis” that refers to someone being tired after eating a lot of food. I learned of it from a white guy who couldn’t bear to utter the actual word and instead described it and let me figure it out. “Oh, just say the damned word!” I was thinking—and he should have been able to. I felt like we were Australian tribespeople drinking Sauvignon Blanc.

Obama should not have to say “the N-word” when referring to the word, and I’m glad he didn’t. Whites shouldn’t have to either, if you ask me. I am now old enough to remember when the euphemism had yet to catch on. In a thoroughly enlightened 1990s journalistic culture, one could still say the whole word when talking about it. The very first media interview I ever did, a local one on the history of what I would now have to call “the N-word,” would now sound like a period piece simply because it was still OK for me to utter the word I was referring to.

What have we gained since then in barring people from ever uttering the word even to discuss it—other than a fake, ticklish nicety that seems almost designed to create misunderstandings? 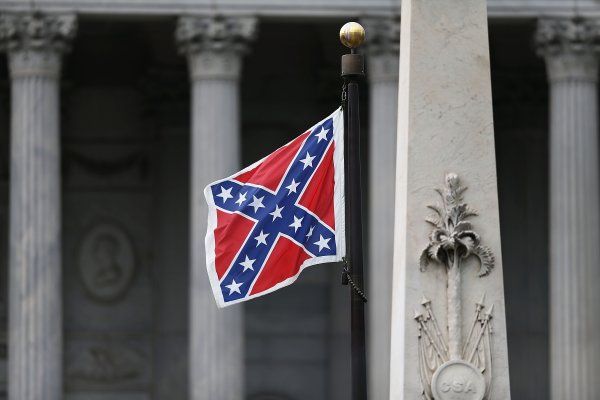 Walmart Will No Longer Sell Products With the Confederate Flag
Next Up: Editor's Pick