5 Things You May Not Know About Jonas Salk

When on April 12, 1955, the public learned that Jonas Salk’s vaccine could prevent polio, celebration erupted worldwide, and Salk became an international hero overnight. As I began my research for his biography, attempting to understand the man behind the image, I was surprised by what I found.

1. This international idol, whose smile shone from newspapers and magazines, did not live “happily every after.” Salk’s life changed forever when the polio vaccine’s success was announced on April 12, 1955. While the public rushed to honor him, rebuke from the scientific community cast a shadow over his achievement. Why the aspersions? This young researcher, not yet a member of the scientific brotherhood, had made and initially tested the polio vaccine in secret while challenging one of their firmly held principles—that only a vaccine made of live virus could impart lifelong immunity. They accused Salk of failing to give proper credit to other researchers. Because he reached out to the public in ways scientists had never done, many accused him of crossing the line of academic decorum by soliciting media attention. And with the vaccine’s success came a wave of celebrity accorded few scientists in the history of medicine. Basil O’Connor, director of the National Foundation for Infantile Paralysis remarked that the scientific community acted as if Salk had committed a felony.

2. The burden of being a world icon hung like an albatross around Salk’s neck. Within a month following the news that polio could be prevented, he (or the University of Pittsburgh on his behalf) received ten thousand letters, telegrams, and phone calls. Salk couldn’t enter a restaurant or hotel without causing a stir like a movie star; people wanted to shake his hand, embrace him, thank him. For years his named appeared on lists of the world’s most revered people along with Churchill and Gandhi. At the same time, he experienced the dark side of fame; there were con artists, stalkers, and the emotional toll on his family was enormous. Suffering under fame’s heavy load, Salk confessed to his longtime secretary he wished this had never happened to him.

3. Longing for refuge, Salk dreamed of creating a utopian institute where scientists and humanists would work side by side, imbuing the sciences with the conscience of man. With funds from the National Foundation/March of Dimes, Salk built a Louis Kahn architectural masterpiece in La Jolla, California—the Salk Institute, and attracted a cadre of distinguished scholars. But he faced enormous difficulties: the maverick architect who spent more time dreaming than drawing; Salk’s own inept administrative skills, which left the Institute teetering on the edge of bankruptcy; a new president who said he could raise more money with Salk dead than alive; and in the end, dismissal by those for whom he had built this Shangri-La. While a scientific success, the Salk Institute proved to be a personal failure—Salk’s most painful legacy.

How the Polio Vaccine Trials Relieved a Worried Nation 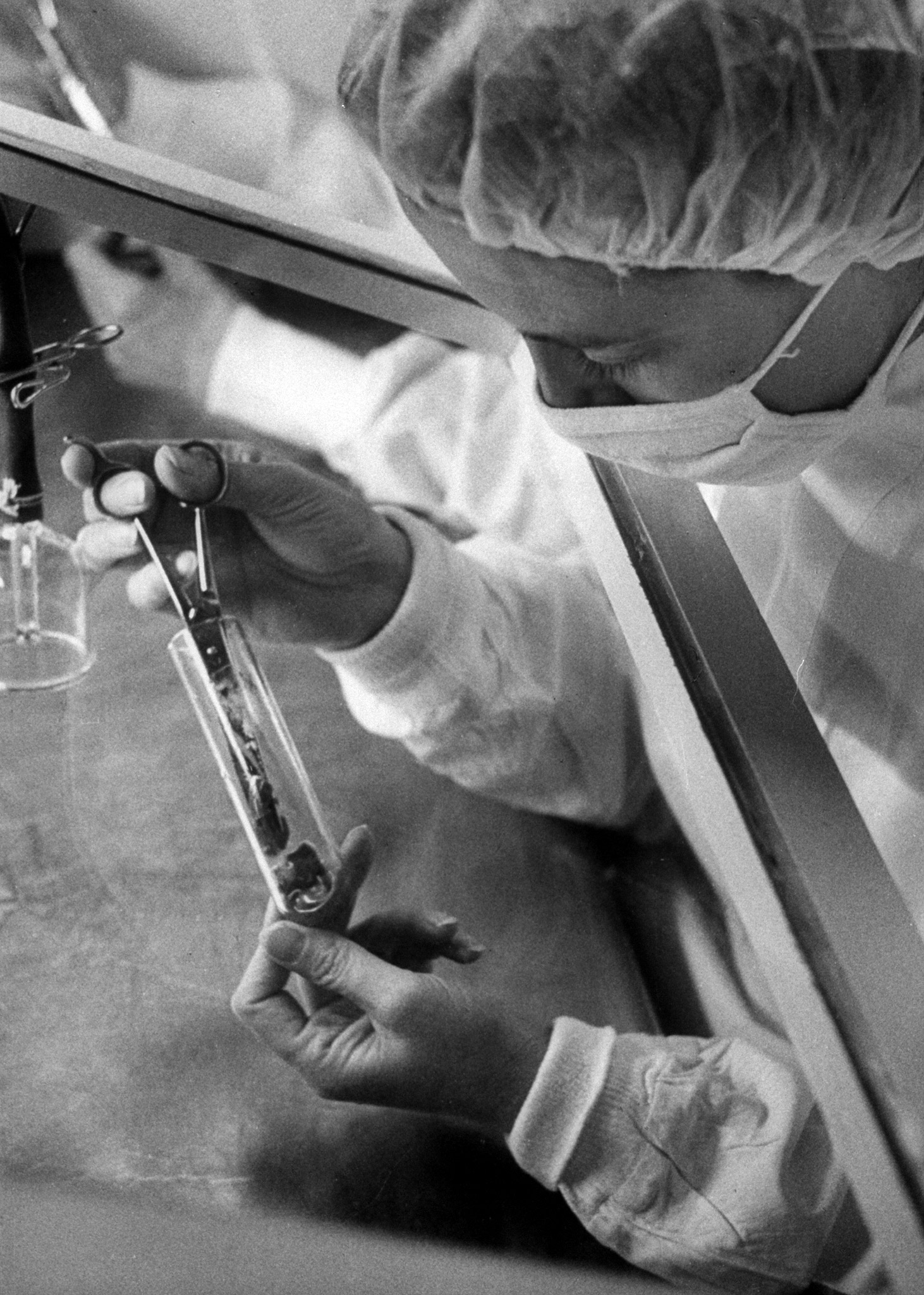 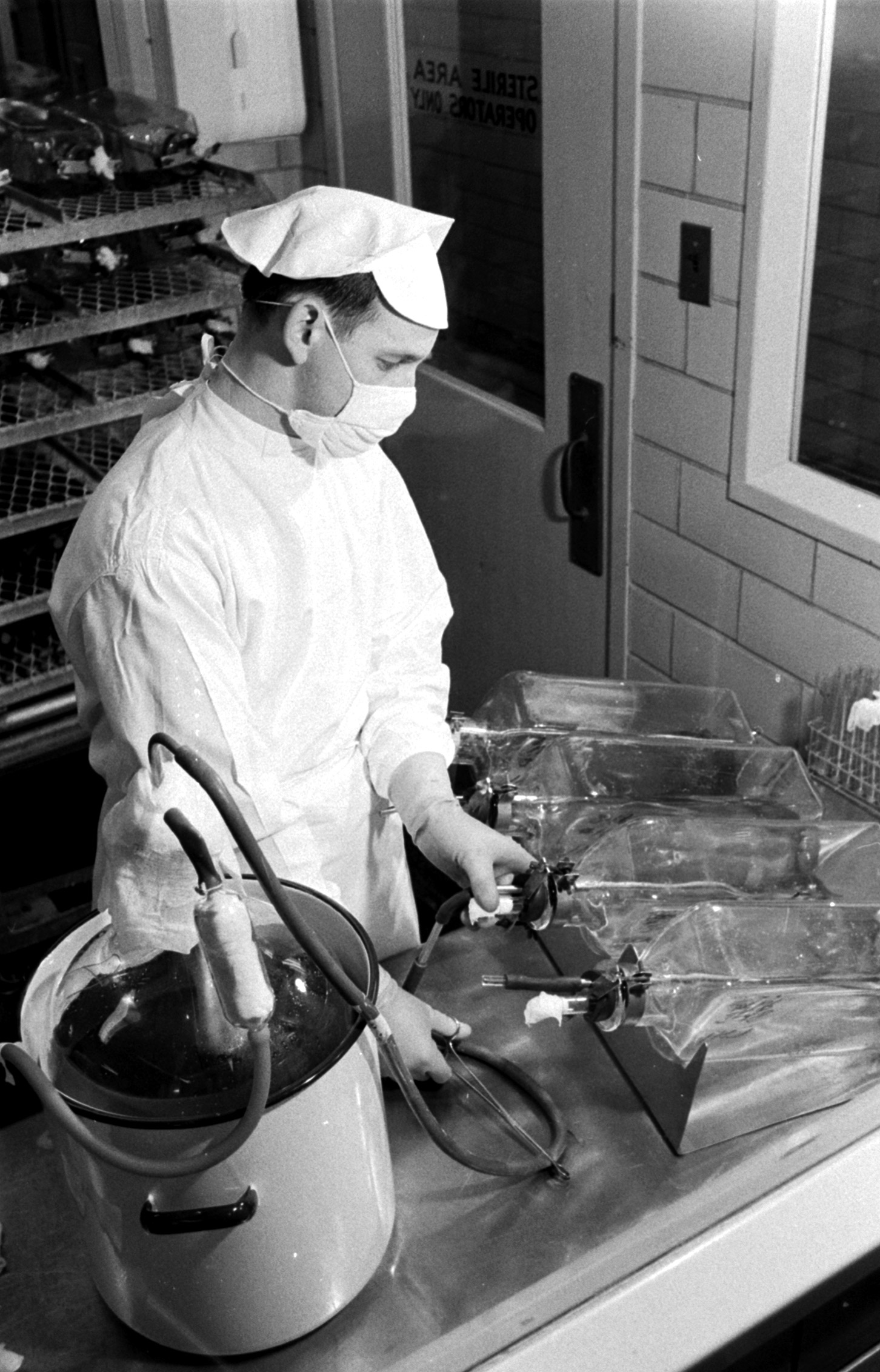 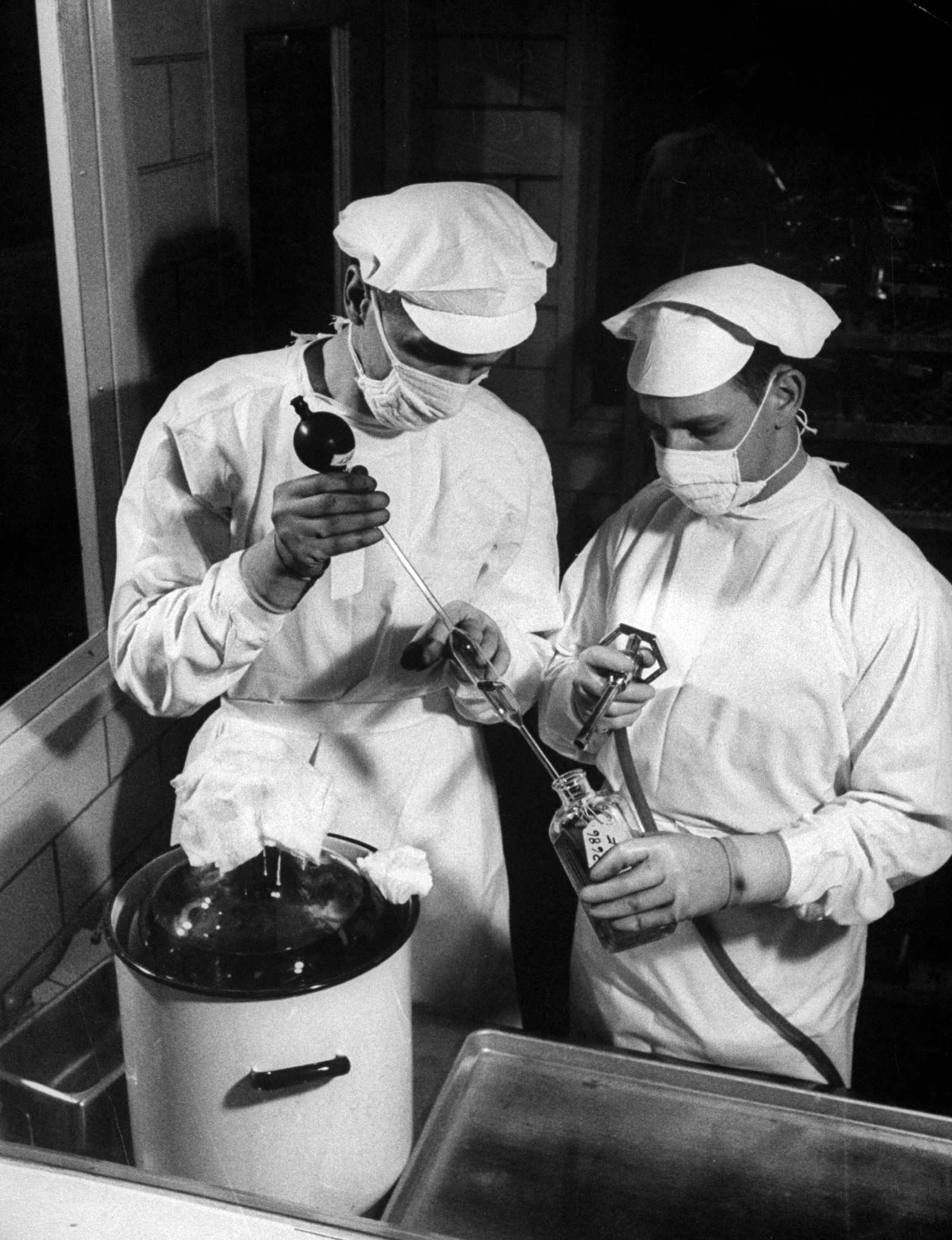 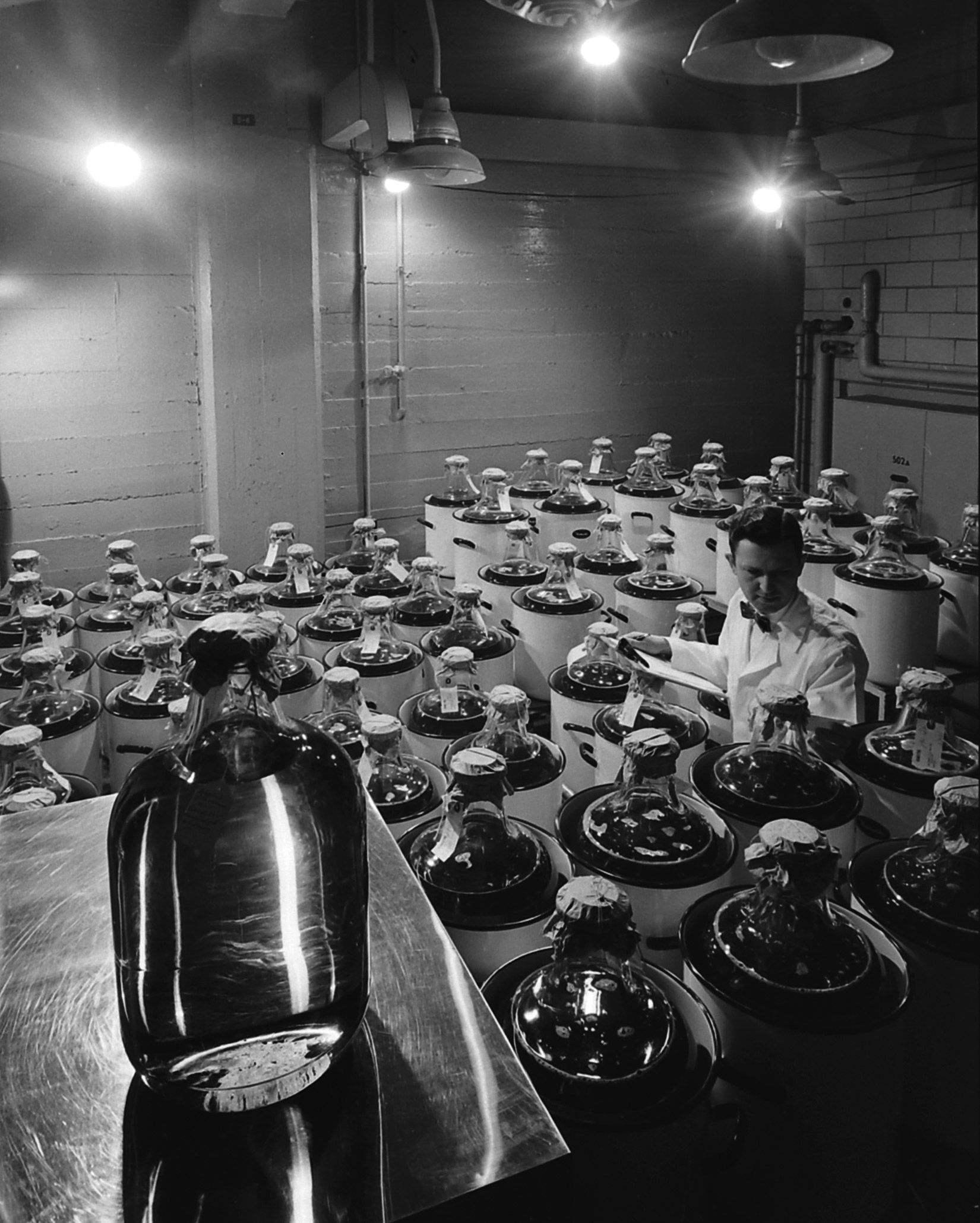 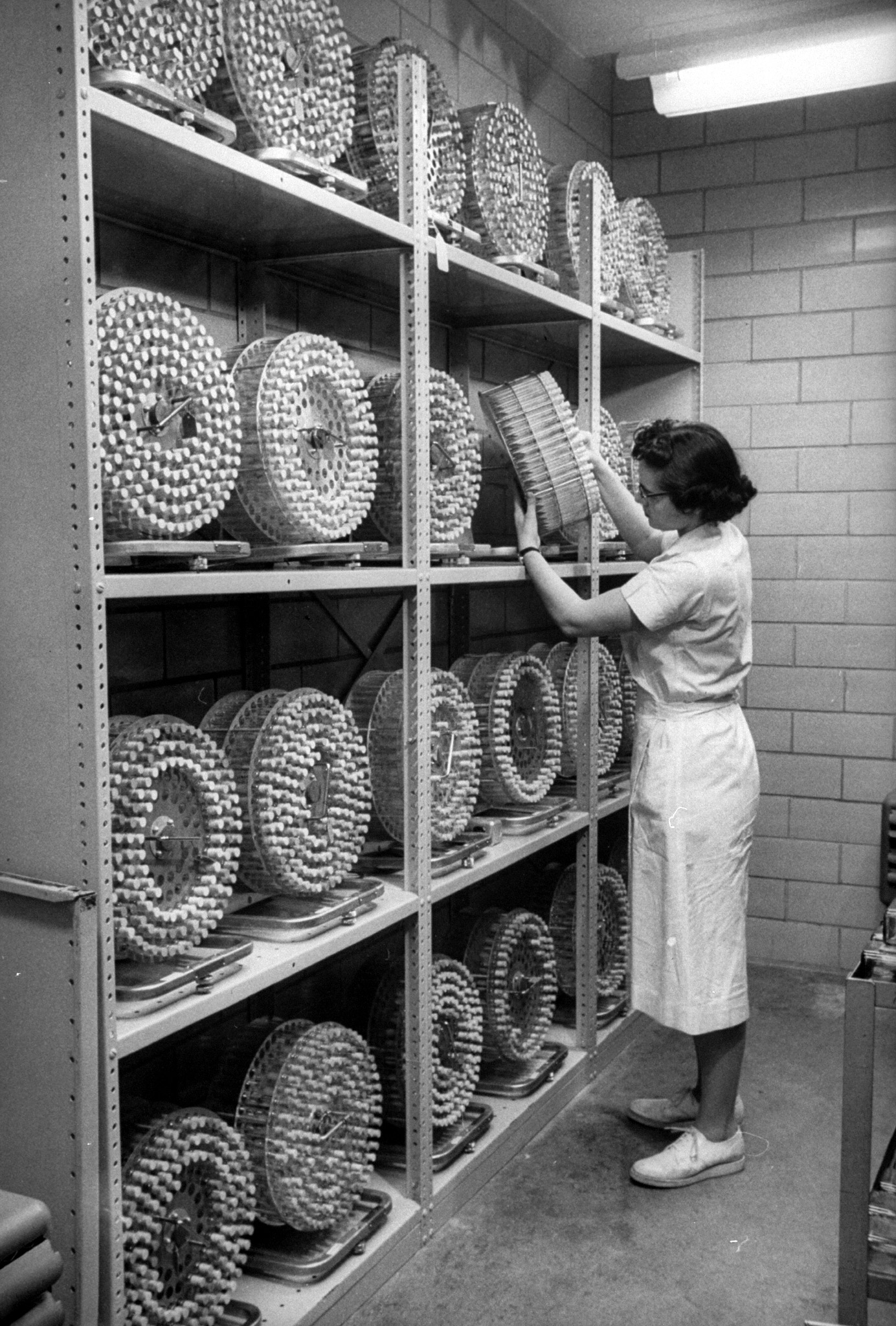 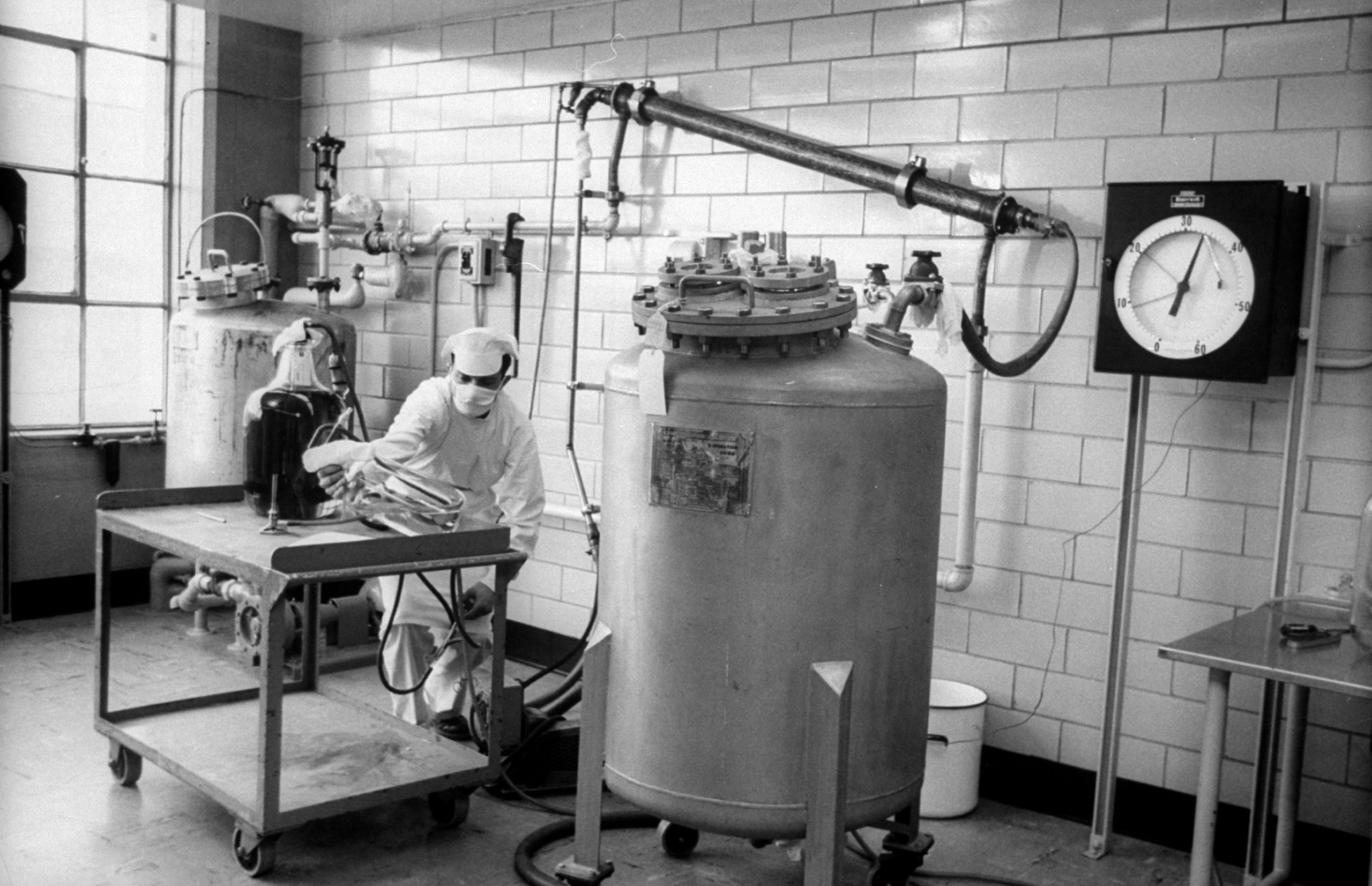 Caption from LIFE. To kill virus, worker makes up formaldehyde solution which is pumped into tube overhead simultaneously with vaccine-to-be from tank. When throughly mixed, liquid goes back into tank where formaldehyde does its work.
Al Fenn—The LIFE Picture Collection/Getty Images 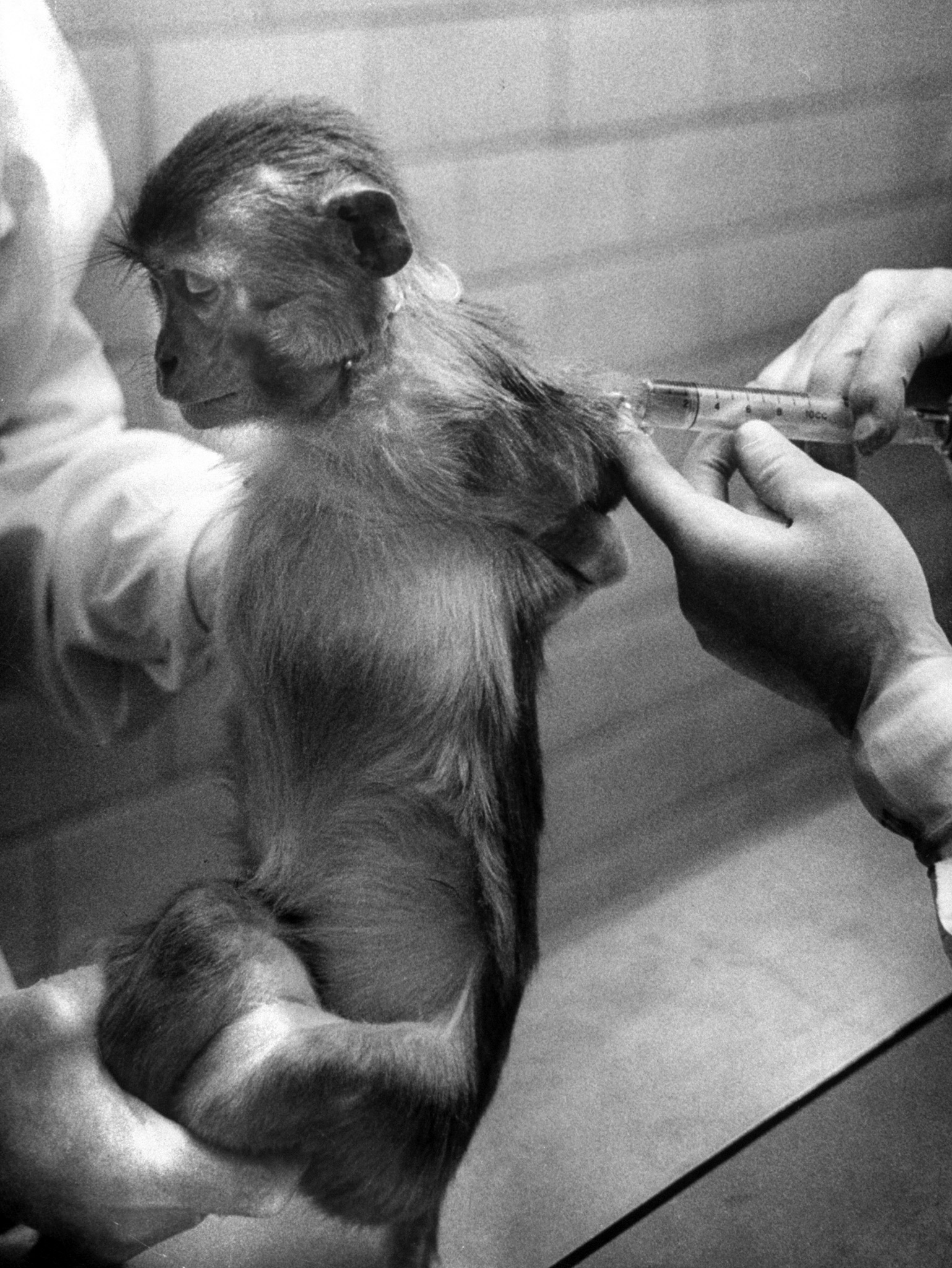 Caption from LIFE. Potency test is performed with monkey who gets injections of vaccine just as children. Blood sample is examined to see if antibodies have formed.
Al Fenn—The LIFE Picture Collection/Getty Images 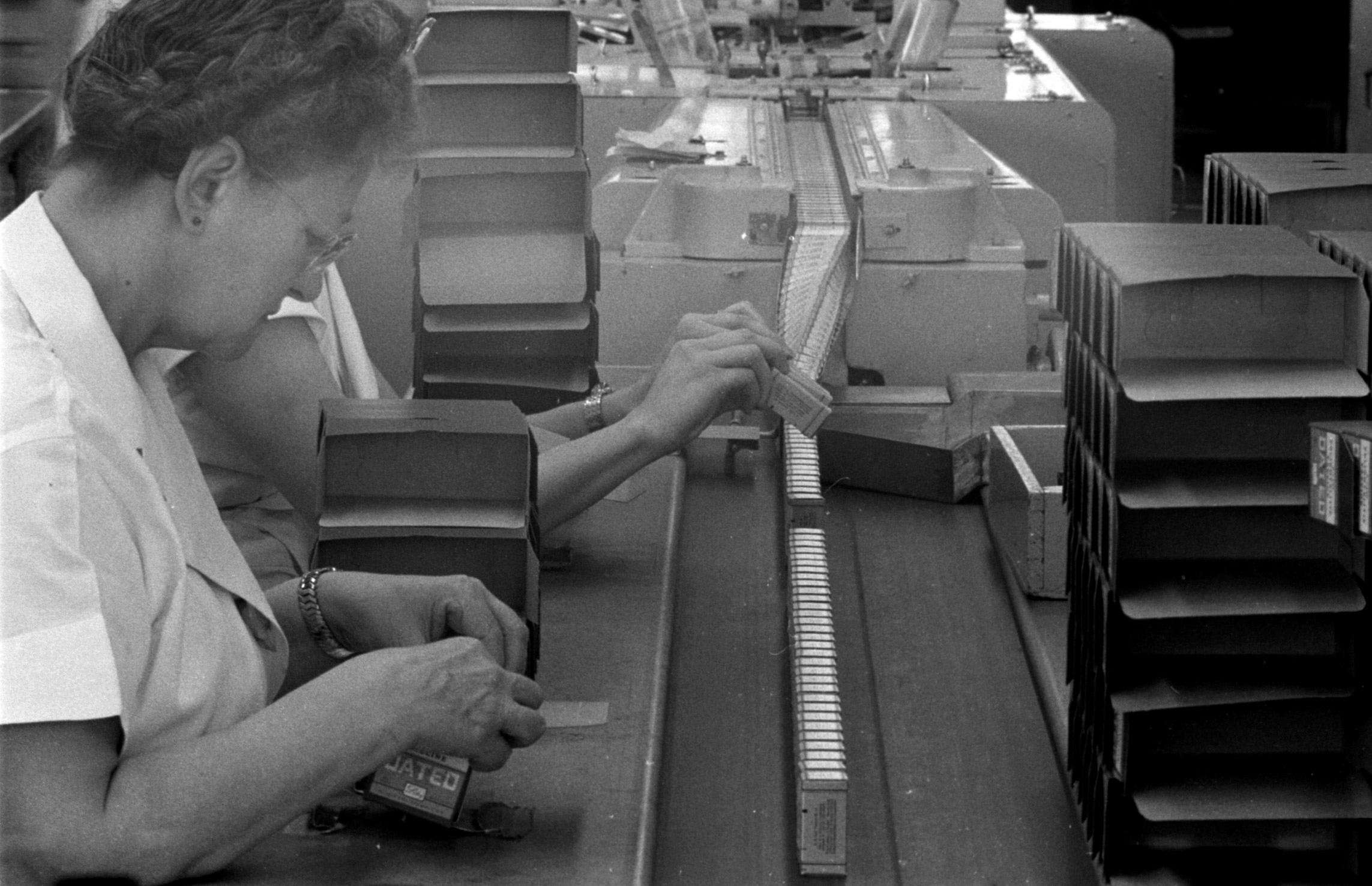 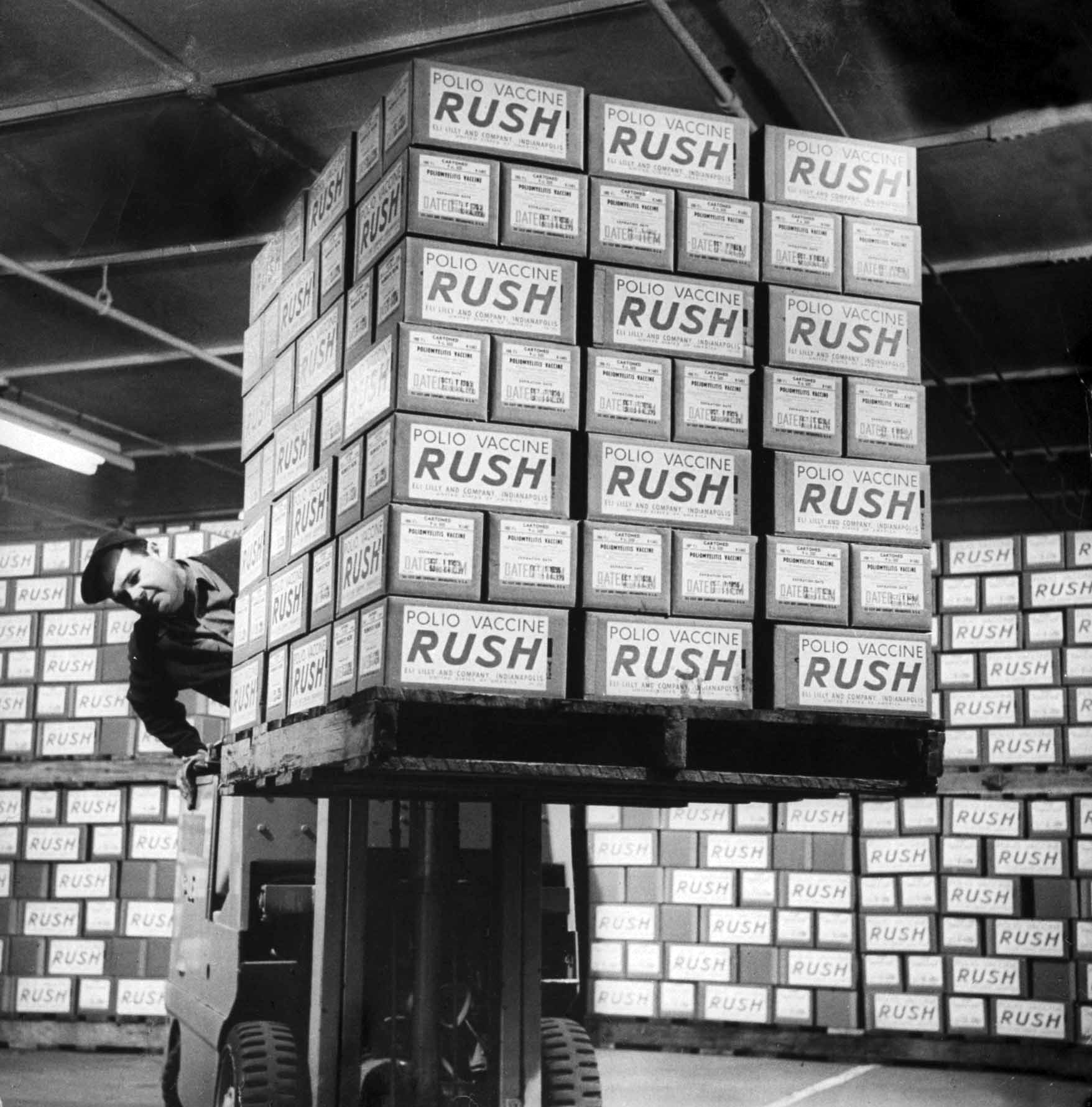 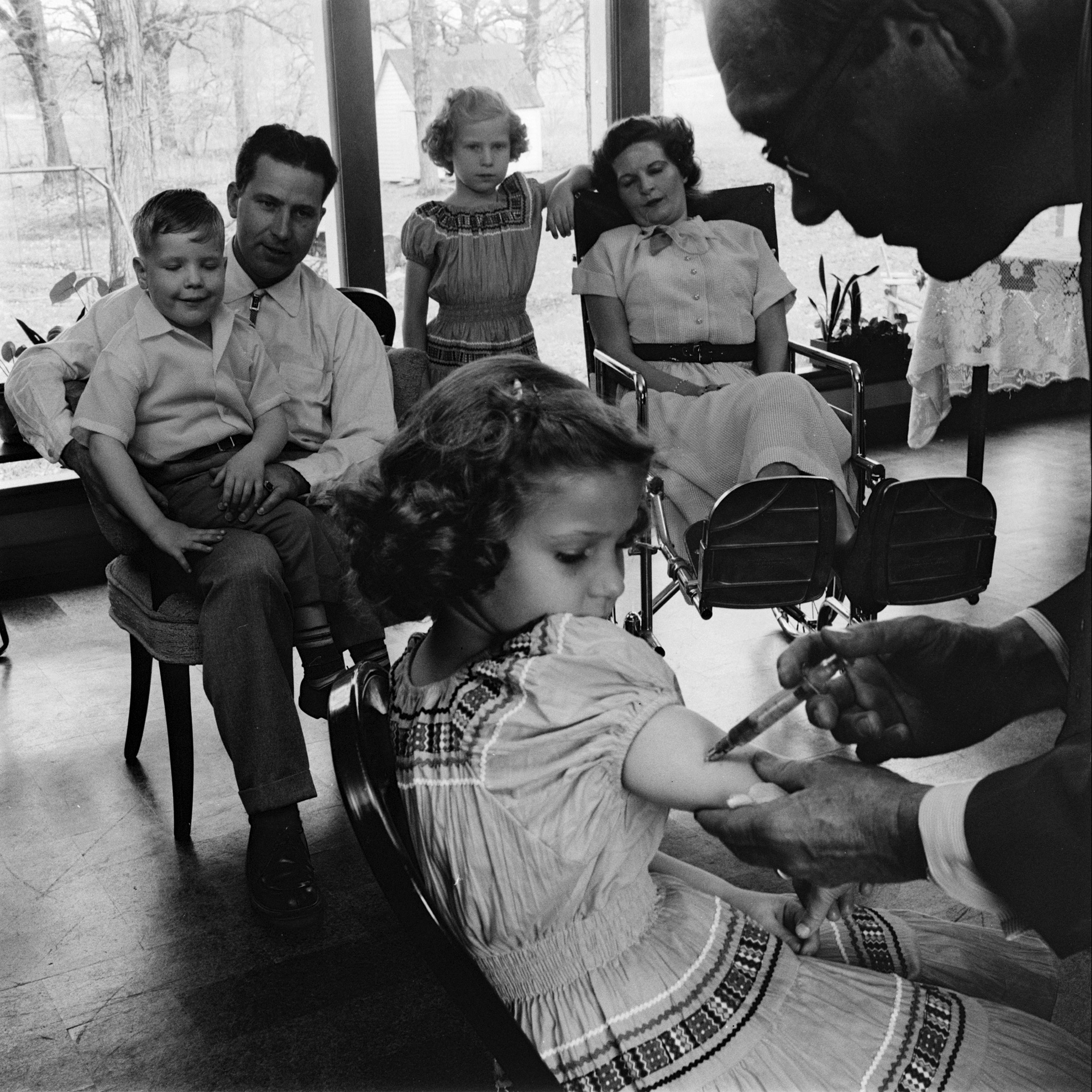 4. In the meantime, Salk’s polio vaccine remained controversial. Five years following its release, his killed-virus vaccine had reduced the incidence of paralytic polio in the US by ninety percent. Even so, most senior virologists, led by Albert Sabin, maintained that only a live-virus vaccine could eradicate polio by inducing a low-grade, almost imperceptible infection. The US Public Health Service soon replaced Salk’s killed-virus vaccine, given by injection, with Albert Sabin’s oral vaccine, made of live, weakened poliovirus, delivered in a sugar cube, citing cost and convenience. Salk warned that live virus, although weakened, could revert to a virulent form and cause polio. Eventually most cases of paralyzing polio in the US could be traced to Sabin’s vaccine, yet it had become entrenched. Salk set out to reverse what he called a risky, politically-driven decision—a sole warrior in a fight that lasted the rest of his life. In 1999, the US government recalled the Sabin vaccine, replacing it with a newer version of Salk’s vaccine. By then, Salk was dead.

5. Salk’s historical role in preventing polio overshadowed his part in co-developing the first influenza vaccine, his efforts to control multiple sclerosis, and his pioneering work on AIDS. Just out of medical training, Salk and senior virologist Thomas Francis, Jr. developed the first vaccine that could prevent influenza for which Salk got little credit. They soon discovered the influenza virus had several strains that could mutate, making prospects for a single vaccine, like smallpox, remote. Salk devised a way to put several strains in one vaccine using mineral oil. In his goal to make a universal vaccine, he was impeded by the political maneuverings of senior scientists. With regard to multiple sclerosis, Salk tried to halt its progressive debility by concocting a therapeutic agent that manipulated the immune system. He hit a blind alley, and short of research funds, abandoned this endeavor.

In his seventies, Salk entered the AIDS arena. He played a pivotal role by mediating a fight over who discovered the AIDS virus, averting an international incident. Anxious to halt this devastating disease, he made a therapeutic vaccine to delay the time between infection with HIV and development of full-blown AIDS. Some called his work an old man’s desperate attempt to recover his former glory; others thought his ideas ingenious. Although early clinical trials looked promising, Salk had reached an impasse with the FDA at the time of his death.

In seeking the man behind the image, I found Jonas Salk to be far more complex than the public image of him—America’s beloved hero—and far more sensitive and caring than the distorted image suggested by some scientists—a glory-seeking dilettante. Even-tempered and composed, Salk seemed to generate controversy no matter what he set out to do. That wasn’t his intent, but he defied conventional wisdom—“marched to a different drummer,” he said. Although he personified equanimity, his personal notes reveal a man who felt the wounds inflicted by others, a man whose passion to solve the problems of the world helped him bear the burdens generated by his fame.

Charlotte D. Jacobs, M.D. is the Ben and A. Jess Shenson Professor of Medicine (Emerita) at Stanford University. She has served as Senior Associate Dean and as Director of the Clinical Cancer Center, and is the author of “Henry Kaplan and the Story of Hodgkin’s Disease.” Her latest book, “Jonas Salk: A Life,” was released in May 2015 by Oxford University Press.