Babies in Womb Prefer a Mother's Touch to Her Voice, Study Finds

When it comes to mother-baby connections, new research suggests a mother’s touch during pregnancy elicits the greatest response.

In a recent study published in the journal PLOS ONE, researchers looked at what behaviors resulted in the greatest response from fetuses: a mother’s voice, a mother’s touch or nothing. The researchers brought 23 healthy pregnant women who were between the 21st and 33rd week of gestation into a dark room, and had them try three different behaviors.

In one, the mothers were instructed to read to their unborn child, either Little Three Pigs or Jack and the Beanstalk. In another, the mothers stroked and rubbed their abdomen. In a third, control situation, the mothers laid with their arms at their sides.

While the women performed the behaviors, the researchers used sonography to track the response of their fetus. They found that when mothers rubbed their bellies, fetuses had more arm, head, and mouth movements than when the women did nothing or when they spoke to the baby.

“Although it is speculative to suggest, it might well be that the increases in arm movements in response to maternal touch are also directed responses towards the source of the stimulation,” the authors write, suggesting that the movements are indeed responsive and intentional.

The fetuses were also more likely to touch themselves in the 3rd trimester compared to the 2nd trimester. The researchers believe this may because the skin of the fetuses becomes increasingly more sensitive.

The new study is a very small sample size, so definitive conclusions can’t be made. But the findings add to research that suggests that communicating with the unborn baby really does some good. 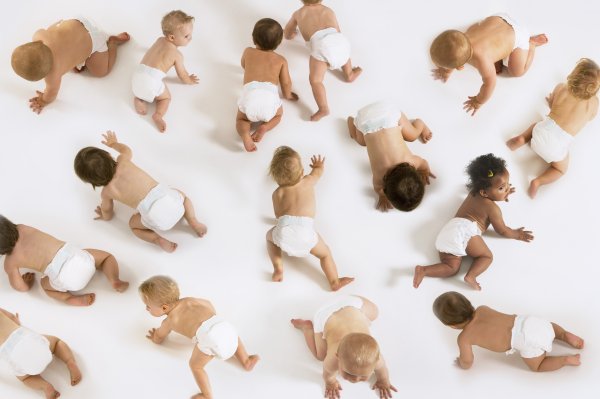 Rising Birth Rates a Good Sign for the Economy
Next Up: Editor's Pick