The FBI is investigating a website that emerged Saturday and was registered under the name of Dylann Roof, the 21-year-old white man accused of killing nine people at a Bible study group last Wednesday evening at a historic black church in Charleston, South Carolina.

Roof was arrested Thursday in North Carolina and later transported back to South Carolina. On Friday, just before Roof was charged with nine counts of murder and one count of weapon possession, Governor Nikki Haley told the TODAY show the act was a “hate crime” deserving of the death penalty. Among the victims was the church’s pastor, Reverend Clementa Pinckney, who also served as a state senator.

The website includes a racist manifesto and what appear to be pictures of Roof. The website’s URL, “LastRhodesian.com,” refers to the majority-black, white-run nation that existed in what is now Zimbabwe. Roof wore the Rhodesian flag on his coat in a photo released by authorities after the shooting.

The site includes a lengthy, racist screed that begins, “I was not raised in a racist home or environment” before detailing his disdain for and hatred of black people, Hispanics and Jews. The Associated Press, citing anonymous law enforcement sources, reported Saturday that the FBI was reviewing the website, which the New York Times reports online records show was registered under Roof’s name in February. The manifesto’s writer mentions the case of Trayvon Martin—the black teen who was shot dead by George Zimmerman, a neighborhood watch volunteer, in 2012—as “the event that truly awakened me.”

The case led the the manifesto’s writer to start researching black-on-white crime, which the writer said was being ignored by the media. In the final section, the writer states: “I chose Charleston because it is most historic city in my state, and at one time had the highest ratio of blacks to Whites in the country. […] someone has to have the bravery to take it to the real world, and I guess that has to be me.”

As authorities continued to investigate the matter on Sunday, a number of events throughout Charleston will aim to push a message of healing. Emanuel AME Church held its first worship service since the massacre, with people lined up outside well before the 9:30 a.m. ET service, AP reports. The sanctuary later filled with parishioners, many of them expected to be newcomers.. 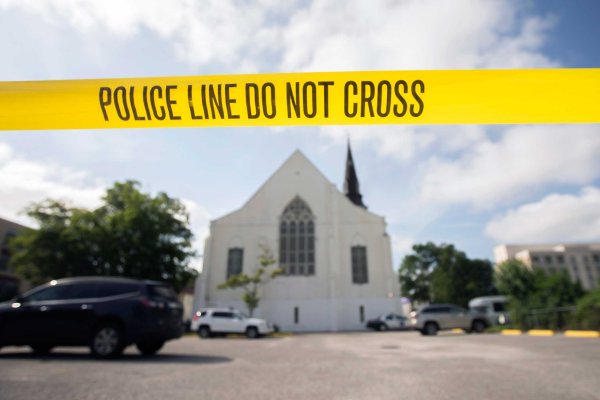 Why Some Pastors Bring Their Guns to the Pulpit
Next Up: Editor's Pick