On Your Marks, Get Set, Contort: 5 Things to Know About Modi’s Yoga Day Campaign

On Sunday morning, the Indian capital New Delhi’s broadest and grandest avenue, Rajpath, will be covered in a sea of yoga mats, with some 35,000 people expected to indulge in mass physical contortions to mark the first International Day of Yoga—a pet initiative of India’s Prime Minister Narendra Modi, who pitched the idea to the U.N. General Assembly (UNGA) in his maiden speech at the annual diplomatic confab in September. A formal UNGA resolution to establish an international yoga day was passed in December, with more than 170 countries co-sponsoring the move. Modi’s government has since gone all out to promote the first yoga day, calling its diplomatic corps into service to plan events in more than 190 countries, and releasing print and television advertisements featuring Indian celebrities.

But the government’s drive hasn’t been without controversy. As thousands limber up to mark the occasion, here are five things to know about Modi’s campaign to promote the ancient exercise regimen.

As TIME noted in a 1956 cover story, the country’s first Prime Minister, Jawaharlal Nehru, would start off each day with yoga exercises. And Nehru’s daughter, former Indian Prime Minister Indira Gandhi, was a devotee of a high-profile and controversial yoga guru called Dhirendra Brahmachari who for a time promoted the discipline with broadcasts on state television (Brahmachari also gave lessons to Nehru, and counted a string of other prominent political leaders of his time as followers). In the late 1950s, backed by an education ministry grant, Brahmachari set up a center in New Delhi to promote yoga that was inaugurated by Nehru, according to a biography of Indira by Katherine Frank.

But Modi, in addition to taking his campaign to promote yoga to the world stage, has gone further and appointed a minister in his government dedicated to yoga and traditional medicine. He’s even linked the discipline to the fight against climate change. “Yoga is an invaluable gift of our ancient tradition,” he told the UNGA in New York in September, adding: “By changing our lifestyle and creating consciousness, it can help us deal with climate change.”

His personal devotion to the discipline—he is said to spend 20 minutes each morning practicing yoga and meditation—is well known, with one aide recently telling the Reuters news agency that it was his way “to streamline his thoughts ahead of a grueling schedule.” Vladimir Putin, however, must have missed the reports of Modi’s devotion to yoga. When informed on the sidelines of an economic meeting in St. Petersburg that Modi had set up a ministry covering the ancient regimen, the Russian leader was reportedly incredulous at the news, asking: “Does Modi do yoga?”

Modi’s officials have been working to make the first yoga day an international spectacle, with events planned from New York to the world’s highest battlefield in the Himalayas

The event in New Delhi on Sunday morning is part of a massive global drive by the Modi government to promote the first yoga day. India’s foreign ministry is helping organize events in 192 countries, including the U.S., where India’s foreign minister, Sushma Swaraj, is due to attend an event at the U.N. headquarters in New York to mark the occasion. She will also call in at a mass yoga event in Times Square that is expected to be attended by 30,000 people, according to India’s national broadcaster.

Closer to home, India’s armed forces are also doing their bit to promote yoga, with plans for yoga sessions aboard the country’s warships, and even at the Indian military camp at the Siachen glacier in the Himalayan region. Often referred to as the world’s highest battlefield, both India and its longtime foe Pakistan have soldiers stationed there.

“Yoga is the soft power of India,” Swaraj told reporters at a press conference earlier this month. She wouldn’t be drawn out, however, on how much the international push would cost. “So far as the foreign countries are concerned, all our Missions have a publicity budget. Because this is a soft power India campaign, we are taking it forward,” she said. “So they will do it with their budget.”

With some 35,000 people expected to participate in the New Delhi event, the Modi government is attempting to set two world records, including the largest yoga lesson (the current record was set in India in 2005, when nearly 30,000 students from more than 360 schools participated in a yoga session in the central Indian city of Gwalior). It also wants to set a record for the number of nationalities involved in a single yoga lesson, a category it hopes to pioneer. To assess if the event passes muster, two adjudicators from Guinness World Records will be present at the New Delhi gathering, according to the Indian Express newspaper, which also reported that the government had appointed Ernst & Young as the “official auditor” for the event, charging the international accountancy firm with preparing a report for the Guinness officials.

But not everyone is pleased with the official push for yoga

Yoga is big business internationally, including in the U.S., where a recent survey showed that nearly 10% of adults and around 3% of children practiced the discipline in 2012. One 2012 study put the value of the market for yoga classes and related products in the U.S. at over $10 billion a year. For many, it is simply a way to get fit. But in India, some among the country’s minority groups have voiced concerns that the government’s enthusiasm for yoga was part of a drive to promote rituals linked to Hinduism—a charge rejected by the government and Modi’s Hindu nationalist Bharatiya Janata party (BJP).

A Hindu priest and BJP lawmaker called Yogi Adityanath added to the controversy earlier in June when he reportedly said that those who oppose a set of yoga postures known as Surya Namaskar—or salutations to the Sun God—should leave the country or drown themselves in the ocean. (Swaraj distanced herself from Adityanath’s remarks at her press conference earlier this month and said the Surya Namaskar was not part of a so-called “common yoga protocol” developed by the government ahead of the yoga day events.)

Initial reports had suggested that Modi would himself perform yoga at the New Delhi event. But his foreign minister Swaraj told reporters that while the Prime Minister will address the gathering, he won’t participate in the yoga demonstrations himself.

His senior officials, however, have been told to brush up on their yoga postures. To achieve its world record, the government has issued a circular ahead of the event putting senior bureaucrats on notice to make sure they are flexible enough on the day, for “if officials turn up without practice and their performance is not up to the mark, we run the risk of the record claim in the Guinness Book of World Records being affected.” 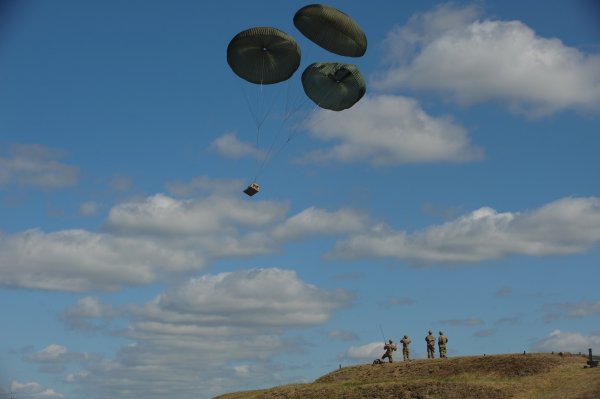