Democratic White House hopeful Bernie Sanders on Friday called for ending deportations for not just the children who were brought to the United States as young children but also their parents who are in the country illegally. It was an effort to outflank Sanders’ chief rival for the Democrats’ leading contender for President, Hillary Clinton.

Speaking to Latino elected and appointed officials in Las Vegas, the Vermont Senator delivered a rousing sermon about economic populism and social justice a day after Clinton offered remarks to the same crowd. While there were fewer reporters crowded on the press riser, Sanders still drew a full ballroom on the glitzy Vegas Strip and brought the crowd to its feet several times.

“Brothers and sisters, there is a lot of work to be done,” said Sanders, a political Independent who caucuses with the Democrats. “But when we stand up to those people on top whose greed has done so much damage to this country … there is no limit to what this great country can accomplish.”

Sanders said he backs President Barack Obama’s policy that spared some younger immigrants in the country illegally deportation. It was particularly helpful to children whose parents were brought them to the country as children, occasionally known as Dreamers.

Sanders he would expand the program to “parents of citizens, parents of legal permanent residents and parents of Dreamers.”

“We cannot and we should not be talking about sweeping up millions of men, women and children, many of whom have been in this country for years,” Sanders said to applause. He said splitting up families—leaving children in the United States while parents or cousins were sent home—was against the country’s values.

Sanders, for sure, is running behind Clinton in polling and fundraising. But he has been workmanlike in building a campaign. His slow-and-steady approach has captured the imagination of Democrats’ most liberal corners, who are skeptical if not hostile to a second Clinton being President.

Sanders has been tapping into that sentiment, all the while avoiding any direct criticism of the former Secretary of State and Senator. Clinton remains the party’s favorite candidate and has a far larger political machine behind her.

“American kids who deserve the right to be in the country they know as home,” said Sanders, whose father came to the United States from Poland. “We are a nation of immigrants. That is, in fact, the strength of America.”

As Sanders made his way toward the exit, conference participants rushed toward him, cell phones held overhead to snap pictures and arms stretched out to shake his hand. He may not win the Democrats’ nomination but he certainly spoke to the party’s base. 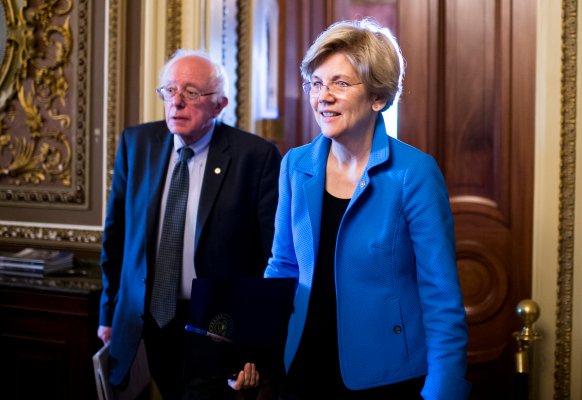