Why Elephant Advocates Crushed A Ton of Ivory In Times Square

Hundreds of ivory trinkets sit on display in New York's Times Square before their destruction.
Justin Worland
By Justin Worland

More than a ton of ivory taken from poached animals was crushed in New York’s Times Square on Friday to highlight the threat of the ivory trade to the African elephant. Environmental activists say the ivory crushing gathering, which featured lawmakers, wildlife advocates and celebrities, will show that the illegal ivory trade can’t continue.

When the speeches concluded, a 25-ton rock crusher buzzed to life and began grinding the first of hundreds of seized ivory pieces into a sand-like pulp. The hundreds of wildlife supporters gathered to watch broke out in applause as shards of ivory flew from the machine. The destroyed ivory, along with six tons that were destroyed in 2013, will be used to create an elephant memorial.

The event comes the week before the U.S. is expected to issue new regulations prohibiting the ivory trade, and weeks after the Chinese government said it would plan to do the same. Wildlife activists say such actions have never been more urgent. The prevalence of elephant poaching has increased in recent years, largely as a result of increased demand for ivory in China, and as a result, elephant populations have dwindled. Fewer than 500,000 elephants roam Africa today, and poachers kill 50,000 more each year.

Destroying ivory that has been traded illegally may seem like a no-brainer, but the practice has drawn criticism from a variety of groups, including some who support the conservation of wildlife. Some say that ivory contains evidence that could be used against traders. Others argue that ivory crushes reduce the supply and increases the likelihood that poachers will hunt for elephants, they say.

But the groups behind the ivory crushing say the public awareness of the event far outweighs the reduction in supply that destroying ivory may cause.

“I had no idea that the U.S. was one of the largest ivory markets in the world,” said Food Network star Katie Lee, who works with conservation group 96 Elephants. “Every time I tell someone the statistics, they’re shocked. The more people that hear about this, the more change that can take place.”

Jeffrey Flocken, who leads the International Fund for Animal Welfare’s North American branch, described the one ton load as “a drop in the ocean” when it comes to satisfying “infinite demand.” Still, he said, crushing the ivory sends a clear message that the illegal trade won’t be tolerated.

(An earlier version of this article mischaracterized Jeffrey Flocken’s statement.) 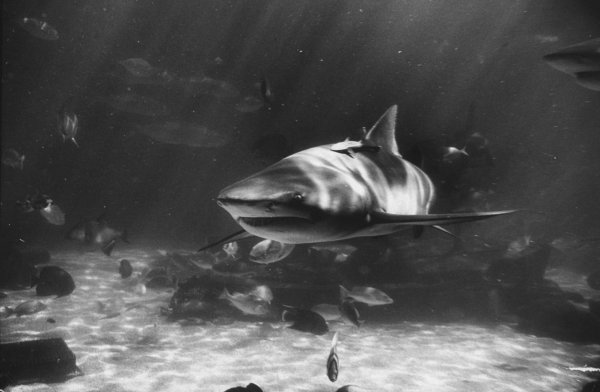 Celebrate the 40th Anniversary of 'Jaws' With These Vintage Shark Photos
Next Up: Editor's Pick