Here's Why the Confederate Flag Is Still Flying in South Carolina

The Confederate flag is still flying on the grounds of the state capitol in Columbia, S.C., less than 48 hours after a gunman murdered nine black worshippers in a church shooting that is being investigated as a hate crime.

Some are now demanding that the Confederate flag, considered by many to be a symbol of racial oppression, be removed from the state capitol. A MoveOn.org petition asking South Carolina Gov. Nikki Haley to remove the flag has gotten more than 100,000 signatures in less than 24 hours. Some lawmakers are also planning to introduce legislation to take the flag down.

So why is the Dixie Flag still flying?

Part of the answer is political. The South Carolina Heritage Act of 2000 stipulated that the Confederate flag would be removed from the capitol dome itself, but would be flown nearby at the Confederate Soldiers’ Monument, on the Statehouse grounds. It’s literally locked into place—State Representative Leon Howard told TIME that that the flag is padlocked to the flagpole to prevent tampering or removal.

Because of the strong support for the Confederate flag among many South Carolina voters, some political scientists have said that advocating for flag removal is the equivalent of political suicide in the state—Republican Governor David Beasley lost his 1998 campaign for re-election partly because he wanted to take down the flag.

In this climate, there’s little chance that a bill to remove the flag will pass, said Rep. Howard, a Democrat who serves as chair of the House Medical, Military, Public and Municipal Affairs Committee. Howard said that the legislature is divided down party lines on the subject of the flag, and he thinks his Republican colleagues are unlikely to change their minds on this issue.

“Defenders of the flag are going to say, ‘if the flag had been taken down and put away, this senseless act would have happened anyway, this would have not deterred this young man from taking a gun and killing these people,'” he told TIME. But even though he’s less than optimistic, he thinks the massacre in Charleston has brought the legislature “closer to moving it than ever before.”

The flag of the Confederate States of America has had a fraught history in the South since the Civil War, but supporters say it represents a symbol of Southern heritage, a history they associate with honor and valor, not racism.

Here’s an excerpt from a 2001 TIME story on Southerners who cling to symbols of the Old South, quoting Chris Sullivan, editor of Southern Partisan magazine, which celebrates the Confederate cause:

The refusal to believe that the war is over, according to the 2001 story, is linked to anxieties about the erosion of white people’s economic status in the face of racial progress.

And yet, as Ta-Nehesi Coates points out at The Atlantic, the Confederate flag is a symbol of a culture that was not just accidentally racist—racism was baked into the very purpose of secession. Here’s an excerpt from the 1861 “Corner Stone” speech, by Confederate Vice President Alexander Stephens, explaining the purposes of the Confederacy:

The debate over whether the flag should be flying on state property has been batted back and forth for decades, often used as a political tool by national politicians. Joe Biden demanded the flag be removed from the South Carolina capitol back when he was a presidential candidate in 2007, and John McCain waffled on the issue during the same election.

Correction: An earlier version of this post misused a colloquial description of the confederate flag. “Stars and Bars” is a term for an earlier design of the same flag. It also misidentified the state capitol, which is Columbia. 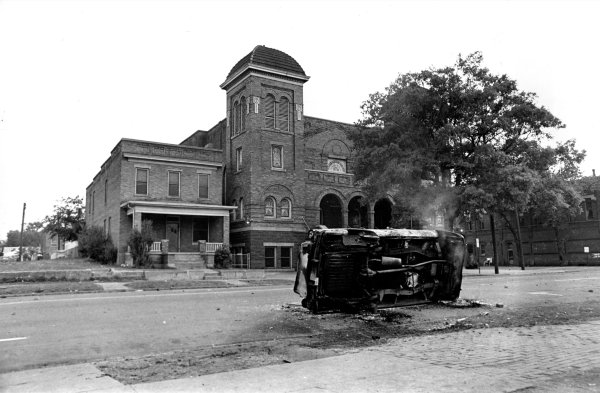 1963 Church Bombing Survivor: The End of Hatred Starts With You
Next Up: Editor's Pick