What Parents Can Learn From Inside Out

Amy Poehler stars as the personification of Joy, left, with Phyllis Smith starring as the voice of Sadness.
Pixar/Disney
By Belinda Luscombe

All parents want their kids to be happy. I mean, obviously. But for most of history in most of the world that has meant keeping them from hunger and death and physical bodily harm. What happens when those threats aren’t quite so looming? Pixar’s new movie is an examination of our modern obsession with keeping our kids in a permanent state of delight. It could be the ultimate anti helicopter-parenting movie.

Of course, like all Pixar movies, it’s also about eccentric characters going on an unlikely adventure. In this case, our heroines are exploring the inner workings of that undiscover’d country, the brain. And those heroines are Joy (voiced by Amy Poehler, this generation’s go-to embodiment of spunk and optimism) and Sadness (voiced, with wonderful melancholy, by The Office’s Phyllis Smith).

Joy is a type-A workaholic, running around manically to make sure the little factory that is the brain of Riley, a Minnesotan girl who has recently moved to San Francisco, is always fully stocked with upbeat feelings. She tries to keep her co-workers, Anger, Fear and Disgust in line. But most of all she wants to sideline Sadness. Sadness’s chubby little blue hands are not allowed to touch any of the childhood memories that roll like marbles into Riley’s brain.

Especially precious are the more brightly gleaming marbles that represent the core memories. When one of those arrives in the processing room and it’s blue, not chatreuse, meaning it’s sad, not happy, Joy takes extreme steps to prevent it from finding its permanent place in the brain. And ultimately, that puts Riley at risk.

The parallels with modern parenthood are hard to miss here. Feeding and protecting kids from existential threats is no longer the absorbing task it once was, but the instinct to raise happy kids doesn’t go away. So parents try to stave off any potential source of distress—a failure, a loss, a heartache—by flooding the zone of childhood with delight.

For a start, this is exhausting—anyone with less energy than Amy Poehler would just lose her mind—and secondly, it’s counterproductive. Without sadness or failure, kids can’t build resilience. The little islands of security that Joy has built in Riley’s brain, with very little input from Fear, Anger, Disgust or most of all Sadness, prove to be quite fragile and not very colorful.

In his book on building resilience in kids, Grit, Paul Tough quotes the principal of a prestigious U.S. school: “The idea of building grit and building self-control is that you get that through failure. And in most highly academic environments in the United States, no one fails anything.” Spoiler alert: Joy comes to understand that sadness has its place too, that it’s a useful and necessary emotion.

Inside Out doesn’t just gently and comically suggest that perhaps we are making our kid’s lives unhappier by trying to make them happy, it offers an alternative: Riley’s actual parents. Her dad has moved to San Francisco for a startup and is obviously under a bit of stress. Her mom is distracted by the stress of finding a missing truck with all their belongings. (Some Pixar peeps clearly have their issues with moving companies.) But they’re there for Riley. They ask if she wants them to take her to her new school; she doesn’t, so she goes alone. They find a new hockey league for her, but don’t make her join. They make a fool of themselves to support her, when that seems appropriate.

They don’t notice her unhappiness, and she makes a few ill-conceived decisions, but, of course—spoiler alert again!—she realizes her error. Pixar has always made movies for adults cleverly disguised as movies for kids, and and Inside Out is no exception. It simplifies certain concepts in brain science, but it illustrates others in a way that almost anyone could grasp —the dream studio is a particularly inspired sequence—and that may make it simpler for grownups and kids to realize why they’re feeling as they do. As Tough says, “Any time you need to use the term hypothalamic-pituitary-adrenal in order to make your point, you’ve got trouble.”

One note of warning. Some people have labeled the movie PMCIFOTC. (Parents May Cry In Front Of Their Children.) Adults should be accompanied by an understanding minor.

Please subscribe to TIME’s weekly parenting newsletter here. All the fun, none of the scolding. 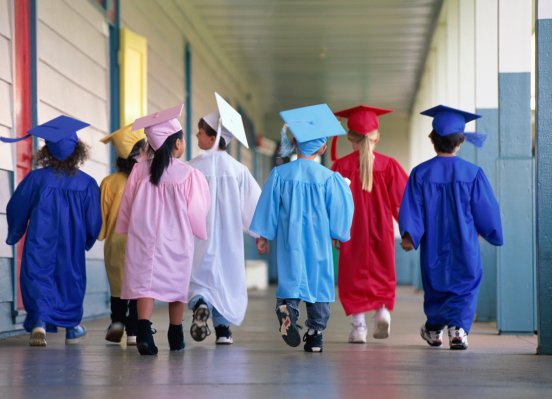 Why I Hate Gratuitous Childhood Graduations
Next Up: Editor's Pick