British Family of 12 Has Crossed Into ISIS Territory in Syria

Akhtar Iqbal, husband of Sugra Dawood (L), and Mohammed Shoaib, husband of Khadija Dawood, react during a news conference to appeal for the return of their wives and children, in Bradford, northern England, on June 16, 2015.
Paul Ellis—AFP/Getty Images
By Tara John

A smuggler in charge of the border operation of the Islamic State in Iraq and Greater Syria (ISIS) confirmed to the BBC that three sisters from Bradford, U.K., and their nine children have split into two groups and crossed into Syria. The first group went in on Wednesday and the second on Thursday.

The sisters, Khadija, Sugra and Zohra Dawood, and their children were reported missing on June 11 following a pilgrimage to Mecca in Saudi Arabia.

It was also reported that one of the sisters, Zohra, had sent a message to her family saying that she was inside Syria but did not detail where.

Two of their husbands, Akhtar Iqbal and Mohammed Shoaib, made an emotional appeal during a press conference on Tuesday imploring their families to return home.

The women’s brother is believed to to be fighting with ISIS in Syria. 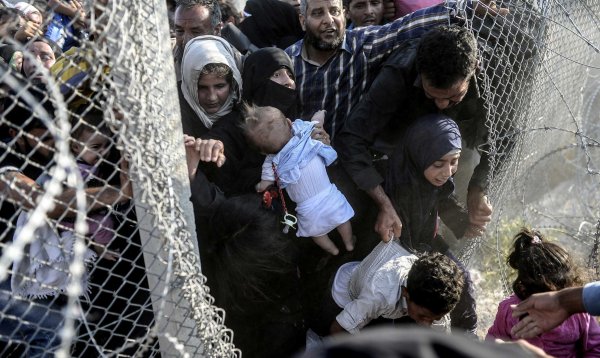