Whether you’re a longtime superfan or so repulsed that the color grey now makes you squirm, it’s probably been next to impossible to avoid news about Grey, E.L. James’s companion book to the Fifty Shades trilogy, told from Christian Grey’s perspective. From psychopathy to predictability, here’s what the early critics have to say:

“The first book was a rather fun and fairly mild portrait of a woman’s sexual fantasy. Yet it is almost impossible to read Grey and not assume the narrator is going to end up in jail. It is most reminiscent of those thrillers that open from the point of view of the heavy-breathing murderer stalking his prey. Instead of lighthearted and repetitive mild S&M, the ‘love affair’ is now the twisted work of an utter psychopath.”

“Grey, the fourth book from EL James, is about as sexy as a misery memoir and as arousing as the diary of a sex offender. … This, then, is the best the 21st century can come up with in terms of romantic literary heroes – a cut-price Mr Darcy in nipple clamps. … The message here is clear: we are supposed to pity him. And yet the only person I pitied was poor old Anastasia, who, having had her opportunity to tell her side of the story in the Fifty Shades trilogy, has been written, in this book, with all the personality of a blow-up doll. “

The Washington Post: ‘Grey: Fifty Shades of Grey as Told by Christian’ is far too serious and for fans only

“However one feels about the series, there’s no denying that Grey, released worldwide Thursday, is a completist’s dream. It retells the story of Fifty Shades of Grey and the earliest section of Fifty Shades Darker in Christian’s perspective. It is a behemoth of a book, 557 pages of Ana and Christian’s fraught and at times unsettling love story, here made more unsettling by the truth that fans already know: Christian is not just dark and mysterious; he’s everything he warned Ana he was in the original book. He’s unquestionably ‘fifty shades of [expletive] up.’”

The Telegraph: I read the new Fifty Shades of Grey and it was less sexy than an eye test

“… it turns out that Christian Grey isn’t just fifty shades of f***** up (there’s a whole thing about a peeled ginger root in a place that a ginger root should never be) but he’s also about a million different shades of sexist.”

“Here the flesh strung between the narrative bones reveals Mr. Grey to be an even more deeply unpleasant, insecure asshole than your correspondent had previously imagined. And no more three-dimensional. … Most chapters begin with dream-vignettes of his abusive childhood (with the exception of one hideous wet dream about two thirds of the way through). But if these were meant to help give him depth and excuse his less savoury behaviour then they resoundingly fail.”

“After the movies, do we really need Grey’s little interior asides, ‘Maybe this could work,’ for example? Is there anything we don’t know about him already? … Grey’s self-loathing comes alive in predictable expletives — and predictable cliches as realizes his pull to Ana is ‘like a moth to a flame.’” 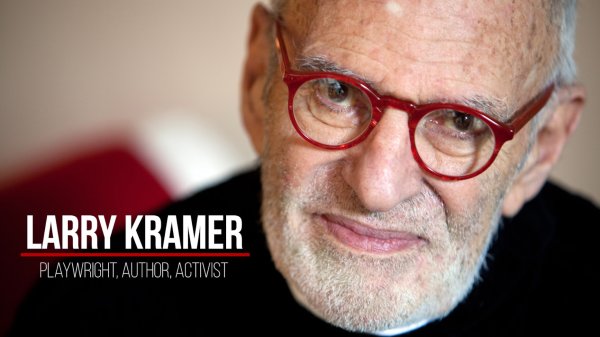 AIDS Activist: 'I Don't Regret Anything I've Done or Said'
Next Up: Editor's Pick