The Best Twitter Reactions to the L.A. Clippers' New Logo

The Los Angeles Clippers, the city’s perennial “other” NBA team, have seen a remarkable resurgence under new owner Steve Ballmer and are trying to emerge from the shadow of the Lakers (and the headlines of the recent past, which they made for all the wrong reasons).

That resurgence includes a brand new logo, which Ballmer unveiled on Conan Wednesday night. He also took fans behind the scenes (well, kinda) in a video on comedy website Funny or Die, which shows the team trashing all Ballmer’s ideas before their star player Blake Griffin steps up to the plate as he does so often on the court.

Many fans didn’t love the logo as much as Conan O’ Brien or the Clippers players did, however, and took to Twitter to express their displeasure.

Others thought it looked a bit…childish.

One even pointed out that giving ownership of the team to Ballmer, the former Microsoft CEO who took over last year, made this fiasco inevitable.

But Ballmer doesn’t care much for the haters, telling the Los Angeles Times that change is always difficult at first.

“If you love the Clippers, you’ll love the new Clipper logo,” he insisted. 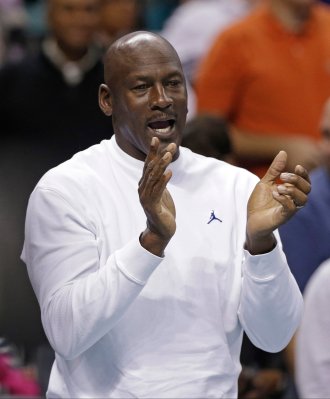 Michael Jordan Is 'Pretty Sure' He Could Beat Hornets Players One-on-One
Next Up: Editor's Pick