American women have been marching off to war in increasing numbers over the last generation. Soon, the Pentagon expects to lift its ban on their service in ground combat, its most demanding, dirtiest and bloodiest form. Is this a good thing?

In Women at War, Army veterans Elspeth Cameron Ritchie and Anne L. Naclerio have produced the first book detailing what war does to the physical and mental health of the growing number of women waging it. Featuring contributions from many military and academic experts, the volume doesn’t advocate putting women in the trenches. “Women are already in combat,” says Ritchie, a psychiatrist who earned three combat patches before retiring from the Army as a colonel in 2010. The book also doesn’t wade into the controversy over whether women have the physical strength to accomplish the mission. Instead, it collects widely-scattered data about what combat does to women and puts it in one place to serve as guidance as the number of female soldiers, sailors, airmen and Marines slowly rises.

Bottom line: women can do it, but it may not be easy.

Some 2.5 million women have served in uniform since the Revolutionary War, Lieut. General Patricia Horoho, the Army surgeon general, notes in the book’s forward. “Given recent policy changes, by January 2016 it is expected that all military occupations, positions, and units will be open to women,” she adds, “thus ensuring that they will play even larger roles in future military operations.”

The number of women engaged in major U.S. combat operations is steadily growing. They climbed from 770 in 1989’s Panama invasion, to 41,000 in 1991’s Gulf War, to 300,000 in the post-9/11 Afghanistan and Iraq campaigns. About 15% of U.S. troops today are female. They represented 10% of those deployed to Iraq between 2003 and 2011, and 8% of those sent to Afghanistan between 2001 and 2013 (they were under-represented because they are generally barred from serving in combat units. That also accounts for the fact that they represented only 2.3% of U.S. troops killed in action).

More facts from the book:

The 40 contributors (including 10 men) write about women’s health on the front lines and the challenges of being a soldier and a mother. “Mothers who deploy may be viewed as uncaring or negligent, rather than serving selflessly and patriotically,” Army psychiatrist Elizabeth C. Henderson writes. “It is more culturally acceptable for men to go to war.”

“I tried to avoid thinking of [my child] most of the time,” a mother deployed to a war zone said. “I had something to do right after every phone call so that I would not retreat to my tent and start crying.”

Women in uniform also are subject to shunning by their male colleagues. “Women who are working in primarily male career fields—or, as in the military, are breaking into previously closed combat positions currently held by males—may suddenly find themselves part of a social group that has difficulty fully accepting or integrating females,” writes Pentagon psychologist Kate McGraw. “The negative impact of this type of behavior may intensify during periods of high stress, such as in combat or deployed locations.”

But experience can ease such trepidation. “I felt tremendous pressure to live beyond reproach, and over time, I have learned that this is an incredibly intense, stressful, and ultimately unsustainable and inhumane way to live,” then-Lieut. Paulette Cazares wrote of her first tour as a doctor aboard a U.S. Navy submarine. “Come the second year and second deployment, I was able to dance in bars at ports of call and enjoy a cigar with the CO and know I was on stable footing.”

She also writes that her time aboard gave her the confidence she needed to save a young female sailor from dying of appendicitis on what was supposed to have been a quiet Thanksgiving. “At the beginning of that deployment, I would never known or had the courage to … demand that a helo move faster,” she recalls. “But a few months at sea made this girl a little saltier than she was when she left San Diego.”

Being different can pose challenges when nature calls. “In 2011, with all our sophisticated battle systems and unarmed aircraft, women in combat were still wearing diapers because we hadn’t figured out how they could take care of basic bodily functions in the back of an armored personnel carrier or transport vehicle,” Naclerio says. There remains, after a decade of war, ignorance among both military women and their medical advisers about minimizing such issues, she adds. (Only 4.5% of women in Iraq in 2005-2006, for example, were using commercially available female urination devices, which allow women to relieve themselves like men.) Both Naclerio and Ritchie express surprise at how little research has been done to smooth the integration of women into the military.

Sexual assault is a “major issue” in the U.S. military, the book notes, and has received extensive professional and press coverage. But there has been scant attention paid to consensual sex in the ranks downrange. “A taboo area seems to be the sexual desires of women who deploy,” the authors write. “But young women—and most women who deploy are young—do have sexual desires, perhaps heightened by the daily exposure to death and close bonding in the combat zone.” This taboo has led to a dearth of information. “We have very little knowledge of the actual amount of consensual sexual activity that is occurring during deployments between military members because very little research is done on that topic,” writes Navy psychiatrist Ann Canuso. (Think of it as a new version of “don’t ask, don’t tell.”) “Studies indicate that as many as 12% of deployed women had an unplanned pregnancy during deployment in 2008.

The dearth of women on the front lines makes them a rarity. But that’s slowly expected to change. Navy Secretary Ray Mabus said last month that he wants 25% of Marine recruits eventually to be women, more than triple their current 7% of the corps.

But until that happens (and Marines, both male and female, believe it’s a tall order), women on the front lines will continue to feel like they live in a fishbowl. “My presence there seemed to make everyone stop and stare,” one forward-deployed woman told Canuso of her visits to the gym. Some of their male counterparts acknowledged their role. One told Canuso about the time he was instructing other young men when a female colleague walked by in her workout gear. “We all just stopped and stared at her for almost a full 30 seconds,” he said. “Then I just went back to teaching the men. I never would have done that stateside.” 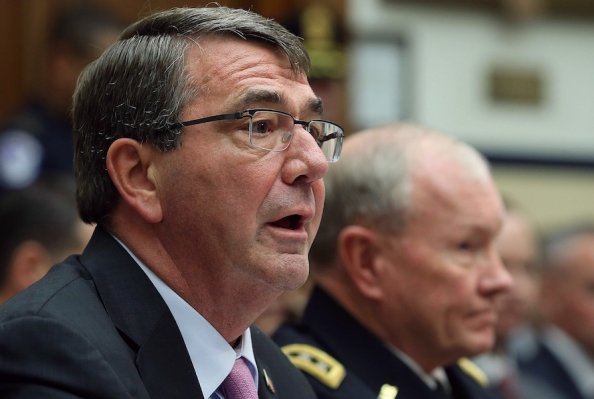 The Other Body Count in the Battle Against ISIS
Next Up: Editor's Pick