Review: Ballers Throws a Flag on the Playboys

When HBO announced Ballers, I expected–well, look at the title. Even before the Entourage movie landed in theaters, the last thing HBO needed creatively was another big swinging swing at dudes in a glamor career–here, pro football–the hot chicks who pose and grind around them, and how generally awesome it is to be awesome. That the show was set in flesh-friendly, booty-popping Miami rather than, say, Green Bay, seemed a statement of intent.

And yeah, often times Ballers (premieres June 21) delivers exactly that show. Take the third episode, in which former Dolphin linebacker turned financial manager Spence (action star / living marble statue Dwayne Johnson) throws a party on his boss’ yacht to lure in current players as clients. There are players (of both kinds), cosmetically enhanced babes in and quickly out of bikinis, expensive liquor and more expensive mishaps. In the second episode, a player treats himself to a flaming orange McLaren, the precise douchemobile, down to the color, owned by billionaire boor Russ Hanneman in Silicon Valley. In these moments, Ballers looks like the love child created if Entourage hooked up with First and Ten and each assumed the other was using protection.

But just when you think you have Ballers pegged, it reveals that there are warning lights on the expensive dashboard, sharks circling in the hot tub. The tipoff is Spence’s job: his firm wants him to “monetize his relationships,” i.e., signing up hot players to manage the money gushers that will dry up while they are still young. (As happened to Spence: we soon learn that, while he’s putting on a shiny front to drum up business, he’s near-broke.)

It’s a timely focus: a recent National Bureau of Economic Research study found nearly 16% of players went bankrupt within 12 years of retirement–which retirement, of course, could come from an injury on any play. That’s not the only current NFL woe here. Spence, like many former players, is showing possible signs of concussive syndrome; he’s in denial, but chomps painkillers like corn nuts and keeps having PTSD-like flashbacks to a brutal hit he delivered against an unfortunate quarterback. The league’s domestic-abuse troubles haven’t arisen yet–HBO sent out the first four episodes–but off-field violence has.

The history of portraying the dark side of the NFL on TV is not a proud one, if you recall the quashing of ESPN’s Playmakers under pressure from the league. Ballers is hardly that dark, but, HBO says, the network is making the series without the league’s involvement or consent.

Like Starz’s impressive Survivor’s Remorse–also about athletes, largely African American and many who grew up with little–Ballers is a swaggery comedy that nonetheless has plenty of drama. (The series was created by Stephen Levinson of Entourage and Boardwalk Empire, but producers include Peter Berg, who explored the highs and lows of football in Friday Night Lights–and has a recurring role as a coach here.)

Johnson is the show’s MVP–he’s suave and charming as hell as Spence, a trained predator on the field rechanneling his energies into savvy sweet talk. (Given The Rock’s recent ubiquity in Furious Seven and San Andreas, this is a little like HBO’s lucky timing with Matthew McConaughey last year.) The ensemble around him represents the cycle of pro life: Vernon (Donovan Carter), a red-hot rookie getting bled by his hangers-on; Ricky (John David Washington), a troubled receiver looking for another chance in Miami; and retired Charles (Omar Miller), scrambling to find a day job. (As Spence’s coworker, Rob Corddry has a comic-relief role that’s not as strictly comic as you might guess.)

Ballers is hardly a must-watch yet, and the early episodes rely on a lot of familiar problems-of-fame stories. But it has potential, and its timing just might be right. Ballers shares some of Entourage‘s wish-fulfillment, it’s-all-good ethos. But Ballers is also constantly aware that it could go all bad on any given Sunday.

In TV as in sports, you have your Cinderella franchises that turn scrappy unknowns into winners. And then you have the teams that sign an who’s-who of famous names and have nothing to show for it. That’s HBO’s insipid geopolitical comedy The Brink (also premieres June 21), which enlists Jack Black, Tim Robbins, Aasif Mandvi, Pablo Schreiber and supporting players including Carla Gugino and John Larroquette in a doomed suicide mission to spoof America’s entanglements in Pakistan.

I’d say “satirize” instead of “spoof,” but even bad satires have something to say. The Brink, built around a doomsday crisis involving a ruthless Pakistani general, the country’s nuclear arsenal, a drugged-out fighter pilot and various venal American diplomats and politicians, has no point of view beyond, “Damn, people are crazy”: it’s the geocomedy equivalent of a shruggie symbol with dick and barf jokes. You can build a political-comedy engine fueled on nothing more than cynicism–Veep pulls it off every season–but you need prime material, not broad, caricatured, warmed-over Dr. Strangelove with more full-frontal.

Maybe the show’s mad-mad-world-war style is meant to be a throwback, down to the title-credits art, which features a finger on a Cold War-vintage button. But The Brink is far more likely to trigger a hasty finger on your TV remote. 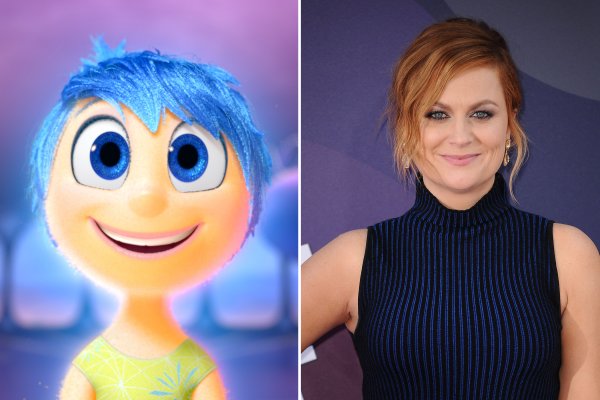 Meet the Emotions of Pixar's Inside Out
Next Up: Editor's Pick