It was midway through the French Open final on June 7, and Serena Williams’ F bombs were flying faster than her bullet serves. “Aaaaaaaah!” and “Come on!” and choice four-letter exertions echoed around the red clay court as the world’s best women’s player bumbled away a comfortable advantage over lower-seeded Lucie Safarova. “I’m like, ‘How can you miss that, Serena? What are you doing out there?'” Williams tells TIME. “‘You make this shot a million times. Why are you missing it now?’ I’m trying to get myself boosted.” Tied 2-2 in the decisive third set, Williams aced Safarova and dropped another loud F bomb. Boosted. She would go on to win four straight games, closing out her 20th major tournament victory and pulling within two more of the Grand Slam, a sweep of all four major tournaments (the Australian, French and U.S. Opens, as well as Wimbledon) in the same calendar year and the rarest prize in tennis. That Williams did it while dealing with a nasty flu–she spent a few days in bed after the win–floored even those who have a personal stake in the Greatest of All Time debate. “The way she digs her way out of holes,” marvels tennis legend Chris Evert, “is not human, really.”

For the first time, at 33 years old and in the 20th year of a professional career that many in the tennis world wrote off a decade ago–too focused on fashion, too prone to injury, too disengaged–Williams will enter Wimbledon on June 29 having won both the Australian and French Opens in the same year. No women’s player has gotten this close to a Grand Slam since Jennifer Capriati in 2001. Actually winning one is rarer still. No player has won the Slam since Steffi Graf in 1988. The last man to do it was Rod Laver in 1969–a drought nine years longer than that other famous interlude between winning streaks, the just-ended wait for horse racing’s Triple Crown.

And no wonder. The Grand Slam requires winning 28 straight matches, on three different surfaces, on three different continents. Players start off on the sturdy hard courts in Australia, then slide on dirt chasing the slow, high bounces at Roland Garros. They adjust a few weeks later to the fast, low bounces of Wimbledon grass before returning to the hard stuff in front of boisterous U.S. Open crowds. Each surface caters to different strengths. Plus, for Williams’ opponents, facing her is often the match of their lives. “There are a lot of players who would love to beat you because their careers are on the line,” says Laver. With a Slam in reach, the target on Williams’ back only gets bigger.

On the phone from her home in South Florida a few hours after arriving from Paris, Williams says she has finally learned how to take the pressure in stride. “I don’t feel like if I don’t get a Grand Slam, it’s going to ruin my career,” she says. “I don’t need that to define my career.”

There is a certain Zen to Williams these days–on-court sailor mouth aside. The first five times she won the Australian, Williams flamed out in the Paris dirt. She admits that thoughts of a Slam led her to press too hard. “Generally, I put a lot of pressure on myself, but now I’m putting less and less,” Williams says. “And I’m getting better and better. If I had just thought of this equation years ago, it could have been crazy.”

The chilled-out Williams has been on a serious roll, having won three straight majors dating back to the 2014 U.S. Open. She’s the oldest player in history to take three in a row. “Holding three at my age is pretty awesome,” she says. With expectations raised about a Slam, “that’s being a little undermined.” If she wins Wimbledon, Williams will clinch her second “Serena Slam”–the nickname given to her sweep of four straight majors, over two calendar years, in 2002–03–a dozen years after her first.

Indeed, Williams’ gritty, how-did-she-do-that play over the past three years, a period in which she’s won seven major championships, should put to rest any question about her being the greatest women’s tennis player. She may even be the greatest female athlete in history, given that she’s in her second decade of dominance. Top players face more global competition than in past eras; we may never see another athlete who combines Williams’ skill, power and speed. And yet. “To get to the Grand Slam, that’s going to be really hard to do,” Williams says. “If you do think about it”–no, Serena, don’t!–“I would have to win five in a row. And that is, um, a lot.”

She will surely need some breaks along the way. Margaret Court says that in 1970, the year she won her Grand Slam, she played the Wimbledon final after getting an injection for a torn ankle ligament. It was about to wear off before she beat Billie Jean King in two marathon sets, 14-12, 11-9. “If it went to a third set,” Court says, “I would have lost.” The U.S. Open final won by Laver to clinch his 1969 Slam–a match then played on New York City grass, not hard court–was delayed a day because of rain. “A helicopter hovered over to try and dry it out,” says Laver. “I think it brought up more water.” He put on a pair of spikes during that final, to secure some footing in the slop. His opponent, Tony Roche, didn’t, and Laver won in four sets.

Should Williams get to New York in late August with the first three majors under her belt, the hoopla would be epic. “It will be huge today to pull off a Grand Slam,” says Laver as he recalls the relative quiet of his Slam pursuits. “There were probably 10 or 12 reporters interviewing me for various things after the matches. There was no real buildup.” Evert, winner of 18 major titles–though neither she nor rival Martina Navratilova won the Australian and French in the same year–calls Williams the “greatest of all time.” She’s rooting for her to win the Slam. And she suggests that Williams could help her cause by lying low after Wimbledon. “Go hibernate for a month,” Evert says. “Go live in a cave.”

First, Williams has to get through Wimbledon’s unpredictable grass. The fast surface plays to her power game: three years ago she set a Wimbledon record for most aces in one match, 24, in a semifinal win. She already has five Wimbledon titles, but a tough field looms in southwest London. Defending champion Petra Kvitova, a big-hitting Czech lefty, has won the tournament in two of the past four years. Sister Venus, another five-time Wimbledon champ who also plays best on grass and nearly knocked off Kvitova last year, could throw a familial wrench in Williams’ march to history.

And then there are the ghosts of recent Wimbledons past. Williams hasn’t made it through the round of 16 at the All England Club since 2012, and last year she was so disoriented during a doubles match with Venus that she couldn’t serve the ball over the net. (She was suffering from a viral infection.) 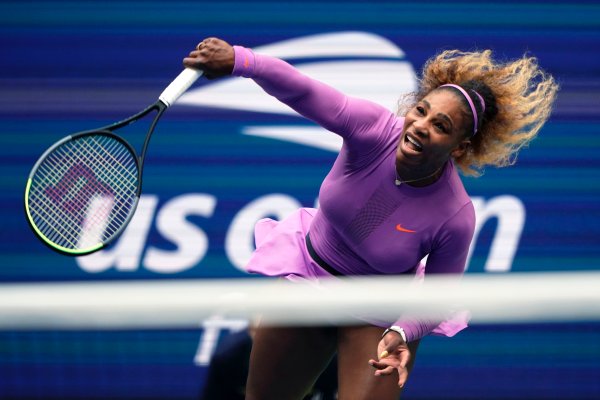