Why Rachel Dolezal’s Hair Is Actually a Big Deal

If you’ve turned on any connection to the outside world in the past week, you’ve heard the name Rachel Dolezal. If not, the basic details are that a Caucasian woman has been masquerading as a Black woman for years. So successfully, in fact, that she became the president of her local NAACP chapter in Spokane, Washington.

The issue only came to light when her parents (who are, no surprise, Caucasian themselves) blew the whistle on the whole thing, sending the Internet and news-consuming public into a frenzy. Questions have been asked and artfully dodged, Twitter is rife with hashtags, and journalists continue delving deeper into this story.

But what seems to be causing a good amount of controversy, despite the obvious deceit and fact that she’s donned blackface for years, is that she completely altered her appearance by wearing traditionally African-American hairstyles. In a new interview with NBCBLK reporter Amber Payne, Dolezal admits that her current “natural curls” are actually a weave. But it’s not just natural curls she’s been mimicking. Dolezal can be seen in a number of photos sporting locs and braids — a stark contrast to the Judy Blume-esque photos of her younger self with long, smooth blonde hair and sparkling blue eyes.

Black women are up in arms that she’s appropriated these hairstyles to complete her image. Others are asking, what’s the big deal? You can do what you want with your hair, right?

First of all, these hairstyles, in the hands of Rachel Dolezal, are a lie. She realized that by altering the texture and style of her hair to mimic traditional styles, she’d get a legitimate pass within the Black community. Her entry into this hairstyle category was to cover her tracks, and every subsequent hairstyle variation was just a continuation of that deceit. But we have to call it what it is: a big, hairy lie.

Second, cultural appropriation is a very sensitive topic in the Black community. Caucasians riding in, seeing something cool, and stealing it for mainstream White America is something that has happened for years. People who would never sit next to a Black woman on the bus suddenly sported cornrows on vacation after Bo Derek bounced down the beach in them in the ’80s. The scent of tightly wound perms permeated our malls as white women rushed to get their version of a jheri curl. Alternative college kids get dreadlocks without understanding the fierce history behind the style. The trend of every white woman in Hollywood getting ten new pounds of hair woven into her head started in Black salons in the ghettos of the country. I’m not saying that Black women created everything. What I’m saying is that no credit is given as to the origin of these styles. Are we kind of mad about it? Why, yes. Yes, we are. Because it’s not about credit so much as it’s about respect.

Finally, there’s a lot of struggle in those curls and braids. Dolezal mentioned in an interview withTODAY’s Matt Lauer that she’s had to “struggle” and “persevere” in her life as someone who “identifies” as Black, but I’d argue tanning and altering your hair texture couldn’t help you understand the pain, fear, and anger of what it means to be Black in America. Mimicking natural curls skips all the angst those of us felt who decided to stop chemically burning our hair to make it Caucasian in texture. She didn’t have to chop off all her hair and wake up crying because every morning in the mirror is an identity struggle. Her locs can’t convey the fear Black mothers have every time their children go out to play, knowing they might never come back. None of her braids can download years of watching your community struggle and fight for economic opportunity, against prejudice and drug violence, and toward prosperity while riddled with broken homes, gang warfare, education issues, and extreme poverty.

Dolezal once gave a talk about natural hair and self-acceptance, all while mimicking hairstyles bathed in rich cultures and soaked with the real pain and struggle of others. If there’s pain to be felt here, it’s that she lied to the faces of the people she claims to love while dressed to play the part. The wolf came to the door in sheep’s clothing, and we placed her lies on a pedestal.

Does this mean that women who happen to be of Caucasian or other racial background need to avoid traditionally Black hairstyles? The answer is not really, but please examine your motives and come with love and complete honesty. Because sometimes it feels like the world is against Black women, like the world feels everything we are and everything we have is theirs for the taking. It feels like we can’t move forward because the world is… well, standing on our hair.

What Dolezal has done is appropriated traditionally Black hairstyles to change her appearance for personal gain. I believe this is where the line must be drawn. All the good she did could have been accomplished with blonde, flowing hair. But the lies she told have just sunken deeper into scars that run straight to the bone. Another chapter of pain that sinks down where it hurts, into every strand of our being…

Which, yes, includes our hair. 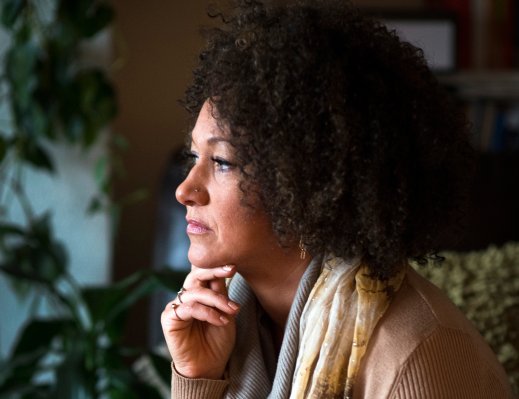 Rachel Dolezal Investigated for Ethics Violations
Next Up: Editor's Pick