The Pope Who Paved the Way for Francis' Encyclical on Climate

On Thursday, when Pope Francis issued a much-anticipated encyclical (“a letter from the Pope to the bishops of the Roman Catholic Church, setting forth his views on anything he chooses for serious consideration, but not necessarily an infallible document,” as TIME once explained), he tackled one of today’s most controversial and pressing topics: the environment, and the climate’s impact on poverty.

The choice of topic drew criticism even before its publication. On Monday, Jeb Bush became the latest politician to posit that the Catholic Church should stay out of political and economic issues. But it’s actually been more than a century since the papacy changed its stance in favor of engaging with contemporary debates. One reason for that change was another papal encyclical, one of the most influential such letters in Vatican history: Rerum Novarum.

In the late 19th century, the Church’s long-strained relationship with wealth was being tested anew by the rise of unionism and socialism. Catholic leaders discouraged their flocks from participating in the then-growing labor movements. Pope Leo XIII saw that this situation would not do: though the Church was not a socialist organization, opposing the movements had the effect of alienating followers who just wanted a decent wage, higher living standards and a more fulfilling life. His response was Rerum Novarum, published in 1891. Its title—encyclicals take their names from the first words of the document—translates as “Concerning New Things.” It was a strong statement that the Church was paying attention to the world around it.

In 1931, when Pope Pius XI celebrated its 40th anniversary with his own encyclical, Quadragesima Anno (“In the 40th Year”), which addressed the social problems of the modern world, he called the earlier document the Magna Carta of the Church’s involvement in social justice. As TIME put it back then:

One of the great qualities of Rerum Novarum, TIME noted when another decade had passed, was that its message could be adapted to its times: the support of the common people was unceasing, but the enemy evolved. Where socialism had been rejected in the 19th century for its focus on material goods, that rejection could later be applied to communism and then to Naziism. In later years, Rerum Novarum was also used as the theological basis for the Church’s support of Latin American Catholics who were opposing dictatorships, a policy that affected Pope Francis’ homeland of Argentina, where priests who opposed Juan Perón rose in power.

Rerum Novarum continued to influence the popes of the 20th century. Mater et Magistra (“Mother and Teacher”) was John XXIII’s response to the 70th anniversary of Rerum Novarum, and an attempt to bring its message firmly into the 20th century by addressing pressing global issues like the population boom and the power of technology for good and evil. Though he didn’t cite Communism by name, John XXIII continued his predecessors’ opposition to such movements—all while supporting non-ism “socialization,” or the general theory of working together (eg. through welfare programs) to help others in a society. His 1963 Pacem in Terris (“Peace on Earth”) continued the progressive and modern themes. In 1967, Pope Paul VI continued the trend with Populorum Progressio (“The Development of Peoples”), an encyclical that TIME joked “looked in some ways as if it had been drawn from a U.N. economic report.”

With his encyclical on climate change, Pope Francis is simply continuing a 124-year-old tradition. 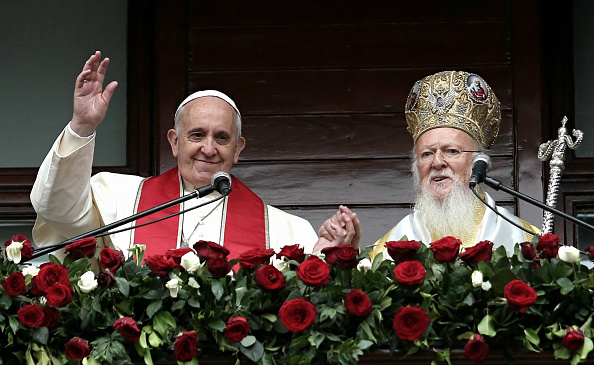 Head of Orthodox Church Responds to Encylical
Next Up: Editor's Pick