7 Ways These Rolling Robots With Screens Could Change Our Lives

Most days, here are no actual humans manning the Suitable Technologies store on the main drag in Palo Alto, Calif. Instead, the salespeople remotely “beam in” from places like Hawaii and New York to operate the company’s roving BeamPro robots, five-foot tall rolling devices with speakers and screens on top. One of the robots has a leaf blower attached. Another one does a routine where the “pilot” drives it across the street to buy ice cream for potential buyers.

It’s a cute gimmick. But as these machines get more advanced, they could seriously change the way distance affects people’s lives. Here are seven ways how:

Helping families connect to each other and their homes. In a recent episode of Modern Family, Phil gets grounded by an ear infection and is unable to return home for his daughter Alex’s graduation party. So he sets up a robot (this $2,500 one made by Double Robotics) to act as his surrogate.

The subplot makes it clear that this early generation of wheeled machines has limitations—like not being great at going down stairs. But one can also see how much richer the connection is than handing a phone around from person to person. And you might notice that no one else has to sacrifice what they’re doing to take care of faux Phil, like what happens to the relative who gets stuck lugging a Skyping relative around on a laptop.

Today in the Suitable Technologies store is actual breathing human Tom Wyatt, a VP of sales at the company. He talks about how people have used the robots—both the $17,000 enterprise version and the $2,000 consumer version—to be virtual wedding guests and family reunion-ers. He has one in his house that his daughter, off at college, uses to have dinner with the family or sit around watching a San Francisco Giants baseball game with her brothers.

Improving elder care. Other customers have bought the robots to stay better connected to aging parents. Because machines like the BeamPro can be controlled remotely, those aging parents never have to turn it on, control it or remember to charge it. Kids can check in to make sure they’re okay or that they’ve taken their medicine. Various robot manufacturers are making deals with assisted living facilities, who are touting these gadgets as an amenity that helps keep families connected once someone needs full-time care. There’s more potential for interaction than with a phone or computer screen, too — the robot can take a stroll down the hall with Nana, for instance. As people get older, they often get isolated. Social interactions that can really simulate having a human in the room could have serious health benefits.

Making the business world smaller. As these robots get cheaper, there will be more consumer usage. But the early adopters have been big businesses like Google who are using them to attract the best talent (“No need to move to Mountain View!”) and make collaboration better when all the key people can’t be in the room together. Though there are various companies making these roaming machines, Wyatt says he sees Suitable’s biggest competitor as traditional video conferencing. The situations where the robots thrive are ones where there needs to be movement or a greater sense of presence.

Rolling robots have given keynote speeches, moving around the stage like speakers would stroll. Convention centers have purchased them so they can rent them out by the hour to people who want to be at a conference for a half-day instead of shelling out for the plane ticket, hotel and so forth. Business owners who need to keep an eye on their factories in China have used them to check up on things so they have to make the trip half as often.

“You’re in a situation where you have a limited number of visits that each guy can do to each campus,” he says, alluding to NCAA regulations. “So this kid is in Iowa—or wherever—can beam in, drive around the athletic building, look at the weight facilities, plug in the 4G card, drive over to the practice facility, drive over to the stadium.”

Touring schools by robot could become standard practice for kids in the future, making the process of choosing a college far more economical. Tech companies and other businesses, meanwhile, can use the same scheme to lure future employees.

Making culture accessible. Institutions like the Smithsonian have used rolling robots to help bring the museum experience to disabled people. Rolling along viewing paintings and artifacts with a docent, people from all over the world can see exhibits up close. As machines get more rugged and have more robust connectivity, Yellowstone or Yosemite could have them on hand for visitors to explore national parks. Machines like the BeamPro come with technology similar to the type cars use to brake automatically when the vehicle detects something in front of it—like a kid running into the street—which can help make sure no one is driving these off cliffs.

Changing real estate. Real estate agents are using rolling robots to give people virtual tours of spaces they might want to purchase, like the couple from New York interested in a San Francisco apartment.

“People say, I’d love to buy that place, but what does my view look like? And what do the amenities look like?” says Wyatt. Right now, Suitable’s machines are being used mostly in static places—like a condo complex in Hawaii. But the robots could be popped in and out of an agent’s trunk and used all over the place, so long as they shelled out for a 4G connection or had listings with stable Wi-Fi.

Outsourcing jobs. At the Suitable Technologies store, the jobs are outsourced to make a point. But there are other human jobs that could be outsourced via rolling robots to save companies money, which could be unpopular with locals. Take the example of a security guard wandering around a parking lot on the Facebook campus in Menlo Park. A computer can’t do that job, but “there’s a guy in Nebraska that would probably be very willing to have that job and at a lower wage than anyone would around here,” Wyatt says.

Teachers could command a classroom remotely and wander down the hall to the faculty lounge. Specialist doctors could go up and down a hallway visiting bedridden patients, rather than being reliant on video equipment in every room. Wyatt has sold some robots to clinicians who want to be in more than one place.

“It’s that freedom and control piece that makes a difference,” he says. “It’s not that the traditional video conferencing system doesn’t work. It’s just limiting.” 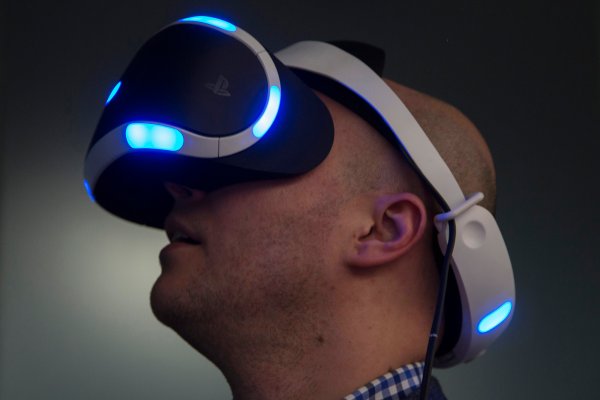 Here's When Sony's Virtual Reality Headset Is Coming Out
Next Up: Editor's Pick