By Alex Altman and Charlotte Alter

A seasoned showman knows how to prime his audience, and Donald Trump is one of the best. Standing in the gleaming lobby of a skyscraper bearing his name, the biggest name in business held court for nearly an hour, the cameras and the crowd hanging on his every word, before finally arriving at the big reveal.

With Trump, it is always about the money. His announcement Tuesday that he would run for President of the United States, after nearly three decades of feints and false promises, was mere prelude to the business that really mattered.

For the crowd gathered at Trump Tower on Manhattan’s Fifth Avenue, the symbols of his status were ubiquitous. Employees sold Trump power ties, Trump polo shirts, Trump ice cream. There were Trump chocolates shaped like bricks of gold and silver, wrapped in glittering foil. Beautiful women hawked a Trump-brand cologne called “Success.” The Phantom of the Opera soundtrack echoed off gold-tinted mirrors and red marble. The emotional core of Trump’s speech was a recitation of his real-estate assets: the Gucci Store, the Bank of America building, the $15 million apartments, the lush golf courses and eponymous hotels.

Trump has always known that the pageantry of a presidential campaign is a near-perfect marketing opportunity. He has been running this ruse since 1987, the first time he ruminated about replacing the permanent political class that had made America a “laughingstock.” He has gone farther this time to sell the fantasy, hiring political staff in states like Iowa and New Hampshire. But the success of the stunt will still be measured in money, not votes.

After all, there are about eight billion reasons Trump won’t be president. He was pro-choice until recently. He supported massive taxes on the ultra-rich. He has advocated tightening gun laws. He backed single-payer healthcare, a policy that conservatives abhor even more than Obamacare. His approvals are 32 points underwater in his own party, making Trump the least popular presidential candidate since at least 1980. If he wants to swap the executive boardrooms for the cornfields of Iowa, that is his business.

Read More: How to Get Hair Like Donald Trump

The fact that such a stunt can pay off is a symptom of how flawed the process has become. Trump is hardly the first enterprising businessman to recognize that the endless primary can be vehicle for personal enrichment. But in a race that rewards bluster and penalizes substance, serious candidates are likely to get Trumped. Only 10 candidates will make the stage at the first Fox News debate on Aug. 6; the remainder will be relegated to a forum earlier in the day. The CNN debate the following month will use a similar system, shunting the rest of the candidates into a second-tier debate. National polls will be the deciding metric, which means a guy with his own primetime TV show—and the name recognition that attends it—is apt to boot more legitimate candidates.

It is unlikely that the party could find a way to exclude him from the debate stage, if indeed they wanted to. “This sounds crazy, but it’s safer to just include him,” says one 2016 presidential aide. Trump is a draw; for years he’s been invited to address Republican Party fundraisers. Every four years, candidates made the trek to Trump Tower to flatter him and solicit support. “They come up to my office,” Trump boasts. “I’m meeting with three of them in the next week.”

The GOP’s approach to Trump has always been grudging tolerance, knowing his megaphone makes a good cudgel. Already he has been needling candidates like Jeb Bush. “They will never make America great again,” Trump says of his rivals. “They don’t even have a chance.”

Trump talks of the nation like another of his renovation projects, a dilapidated teardown that needs to be gutted to the studs. “The American Dream is dead,” he declares. “We don’t have victories anymore,” he says. “The U.S. has become a dumping ground for everybody else’s problems.” The crowd roared at the line.

The target of these riffs is not people like him. Trump is skilled at speaking to fearful blue-collar workers, to whom the glittering Trump brand can look like genuine luxury. “We have to get back to America being the superpower we were, and the only way we can do that is with a businessman in office. ” says Lori Burch, 55, a superintendent from Jersey City. “He’s an awesome American,” adds Nadine Steel, a 30-something sales rep at a department store in Hackensack. “I think he’s a friend of the rich, but I also think he’s a friend of the poor.”

The crowds couldn’t match the bluster. In his speech, Trump said there were “thousands” of people on hand to watch the announcement— really, it seemed more like a few hundred. Staffers handed out “Make America Great Again!” T-shirts outside the Gucci on Fifth, while others distributed Trump signs to the crowd, designed to look as if they’d been made at home. The supporters who turned out seemed positive Trump would be the next president. “I don’t think there’s anybody as strong as the Donald,” says Burch.

What would Trump do as President? “I would do various things very quickly,” he says. Crush the Islamic State. Beat China. Build a “great great wall” on the southern border and send the bill to Mexico. Is this even possible? Does it matter? Whether people are wise to the game has never made a difference to Trump, so long as the show helps the bottom line.

With reporting by Zeke J Miller

Most Popular on TIME
1
Biden's Sign Language Interpreter Tied to Far Right
2
Why Has GameStop's Stock Gone Up So High Recently?
3
What President Biden's Call With Putin Means for U.S.-Russia Relations

Write to Alex Altman at alex_altman@timemagazine.com and Charlotte Alter at charlotte.alter@time.com. 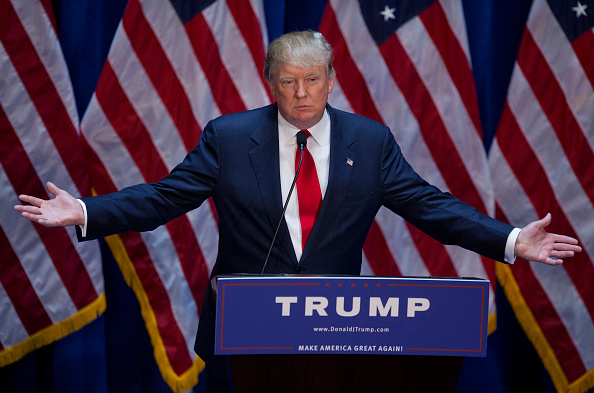