Scientists have long wondered why the dinosaurs that spread across the globe 230 million years ago largely avoided living near the equator—and now the mystery has finally been solved.

A group of scientists at the University of Utah found that the tropical climate around the equator vacillated between long dry spells and fiery heat that set vegetation ablaze, according to the study, released on Monday. With no consistent source of vegetative food, large plant-eating dinosaurs were unable to live in the region. Instead, only a few small meat-eating dinosaurs were able to find a food source near the equator.

The study is the first to provide a detailed look at Earth’s climate and ecology during the time when dinosaurs were emerging. Researchers found that the carbon dioxide levels during this period were four to six times the current levels—which the scientists say should provide a warning for the future.

“If we continue along our present course, similar conditions in a high-CO2 world may develop, and suppress low-latitude ecosystems,” said Randal Irmis, a co-author of the study.

Carbon dioxide levels in the atmosphere reached a record high for modern times in 2013. 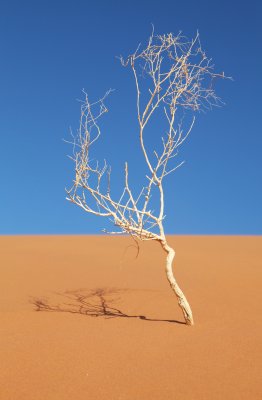