Rachel Dolezal has spoken out about the “complexity” of her identity for the first time since news broke that she had been masquerading as a black woman despite her white roots.

In an interview on NBC’s Today Show, the former leader of Spokane’s NAACP said she identifies as black and has for a long time. “This is not some freak, Birth of a Nation blackface performance,” she said. “This is on a real connected level how I’ve had to go there with the experience.”

Dolezal says she has few regrets in regard to interviews she’s done over the years where she hasn’t been particularly clear about her race or “racial identity,” but ultimately she wouldn’t do anything differently.

“My life has been one of survival,” Dolezal said on Tuesday. ” The decisions I’ve made along the way, including my identification, have been to survive.”

Dolezal’s appearance and story have spurred controversy in the days since her parents told news reporters that she is Caucasian, not African-American, as she’s been telling people over the past several years.

But the activist said she had identified as black since she was about five years old. “I was drawing self-portraits with the brown crayon instead of the peach crayon,” she said.

Amid the backlash, Dolezal also lost her post as a part-time professor of Africana studies at Eastern Washington University. The Smoking Gun reported she had once sued Howard University, a historically black institution, for discriminating against her because she was white.

And on Monday, Dolezal resigned as the president of the Spokane chapter of the NAACP. In a Facebook post, the 37-year-old said despite stepping down she would “never stop fighting for human rights.”

“This is not about me,” she wrote. “It’s about justice. This is not me quitting; this is a continuum.” 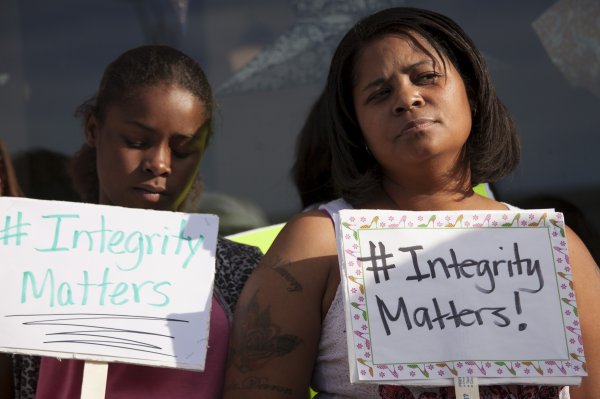 Dolezal's Brother Calls Her Actions 'Blackface'
Next Up: Editor's Pick