See How the First SAT Compared to Today's Test

The math section required little knowledge beyond basic arithmetic, and the test itself took just over an hour and a half, but the first SAT wasn’t any easier than the one tormenting high school seniors in our era.

On this day, June 23, in 1926, when the first batch of college applicants struggled through the Scholastic Aptitude Test, they were given 97 minutes to answer 315 questions—meaning that to complete the test, they’d have to answer about three questions per minute. No one was expected to finish the entire thing.

While the time pressure was more intense than in today’s test—which provides a luxurious three hours and 45 minutes to answer 170 questions and write an essay—it did streamline the process for applicants to the nation’s top colleges, who’d previously had to take a different essay-based test for each college they applied to. “Up until that time, if you wanted to apply to Harvard, you did that totally differently than how you applied to Yale versus how you applied to Princeton,” an official with the College Board, which produces and administers the SAT, told Smithsonian Magazine in 2013.

Just as the test itself has stood the test of time, so has controversy surrounding it. Although the SAT was adapted from the IQ test used by the U.S. Army during World War I, per the New York Times, and intended to measure innate intelligence—regardless of class or race—it has been plagued by accusations of elitism throughout much of its nearly 90-year history. This original iteration in particular served a highly select demographic: Of the 8,040 college candidates who took the first test, 60% were male, according to a PBS Frontline special on the SAT. Most of the men were applying to Yale; most of the women were hoping to get into Smith.

To matriculate along with the upper crust of 1920s high school society, you’d have to demonstrate knowledge in a number of areas, including:

Arithmetic: “If a package containing twenty cigarettes costs fifteen cents, how many cigarettes can be bought for ninety cents?”

Classification (Instructions: Each group contains six words. Three of these are related to each other in some definite way. Indicate which three are MOST CLOSELY RELATED): Group 1. anemia, tuberculosis, sickness, diphtheria, typhoid, doctor.

Paragraph Reading (In each paragraph, one word has been substituted for another word and spoils the meaning of the paragraph. Find this word and cross it out): “We were informed that the lady of his heart, when living, received the addresses of several who made love to her, and did not only give each of them discouragement, but made everyone that she conversed with believe that she regarded him with an eye of kindness.”

How well you do will be your own best guess: According to the Washington Post, which published the full test online last year, the answer key has been lost to the ages.

Read a 1950 article about the test, here in TIME’s archives: Cure for Chaos 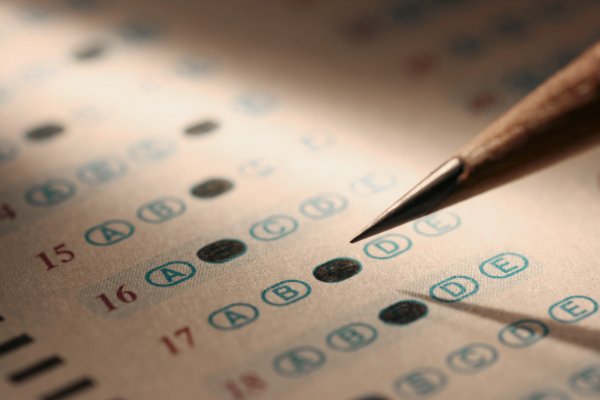 Big Changes Coming to SAT in 2016
Next Up: Editor's Pick