Sen. Marco Rubio: Under Obama the World Has Become a More Dangerous Place

In February 2011, I stepped into my first classified briefing as a member of the Senate’s intelligence committee. The focus that day was on the Arab Spring that had begun to unfold in North Africa, and part of the Monday morning quarterbacking that day was about what more our intelligence community could have done—or what resources they needed—to better anticipate such a consequential turn of events. Those would be the first of hundreds of hours I would spend over the next four and a half years overseeing our nation’s intelligence services and programs, and regularly considering what more we can be doing to equip our intelligence services with the tools they need to keep us safe.

During this period, I’ve seen the consequences that President Barack Obama’s foreign policy has had on the world and our interests abroad. Under his leadership, the world has become a more dangerous place, our allies doubt whether America is still a nation of its word when it comes to our security commitments, and we’ve embarked on a dangerous unilateral disarmament of intelligence-gathering tools through policy reversals from the White House and mindless budget cuts due to sequestration.

This month, the Obama administration will begin the process of dismantling one such program that has helped to keep our people safe since the 9/11 terrorist attacks. This so-called “Section 215 metadata program” authorized by the Patriot Act, which was closely overseen by Congress and the courts for more than a decade, has allowed us to thwart terrorist plots.

Contrary to the popularly accepted lie that this program allowed the U.S. government to spy on Americans and listen in on their phone calls, it simply enabled business records to be collected by phone companies and stored by the National Security Agency in a database that could be checked only when there was a known or suspected terrorist nexus. This program received rigorous oversight from Congress and the judiciary.

Unfortunately, misinformation, fear-mongering and the allure of campaign fundraising all contributed to its expiration, its explicit prohibition in the future, and its replacement with a weaker and untested system that fails to require phone companies to maintain records that we may one day need to track terrorists. Rather than use what power remains in his bully pulpit, President Obama opted to be a bystander and let this program be killed, even though he had previously championed it. Even worse, the White House clearly sent the message to the heads of the intelligence agencies that they needed to stand down from advocating for the program. As a result, the American people are now less safe.

Treating terrorism like a purely law enforcement function and returning our intelligence community to a pre-9/11 footing needlessly exposes the American people to the dangers of a radically changed and more dangerous world. A major challenge for the next president will be to fix the weakened intelligence system that the current one is leaving behind.

This will entail re-equipping our intelligence community with the authorities to quickly connect the dots between terrorist conspirators and ensure the intelligence community has the ability and tools to efficiently narrow the focus of an investigation to uncover plots and save valuable time and resources in the course of terrorist investigations in which time is absolutely of the essence.

With the right tools and a dedicated workforce, we can protect our people and our homeland from another terrorist attack while remaining true to our identity as the freest nation on earth. This belief is not based on a theory, on a campaign briefing, or on something I read in a book or newspaper. It’s based on four and a half years of seeing the results with my own eyes.

We need clear leadership from the commander-in-chief to confront the myriad of national security challenges facing the nation. It is increasingly clear that the task of ensuring that those we entrust to protect us have every tool they need for the job will fall to the next president. It is also apparent that through their demagoguery on this issue, through their support for abandoning these crucial programs or through their outright silence that some who aspire to that office are not up to the challenge any more than President Obama is. There is no duty more important than rising to this challenge because Americans lives are on the line. 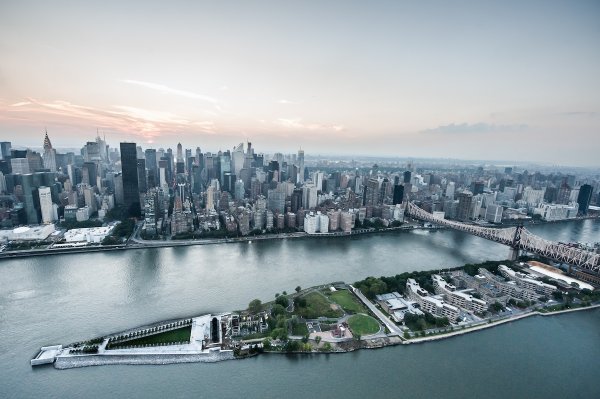 Hillary Clinton's Campaign Launch Site Once Held the Worst Prison in the World
Next Up: Editor's Pick